PRIOR TO WORLD WAR I, it was virtually unheard of to have a woman working in the hospitality industry. Women occasionally worked alongside their husbands to operate B&Bs, and the rare pensione was female-run; but as the men went off to war, the need for extra help in hotels gave rise to women entering the industry.

“Historically, women employees in hospitality were mostly in entry-level positions such as room attendants, servers and assistants,” says Vanja Bogicevic, clinical assistant professor, Jonathan M. Tisch Center of Hospitality at the NYU School of Professional Studies. “Only in the ’80s did women enter the hospitality leadership positions in larger numbers, and this progress has continued exponentially, though there is still much place for improvement.”

According to the Castell Project’s annual benchmark report, “Women in Hospitality Industry Leadership 2019,” women today comprise 11 percent of leadership roles such as directors, senior management, executives or partners, and more are being promoted to president roles or becoming owners. The numbers will continue to grow, as women now make up the majority of many of the world’s top hospitality schools’ student populations.

Ultimately, a woman-led hotel is just that: a hotel. Although women have been grossly underrepresented in the hospitality field for many decades, the women now rising to the top of the industry do so alongside their male peers by offering an unparalleled level of customer service and a truly unique approach to customer satisfaction. From a five-diamond resort with a family-friendly focus outside of Pittsburgh to a mother and daughter-run safari lodge in Kenya, here are some of the world’s greatest hotels … which happen to be run by women.

NAMED AFTER THE SWAHILI WORD for “suspended in midair,” Angama Mara perches high above the Maasai Mara game reserve in Kenya on the site where numerous scenes from the movie Out of Africa were filmed. When the resort opened in 2015, it redefined the standards of luxury and experiential travel among Kenya’s safari lodges. This expansive property features 30 luxury tented suites, each looked after by owner Nicky Fitzgerald, who runs the property alongside her daughter, Kate. Fitzgerald has been in the hotel industry for more than 38 years, operating more than 60 luxury lodges across Africa and India. “This long journey was undertaken with Steve, my husband, very much at my side; and when he passed away two years ago, I took over the running of the company and am now, in my autumn years,” CEO Fitzgerald explains. “Our lodge is in the heart of Kenya’s Maasailand. The Maasai are a male-dominated society, and as a woman from South Africa, I respect that and daily seek solutions how to overcome this. I am up to the challenge!”

WHEN LIZ LAMBERT RETURNED to her native Texas in 1994 to work in the Attorney General’s office in Austin, the thought of owning a hotel was just a fantasy. After a chance meeting with a local hotel owner, Lambert found herself the owner of the run-down motor court hotel on South Congress Avenue. She set to work raising funds to renovate the property, and in 2000 the Hotel San José opened and transformed its neighborhood with its upscale makeover and bohemian vibes. Lambert’s success with her first hotel renovation led her to launch Bunkhouse Group, a hospitality company founded on the pillars of design, music and community-driven experiences. Her portfolio of hotels now includes El Cosmico, the Austin Motel, Hotel Saint Cecilia, Hotel Havana, Hotel San Cristóbal Baja, The Phoenix Hotel and Hotel Magdalena, along with a series of popular Austin coffee shops called Jo’s Coffee. 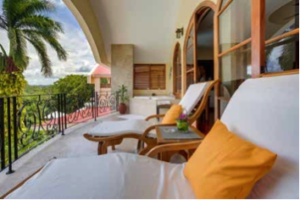 IT WAS NO COINCIDENCE that 1994 was the year Her Majesty Queen Elizabeth II visited the San Ignacio Resort Hotel in Belize and also the year the hotel transitioned its ownership to four sisters. Mariam Bedran Roberson and her three sisters (Terry Bedran Carter, Nazle Bedran Kuylen and Paulita Bedran Figueroa) only realized later in life their father had been grooming them to take over the family’s property. They learned every aspect of running the business before assuming leadership in 1994, when they began the work of moving their development plan toward a higher-end market. The family culture of the hotel remains, but the property is now the only luxury resort hotel within walking distance of the town of San Ignacio. Along with updating rooms and meeting spaces, the sisters started the Green Iguana Project, to help protect the threatened species, and opened the Running W Restaurant featuring locally farmed meat.

RECENTLY AWARDED THE Outstanding ASEAN Women Entrepreneurs Award for 2019, Tirawan Pangsrivongse Taechaubol’s success has only increased each year after rising to the role of group project development manager of Cape & Kantary Hotels. Along with involvement in countless other properties, this philanthropic businesswoman is the force behind Thailand’s Cape Kudu Hotel in Koh Yao Noi and Cape Fahn Hotel on the private island of Koh Fahn, Koh Samui, both members of Small Luxury Hotels of the World. Tirawan’s exquisite style graces each of the 55 luxury suites at the boho-chic Cape Kudu Hotel as well as the 22 independent luxury villas that comprise Cape Fahn Hotel. “I feel very fortunate to have been born in Thailand, which is one of the least sexist countries in the world,” Tirawan says. “That means that I have had the opportunity to exercise what I might call ‘the woman’s touch’ without any fear of criticism or censure from colleagues or the public.”

JOSEPH A. HARDY III originally set out to purchase a small parcel of fishing land for his daughter, Maggie, an avid fisherwoman, when he attended a land auction in 1987. Instead, he came home with 550 acres of land that would soon become the Nemacolin Woodlands Resort in Farmington, Pennsylvania. The resort grew to epic proportions under Hardy’s leadership, but it wasn’t until his daughter, Maggie Hardy Knox, took over as president and owner in 2002 that the property truly began to shine. Under her leadership, Nemacolin expanded to 2,000 acres, including an acclaimed spa and a holistic wellness center, a PGA Tour-quality golf course, a private airfield, a wildlife academy, an Olympic-caliber gym and five distinct lodging options, including the famous Frank Lloyd Wright-inspired Falling Rock luxury boutique hotel.

BEATRICE TOLLMAN WAS TRAINING to be a nursery school teacher when she met and fell in love with her husband, Stanley Tollman, a second-generation hotelier. “We leased our first hotel, The Nugget Hotel in Johannesburg, using our wedding present money to furnish the property,” she explains. “I managed the kitchen, teaching myself how to cook through reading, trialing and tasting, while Stanley looked after the front of house.” The couple’s passion for excellence in both food and service set their property apart, and soon the Tollmans had a portfolio of 20 hotels under their brand, The Red Carnation Hotel Collection. Aside from running the company, Mrs. Tollman continues to hand-select the finest antiques, artworks and furnishings for each property, including the luxurious Ashford Castle in Ireland. “Thankfully, I do think that the industry has come on enormously in terms of opportunities for women since my first days in hospitality,” Mrs. Tollman says. “When I started out running the kitchen in our first hotel in Johannesburg, we would have to pretend that the chef had gone home whenever a diner wished to pass on their compliments in person, as it was so unusual for an establishment to have a woman in the kitchen. Thankfully, women are now thriving as chefs and in the myriad other roles throughout the hospitality sector.”