FIRST, LET’S GET OUR BEARINGS: Ribera del Duero signifies a Spanish Denominación de Origen from the north of the country in the Castile and León region. The DO is generally located in the provinces of Burgos, Valladolid, Segovia and Soria, and is one of several wine-producing regions along the Duero River.

A bit of the region’s winemaking background: The DO was established in 1982, and its wines currently enjoy heightened popularity, thanks in part to the growth of wine tourism in Spain. The geological makeup of the area consists of tertiary sediments, limestone, marl and chalky concretion. The Duero Valley undulates, and the moderate to low rainfall and extreme climate conditions (it snowed during my late March visit) define the taste of the local wines, almost exclusively reds, particularly Tempranillo. The only white grown in the region derives from the Albillo grape.

To truly kick back, begin your visit and your wine immersion at the 5-star Hotel Abadia Retuerta LeDomaine, including a winery, hotel and spa. Housed in an ancient abbey transformed into the epitome of luxury, guests here enjoy butler service, among other first-rate amenities.

True indulgence is found in Santuario Wellness & Spa. The water ritual, which includes a Finnish sauna, steam bath, experience shower, hydrotherapy pool and an indoor heated pool, utilizes specially treated water. LeDomaine uses water from its own well, 395 feet below ground, which is extracted, decalcified and transferred to a reverse osmosis system, creating a quality likened to natural mineral water.

Another unique characteristic is the Spa Sommelier. Combining the concepts of Traditional Chinese Medicine with aromatherapy, the appropriate treatments for each spa-goer are determined through a tasting. After guests smell several oils and taste wines from the Abadia Retuerta Winery, the Spa Sommelier analyzes their preferences to customize the treatments that best meet each patron’s wellness needs. I trusted in the process, and the oils I selected were utilized in my Le Grand Cru treatment, a wrap and massage duo.

I also completely surrendered during my Life Infusion Ritual facial, hands down the best I’ve ever had, using Natura Bissé skincare products. Before each treatment, you select a gemstone based on which color appeals to you at that moment. Its complimentary color is also given to you and the meaning behind each is explained. You can choose to hold both or place them next to you during the treatment, further balancing your energies. Between the Spa Sommelier and the stones, spa-goers allow the needs of their bodies and minds to select the wellness journey for them. 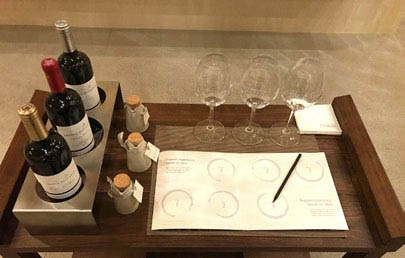 The spa is only the beginning of the experience at Abadia Retuerta LeDomaine. There’s also Michelin dining, a personal trainer, exercise classes including yoga and Pilates, a winery and wine tasting, bike riding, falconry and more.

Foster & Partners’ architectural wonder of Portia Bodegas, in Burgos, is rivaled only by the wines produced there. Opened in 2010 to combine the ancient art of winemaking with avantgarde oenology, the barrel room felt more like a modern art gallery, with pink lights showcasing the large-scale masterpieces lining the walls. The art changes regularly, and an on-site gastrobar offers tastings.

To continue your wine education, visit the Provincial Wine Museum, one of the most visited in Castile and León, and housed in the Peñafiel Castle, dating back to the 10th century. The museum, opened in 1999, examines the culture of wine, its history and production techniques. Stunning, panoramic views of the town of Peñafiel also delight visitors to the castle. 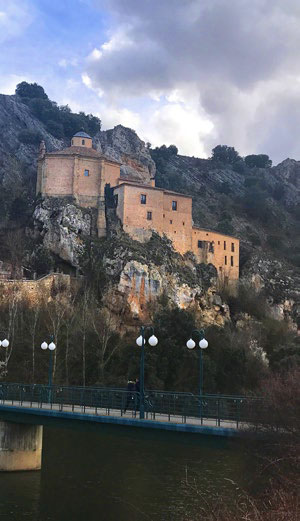 In addition to Peñafiel, spend time in the many towns, cities and villages throughout the region and the DO, including Covarrubias, designated the nicest little town in Castile and León; Soria for its natural beauty; the historic center of Valladolid; and Lerma, a historic and artistic site. That’s only the beginning of what this northern Spain region offers any type of traveler, as it also includes more popular tourist cities including Salamanca and Segovia, both World Heritage sites, and León with its Spanish Romanesque architecture.

This traveler kicked back with good wine, which goes hand in hand with good food. Nothing makes food and wine taste sweeter than understanding their origins, cultivations and beginnings. I not only embraced viticulture, I also embarked on a truffle hunting expedition with Viveros Tuber, a truffle plantation owned by two brothers maintaining a long-time family business. Group tours and private experiences are available.

I watched as the dogs — better for hunting truffles than pigs as they are less interested in eating what they find and more interested in the treat they’ll earn for finding the prized food — unearthed the ground’s treasures. I soon sat down to a Michelin-starred lunch where the Soria truffle was the star, appearing in each course from the appetizer to dessert.

Later, as the wine swirled in my glass and the earthy aroma of the truffle emanated from the dish in front of me, I was reminded to savor these cherished moments in these special places. That’s a sentiment to which we can all raise a full-bodied glass of Ribera del Duero Tempranillo!

The closest international airport is Madrid-Barajas Airport. The drive to Valladolid takes approximately 2.5 hours. Valladolid is connected to other provinces by highways. Regular bus and train service from Madrid is available to provinces throughout the region.

Where to Stay in Ribera del Duero

CASTILLA TERMAL MONASTERIO DE VALBUENA HOTEL & SPA In the heart of the DO, this 5-star hotel is located in a wellpreserved Cistercian monastery from the 12th century and boasts the first spa with five stars in Castile and León. Calle Murallas, S/N, 47359 San Bernardo $$$$

PARADOR DE LERMA Housed in the ducal palace at Lerma, this 4-star parador features a central location and an elegant interior boasting lighting and décor from the Hapsburg era. Rooms range from doubles to suites and a duplex. Plaza Mayor 1, 09430 Lerma, Burgos $$$