EVERYTHING OLD IS NEW AGAIN. The idiom rings especially true in Warsaw, where 80–90 percent of the city was destroyed by the time Nazi soldiers fled. Only a smattering of buildings in the Praga neighborhood remained, one location where Władysław Szpilman, whose story was popularized by The Pianist, lived in hiding. The façades of weathered, block-shaped apartment buildings still display bullet holes, and rusted metal doors guard the entryways. The neighborhood appears locked in that horrific decade save a few gentrifying restaurants and bars like Zakład Mięsny, a relatively recent rehab project serving up Polish craft beers.

Old Town, on the other hand, exudes a sense of grandeur as you approach Warsaw Castle, anchoring the spacious, pedestrian-only Castle Square. This leads to narrow side streets lined with charming, colorful buildings stacked neatly together. Lime green, beige, brown, white, orange — hardly the stereotypical image of cold Central Europe, it feels like walking in a painting.

You’d be forgiven for that sentiment, as the reconstruction of Stare Miasto (Old Town) was based largely on the work of Italian urban landscape painter and printmaker Bernardo Bellotto. Bellotto was celebrated in the 18th century for his stunning work recreating grand European cities such as Dresden, Vienna and Warsaw, where he spent the last days of his life. Between 1770 and 1780, Bellotto created 26 vedute (large-scale depictions of cityscapes) of Warsaw for the Panorama Room at the Royal Castle. These works proved essential references for rebuilding Warsaw to its former glory, though it was impossible to recreate every nook and cranny.

Poland, now a decade-plus in the European Union, is experiencing a rush of tourists and business travelers from all over the continent and beyond who flock to Warsaw’s reconstructed center for selfies and sightseeing. Generally missing are everyday Varsovians. Nonetheless, Old Town rose from the ashes of fascism and should be celebrated.

You’ll have no problem finding a hotel here. An obvious suggestion is the Hotel Bellotto, named after the artist. The original 16th-century building was destroyed in 1939, but the Swedes, Saxons, Vlachs and Cossacks all had their turn at ransacking the place centuries prior. The rebuilt 5-star property features 20 guestrooms that positively spoil you.

You’ll find a solid option for a power breakfast or business coffee nearby at Shabby Chic Coffee & Wine Bar, just a five-minute walk from the hotel. Select from breakfast styles including Polish and French; or if you’ve started your morning with a snack at the hotel, come back for a business lunch. Another nearby local favorite is the Viennese-style Café Bristol. Enjoy the high ceilings and round tables while you discuss your business. Like Shabby Chic, a Polish breakfast with free-range scrambled eggs, sausage and local Koryciński cheese is available. Or try the Fit Breakfast with homemade granola cereals, sunflower and pumpkin seeds, honey, cranberries and goji berries.

For a business lunch or dinner, Restaurant Literatka offers fine dining along the Krakowskie Przedmieście. The Royal Castle sits in the foreground as you sample an elegant take on Polish cuisine with a dash of international flavors. 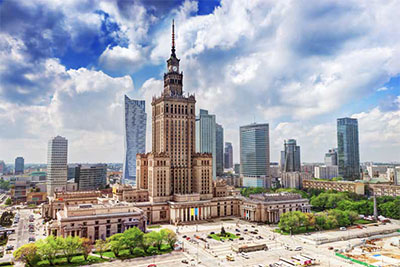 You’ll find familiar hotel brands like ibis, Radisson and Westin closer to the main train station, Warszawa Centralna, across from the Palace of Culture and Science — a commanding testament to the Art Deco architecture left over from the communist period. These properties offer a convenient location for getting to and from convention centers such as PGE Narodowy (National Stadium), Expo XXI and MT Polska, where most conference business takes place.

Warsaw is increasingly an international city, with English widely spoken as a second language. Business etiquette is similar to elsewhere in Europe and the Western world, though like its Germanic neighbors, Poland leans toward direct speak. However, Varsovians are just as likely to acclimate to American business customs.

If you arrive at Warsaw Chopin International Airport, rail offers the most convenient option to the city center via the S2 or S3 lines. Public transport is prevalent; trams and buses conveniently crisscross the city, and the Veturilo bike share system provides a fantastic means for experiencing the fresh, wide bike lanes when weather cooperates.

For a truly local experience and memorable visit, you can’t beat Autor Rooms. This artist-run property dwells in a limbo between Airbnb and hotel, with its location in an apartment building in the Śródmieście Południowe neighborhood. Local artists designed the property and its rooms, and it offers an experience most visitors to Warsaw never have. Best of all, you’re surrounded by some of the most popular local eateries.

Grab a casual lunch just up the street at Tel Aviv Food & Wine, dinner at La Sirena: The Mexican Food Cartel for some of the best Mexican in Europe, and enjoy a nightcap at Kraken Rum Bar or one of the PiwPaw’s that serve Polish craft beer. Experience Warsaw’s communist legacy at a milk bar (bar mleczny). Originating here in 1896, milk bars played a key role after World War II when Poland was a satellite state of the Soviet Union and most residents struggled to feed their families. The government propped up milk bars in the 1960s to offer cheap meals.

As the name hints, most meals consisted of dairy-based foods, especially when meat was rationed. Most milk bars disappeared following the collapse of communism, but they’ve made a nostalgic comeback. Locals claim the food improved compared to the original incarnations, with most preferring these home-cooked meals over fast-food restaurants. Join the elderly, students and working class of Warsaw for a €2–3 meal at Bambino, Rusalka or Milk Bar Prasowy.

Almost every capital city boasts a reputable art museum, so focus your cultural intake on what makes Warsaw unique. The impressive Warsaw Uprising Museum depicts the fall of Warsaw to the Nazis, life under occupation, attempts by the local Jewish community and Polish nationals to fight back, and the city’s razing as the Soviets liberated the city. To lighten the mood, head to The Fryderyk Chopin Museum, celebrating the legendary 19th-century composer — the perfect cap to your business trip before heading to the airport named in his honor.