Venture Deep Into the Remote Wilds of the Amazon

A city of 2 million people sinks into the river. Less than an hour earlier we were stuck there in heavy traffic. We finally arrived at the riverside, where the three-decked wooden boat Tucano awaited. We transferred to it and cast off, heading upstream. The near bank became dense with greenery. Pairs of scarlet macaws flapped over us. Insects and birds and howler monkeys provided a natural soundtrack above the rhythmic throb of the engine. Manaus disappeared in our wake.

This was everything we imagined of the Amazon, though in fact we had set off slightly upstream from that great river. We were on the Rio Negro — the Black River. Decaying vegetation stains the water with tannins, giving it the look of black tea. The Amazon itself is silty and resembles milky coffee. The two join at Manaus, Brazil, and flow side by side for several miles before blending.

With a maximum of 18 guests, Tucano is modest by Amazonian standards. (The Iberostar Grand Amazon, for instance, carries 148; and 2,000-passenger cruise ships voyage the 1,000 miles upstream from the Atlantic Ocean to Manaus.) In contrast to its larger, modern rivals, Tucano sports the wood-paneled ambience of the late 19th century, when this style of boat was favored by Brazil’s rubber barons, among the richest people on the planet.

This felt like a different era in more ways than one. As the city receded, WiFi and cellphone coverage dropped away. For much of the next week, we were out of reach of the 21st century. Whenever we made guided excursions on foot into the rain forest, even the boat was left behind, and we experienced the Amazon in its raw, primordial glory.

One thing we quickly discovered beyond the hermetic cocoon of the Tucano was a rain forest is not the most comfortable of places. It was humid and stinky and full of creatures — some large, some microscopic — that bite or sting. We soon resigned ourselves to having our skin increasingly covered with itchy insect bites.

It could have been worse. On our initial forest trek, the guide rushed to grab my sleeve, stopping me mid-step. If my foot had reached the ground, it would have landed on a fer-de-lance, South America’s most dangerous snake. It lay coiled and camouflaged in the leaf litter, ready to strike in defense. We took photos, then skirted safely around it and resumed our trek. From then on, I let the guide lead the way.

The Amazon rain forest is full of wildlife, but the nature of the habitat means encounters are usually fleeting. You hear a noise or see a flick of movement within the thick vegetation but rarely more than that. 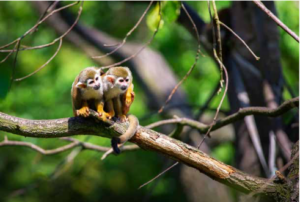 Monkeys proved an exception. Time and again during our week-long trip we attracted the curiosity of howler monkeys, squirrel monkeys, monk sakis and tiny tamarins. They bounced from branch to branch above us on the trails or tracked the progress of the boat from the river- side canopy. Periodically we’d spot what appeared to be a mildewed bundle of rags high in the trees and recognized a sloth.

Even in the river we saw abundant life. We often spied the eyes and snouts of caimans (relatives of alligators) drifting in the shallows, and on one memorable occasion, pink river dolphins accompanied the boat for a time.

We also had the opportunity to grapple with one of the world’s most feared fish. One afternoon we cast fishing lines baited with meat into the water. Before long we were hauling out red-bellied piranhas. The guides were on hand to unhook them, skillfully avoiding razor-sharp teeth that can bite through metal. We ate some of our catch for dinner.

For much of the voyage we were the only boat on any given stretch of the river. That began to change when we returned downstream. The traffic increased, and we saw boats loaded with families as well as motor yachts, ferries and water taxis.

The skyline of Manaus rose out of the water ahead of us, and then our dormant cellphones started to ping with seven days of missed messages. Good as it was to be back among the familiar trappings of modern life, there had been something revitalizing about our time in the rain forest. And we couldn’t help viewing with alarm the logging barges heading downstream, carrying the forest away tree by tree.

INFO TO GO
Domestic and international flights arrive at Eduardo Gomes International Airport, 9 miles north of downtown Manaus. Transfers to major hotels are available by shared bus or by taxi.