OVER THE COURSE of my career, I have played more than a few rounds at Trump National Golf Club, Los Angeles. The team there has always been helpful securing tee times for travelers like myself, coming in for an extended business stay. I must give a shout out to Lili Amini, general manager, and Joey Lewis, PGA head golf professional, who have been helpful whenever I play.

I have a client who recalls a shot where the head of my 7 iron snapped off and sailed into a deep ravine, destined to be part of the course forever. He reminds me every time we play.

Another fond memory was when I was invited as a guest of American Airlines for a Tee It Up with Tiger golf outing, which took place when Tiger Woods was nursing a stress fracture in his leg. He did walk with us on Hole 11, a par 3, and made a comment about my tee shot, “Hey, that looks like a pretty good shot!”

I recently attended a Chase Inside Access event where Hank Haney, famed Tiger Woods swing coach, gave each player a mini lesson (Global Traveler August 2016). Hanks’ book, The Big Miss, is worth a read to get Tiger’s backstory.

Trump National started as Ocean Trails, known as the course that lost its 18th hole to the Pacific Ocean in 1999, weeks before it was to open. The culprit was a cracked drainage pipe that leaked and caused the entire hole to slough off into the sea. After trying to make a go of it, the previous owner put the course in receivership. Guess who came in to buy the course for a song? The Trump Organization. Working the art of the deal, Trump negotiated the buy and the insurance to cover the repairs. I guess it is important to read those pesky insurance policies.

Part of the makeover, in which Donald Trump was hands-on, included adding several waterfalls, sand bunkering and other enhancements. Fast forward to 2015, and Trump was no longer pleased with the waterfalls. Some say the California drought might have played a role as well. Frankly, I never liked the waterfalls, as they made some of the holes more gimmicky than challenging and they looked too artificial. As the Grand Slam of golf was about to be played at the course, Trump felt the timing was right for the changes. The good news: They are gone, and along with some other positive changes, Trump National Golf Club, Los Angeles is great again.

I teed up for a game with E Bae Kim and Bill Noonan from Asiana Airlines and Vladimir Velasco, formerly with Malaysia Airlines.

HOLE 1 | 358 yards, par 3
I always thought this hole was a painful start. You hit from an elevated tee box to the fairway below. With the alterations, the waterfall behind the green was removed and 30 yards were added to the left to offer a bailout landing area. It’s a real risk-reward situation. The green was raised slightly, so your approach shot is blind unless you are on the left side. In addition, the fairway was raised, changing the whole dynamic. With the higher green, you need to have better control stopping the ball, which was a problem in the past and still is today. We had great drives from all, including E Bae who hit a beauty, but we all had issues with the dreaded second shot. Vlad performed best, scoring a bogey.

HOLE 9 | 509 yards, par 4
Nine is the No. 1-ranked handicapped hole on the course, and much of this has to do with the length and the sloping of the fairway from right to left. This slope can pull you into the fairway bunker on the left (the largest on the course at 120 yards) on your drive or roll you into the water later as you gain yardage to the green. It’s a par 4 best played as a par 5 for most weekend golfers, like the members of our team. The three-tiered green is fronted by the aforementioned lake, which makes scoring challenging. Bill was trying to play a “head game” with me, but I turned this around by securing par.

HOLE 17 | 240 yards, par 3
Check out the renovations made to the championship tees on this hole — it makes for an impossible par 3 for mere mortals!

This is another post-waterfall hole that otherwise stayed consistent with the exception of a great deal of bunker work to bring the hole back into shape. From the tee box you have a lovely view of the white, sandy bunkers and the huge American flag that stands beyond the green at the clubhouse. I took an overly aggressive swing and ended up way left on the bramble but findable. It took me two more shots to the green and a two putt while Vlad and E Bae secured a safer landing area to the right and in front for a couple of Texas wedges to the cup and one putt for par.

HOLE 18 | 512 yards, par 4
This is a great finish hole with magnificent views of the Pacific Ocean and the cliffs below, which once swallowed up some of the course. As we teed off, the weather was starting to cool down a bit, and we were searching for the jackets we did not think we would need that day. Rancho Palos Verdes can run 10 degrees cooler than Los Angeles, and the marine layer can be thick in the mornings. It can be quite beautiful to see this fog over the topography of the region: On a clear day, you can see Catalina Island and, if you are lucky, whales trekking the waters below. 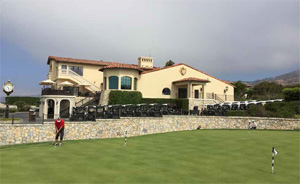 The fairway is two-tiered and whether you land on the lower or the upper tier will change the way you play this hole. The lower will be more difficult, causing you to play directly off the many bunkers that dot the approach and guard the green. I counted seven on the left alone. From the upper tier you have the opportunity to go for the green with a throat opening from the fairway. There are still bunkers, but they come less into play with four on the right. One of us always cuts the left side too closely and lands in the enormous bunker on the left side, which must be just a little smaller than the bunker on Hole 9. This time I was that person. This made for a nearly impossible shot to the green, which I took, rather than bailing out right. I hit one of those bunkers on the left; this ruined my chance for par. The rest of the team also struggled. From all the times I’ve played this course over the years, I have fond memories of some clients climbing like billy goats on the right side of the hole to find wayward balls.

Opening up the course also offered more landing areas for bailouts and better views of the ocean. The clubhouse staff does an excellent job with meals and drinks, and the pro shop makes the experience of buying a pleasure.