Until the end of 2019, The Tokyo Metropolitan Government, Tokyo 2020 Organizing Committee, the International Olympic Committee and the International Paralympic Committee collaborated to ensure the Tokyo 2020 Olympic and Paralympic Games would be greater than the sum of its events, athletes, teams and ancillary events. “The Reconstruction Games” became a prevailing theme, with numerous competitive soccer, baseball and softball events planned in Iwate, Miyagi and Fukushima, all affected by the 2011 Tōhoku earthquake and tsunami.

And then COVID-19 forced rescheduling of these best-laid plans and, ultimately, all international travel. Nevertheless, once the new dates for the Olympic Games ( July 23–Aug. 8, 2021) and Paralympic Games (Aug. 24–Sept. 5, 2021) were set, the Tokyo Organizing Committee of the Olympic and Paralympic Games announced in its updated media materials that the revamped Games would rise up as an embodiment of the human spirit that would transcend athletics.

Furthermore, tickets, tourism dollars and media coverage would still raise awareness and funds for the cities’ continued rebuilding. “Recovery from the earthquake remains one of the important themes for Tokyo 2020,” affirmed a spokesperson from the Tokyo Organizing Committee. “In order to support the reconstruction of the disaster-hit areas, we will leverage the power of sport to generate hope and put smiles on the faces of children living in those areas. Another aim is to re-introduce the nature, cuisine, history, tradition and culture of the disaster-hit areas to the world, and show our gratitude to [those who provided] support during their recovery.”

Although a late January article appearing in The New York Times and other news outlets reported on consideration of a possible second cancellation amid some Japanese officials connected with the games, IOC president Thomas Bach and others swiftly pushed back, saying the show would go on, with safety modifications implemented accordingly. According to Reuters, the IOC was working in conjunction with the World Health Organization to help arrange for vaccines for more than 11,000 athletes. Taro Kono, the newly installed head of Japan’s inoculation push, meanwhile, announced vaccination of Japan’s 126 million citizens would begin in late February.

“In order to ensure the safety and security of the spectators and others, as with preparations for the Games themselves, discussions are being held at a series of meetings attended by representatives of the Government of Japan, the Tokyo Metropolitan Government and Tokyo 2020,” assured the Games’ spokesperson. “We are also discussing COVID-19 infection prevention measures, including the implementation of physical distancing at venues, with individual local municipalities.”

Optimistic ticket holders can also gain valuable insight from St. Louis-bred and Kyoto-based Japan expert/travel planner Robert Schrader. He observed several practices were already in place to slow the spread, including widespread signage about wearing masks, local police tasked to politely encourage citizens to stay home except when necessary, and regular spraying of the subways and other public areas with an antivirus solution between 1and5a.m.

COVID or otherwise, Schrader advised visitors should adopt practices in place in Japan and other Asian countries for years. “Doing what the locals have long done out of habit to stay healthy, such as wearing masks at all times, is a good guideline to follow,” he said. “As there’s an unspoken pressure in Japanese culture to blend in, especially in densely populated places, wearing masks at all times and paying attention to other things they are doing may not only help you stay safe but also be a good guest in the host country.” 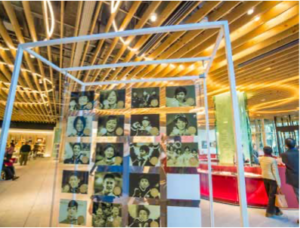 Permanent exhibits at the Japan Olympic Museum provide more fascinating insight, showing how past Games planners had to be as flexible as they were creative. One small corner of the museum is dedicated to the merchandise and story behind the Tokyo Olympics of 1940 — “the games that never were” — following Japan’s entry into World War II. A more prominent space is dedicated to the triumphant 1964 Tokyo Olympics, representing Japan’s rebirth and renewal in the years following the war. Other displays reflect the successes of the 1972 Sapporo and 1998 Nagano Winter Games.

It is also interesting to note the museum’s September 2019 opening took place just weeks before the worldwide unveiling of the Japan National Stadium, a few blocks away. Architect Kengo Kuma’s design was introduced to the world as a grand but relevant representation of the future of the Games. It was also an Olympian achievement in its own right, considering his concept came from behind to win the day architecturally. In the wake of costs and complications in bringing Zaha Hadid’s original 2012 stadium proposal to fruition, Kuma’s environmentally friendly, functional design was embraced in late 2015 and went into production at the start of 2016.

Japan National Stadium, site for the opening and closing ceremonies, thoughtfully incorporates hardwood from most of Japan’s prefectures, forestry-inspired colored seating and design features that use natural lighting and air flow (mitigating the need for air-conditioning) to curb energy costs when in use. In the spirit of the repurposing part of the environmental equation, murals and other architectural elements from the original National Stadium — the hub for the 1964 Tokyo Olympics — were worked into the Heritage Zone.

In December 2019 architects and construction teams put the finishing touches on the Olympic/Paralympic Village complex at the Harumi/Tokyo Bay waterfront to house 18,000 athletes and personnel during the Olympic Games and 8,000 during the Paralympic Games. Architects leading that tour explained the LEED-certified development would be immediately repurposed after the Games as a residential and shopping area with winning views of the city.

The “village,” meanwhile, spreads exponentially when you consider there are 42 venues, including 10 in the Heritage Zone. With the watershed impact of COVID-19, stringent guidelines will be in place for the villagers — athletes, officials, judges, media, VIPs and broadcasters. In early February, the IOC, IPC and Tokyo 2020 began releasing a series of “Playbooks” that outline the personal responsibilities key stakeholders must adopt to ensure safe and successful Olympic and Paralympic Games this summer. The first in the series is aimed at international federations and technical officials, to be followed by editions for the athletes, media and broadcasters. The first versions will be updated with more detail as the global situation relating to COVID-19 becomes clearer ahead of the Games.

IOC member and Australian Olympic Committee president John Coates announced close to press time that vaccines and rapid testing would be a part of the daily routine. He encouraged official attendees to not only follow these and their countries’ recommended safety measures but also avoid overstaying in the Olympic Village and sightseeing. In his press appearances, IOC president Bach urged national Olympic committees to take the lead in modifying their athletes’ and support staff travel plans. To minimize the risk of infections, athletes competing in earlier events would arrive a few days early to prepare and then leave after their events so athletes competing later could be rotated in.

Schrader added Japanese news agency Kyodo News reported on installation of automated entry point temperature scanning devices (barring entry if an elevated temperature is detected), opening “fever centers” for foreigners (similar in structure to medical centers used by Japanese citizens) and even having spectator-free Games if the situation warranted it.

“What ultimately happens may not [be known] until the last moment,” Schrader said. “However, I can safely predict that in order to travel to Japan and other countries moving forward, purchasing a travel insurance policy will become a mandatory or at least an essential practice rather than an optional one. There’s a possibility Japan’s government and other countries will require visitors to have a policy that includes COVID coverage as a prerequisite for entering.”

The IOC still recommends purchasing tickets or packages through authorized ticket sellers in the United Sates, including CoSport and JetSet Sports. Tickets for the opening ceremony range $220–2,680, while ticket prices for events run $60–1,160. While the hottest tickets (such as swimming and gymnastics) were reportedly sold out, there were still tickets available at press time for basketball, boxing, volleyball and track and field events for as little as $44.

Most tickets purchased last year will be honored in 2021. In cases where events are moved to smaller venues (causing seats to be unavailable) or ticket holders are unable to attend, refunds will be issued through the authorized ticket sellers where they were originally purchased. Planned “Live Sites” (large TV screens broadcasting events in real time at many historic places, listed on tokyo2020.org) were still in place, promising to bring a democratization to the Olympics experience for Japanese citizens and foreign visitors. Schrader said that, based on his experience, capacity limits could be updated based on the COVID situation of the moment. 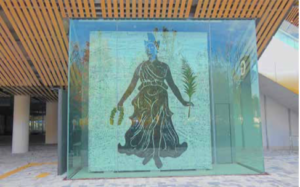 “In the wake of the Games’ postponement, we are planning to review the ‘Live Site’ venues and simplify their event content to facilitate COVID-19 countermeasures,” said the Games organizing committee spokesperson. “We’re making every effort toward holding a safe and secure Games, ensuring they are forever remembered as a symbol of unity and solidarity … evidence we are stronger together in the battle to overcome this unprecedented crisis.”

• Make a budget to determine how much cash you need per day for food and other essentials, as some smaller restaurants and shops do not accept credit cards.

• Purchase a PASMO or SUICA transportation card, which you can reload with money, from station vending machines. Both cards work for subway and bus lines in Tokyo and other cities in Japan.

• Thanks to Japan’s ultra- efficient, comprehensive network of railways, you can stage your base camp in one of Tokyo’s outlying regions, where hotel options are somewhat more plentiful.

• As July and August are Tokyo’s warmest months, pack accordingly. Bring fans, empty water bottles and sports towels from home, or make a shopping list to purchase necessities when you arrive.