Like the frenetic kitchen of a sold-out Korean restaurant, Seoul is hot, sizzling, a 24/7 mass of energy. Yet few travelers have the bustling South Korean capital of 25 million people at the top of their bucket list of destinations.

Seoul may not possess the panache of Paris, the royal history of London or the flair of New York City. What it does offer is thousands of years of history, mega-shopping for the latest fashions, a vibrant food scene particular to Korean customs and tastes, five palaces, pageantry, casinos, clubs and exciting attractions to please business visitors or entice families. Add to this a favorable exchange rate ($1 equals 1,103 won) and lots of English-speaking young people you won’t find in most other Asian countries.

When you’ve settled in your hotel (there’s one to fit every budget) and rested from the major time change, you’ll find subways and taxis provide the best way to see the city. Purchase a T-money card for the subway and enjoy the good maps and English signage at most stops. Taxi drivers rarely speak English but can translate using smartphones (keep the business cards provided by your hotel). Taxis are reasonable, clean and abundant. Unless you read or speak Korean, the bus system will prove an unnecessary challenge.

The Han River divides Seoul into two major sections: north (Gangbuk) and south (Gangnam). The northerly, older section houses many tourist sites while the south, the new Seoul, is more affluent and the place to be seen with the latest fashions and technology.

Each section further divides into many distinct neighborhoods. You’ll most likely navigate to a destination by finding these neighborhoods, such as the popular tourist area of Insa-dong or the palace area of Gyeongbokgung. Shopping exists in almost every neighborhood, with many retailers specializing in crafts, high fashion, sports clothing and electronics. You’ll find only two actual enclosed malls, with multiple levels and international brands. 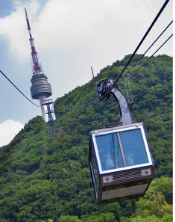 Get your bearings with a visit to the N Seoul Tower, the highest point in the city. Take a cable car and then a fast elevator to the top for a 360-degree view of the city. At sunset you get a different view on a Han River cruise, no advance reservations necessary.

After cruising the city, drop into one of the many “meat houses,” where you cook your own entrée over a flaming grill built into the middle of each table while you socialize with other guests. Servers bring a host of side items to accompany your freshly grilled meats. It’s all for fun, and you may make some new Korean friends during the evening.

For those interested, a daytrip to the DMZ border with North Korea can prove either fascinating or scary. One million troops stand guard on the most heavily fortified border in the world. Either full-day or half-day tours are available, including travel time, and may not be ideal for all family groups, although many do make the trip. Visitors witness awesome military pageantry and get a glimpse of what it means to live in a divided country.

You can spend almost a full day in Korea’s premier museum, the National, the sixth- largest in the world. Its three floors display thousands of artifacts, archaeological objects, an entire floor of fine arts featuring more than 800 works and yet another strictly for Asian art.

Few visitors to Seoul pass up a visit to the royal palace complex of Gyeongbokgung, an easy subway ride from almost any hotel. Situated in the heart of the city, it includes a performing arts center, throne room, meditation pond and more historic buildings, including the National Folk Museum.

As you’ll be doing a lot of walking in the city and crossing the river several times a day, take a break at one of the Han River’s bridge cafés. Relax and order a cool iced drink or green tea and plan your next stop while the city buzzes around you, always in high gear.

For visitors who want a hands-on Korean experience, a visit to Korea House near Myeondong offers a cultural arts experience as well as a restaurant. With demonstrations on making kimchi, hanji (paper craft) and traditional dance, each class lasts about two hours. In the evening some of Korea’s top performers take over with traditional dance and music performances, with English subtitles.

After dinner, head to Itaewon to experience a mix of Seoul’s nightlife. Here a combination of tourists, U.S. military, businesspeople and local Korean students and lovers come to see and be seen. On weekends, hot clubs like Soap Seoul have folks spilling out of the front doors and into the street. For LGBTQ+ visitors, the most popular bars, dance clubs and karaoke bars may be found in both Itaewon and Jongno. The fun continues in the Hongdae (university) neighborhood, where students gather to dance and sing in private karaoke rooms.

In this Korean city, there’s always more action just around the corner.

Samcheonggak
Travel up the hill to the presidential Blue House for a Korean take on international fine dining, at half the cost of Europe or New York, in beautiful rooms with a view. Choose the continental fixed menu.
3 Daesagwan-ro, Seongbuk-gu
$$$$

Because of the worldwide reach of the South Korean business network, the city’s Incheon Airport is a model of efficiency and design. Carriers offer direct flights and connections to most of the world’s capitals and beyond. Service to and from other Asian countries is frequent and convenient. Some routes within Asia utilize Gimpo (GMP), a second Seoul airport. The big three U.S. carriers offer service with several non-stops. Once on the ground, passage through customs and immigration is quick and efficient. Reach the city center in less than an hour by rail, express airport bus or taxi. Remember, you need not tip in Korea. You can exchange currency for the local won at ATMs in banks and some retail spots. Major international credit cards are widely accepted. For the best weather, visit in the fall or spring.