The Radio Hotel is, literally, a colorful new building, its presence strengthening an already vibrant neighborhood. Each of the 221 rooms features wall-to-wall windows, offering a variety of urban views. The hotel’s inviting entrance opens its doors to an oasis of public space, including an outdoor courtyard, and the rooftop event space is an additional unique amenity. 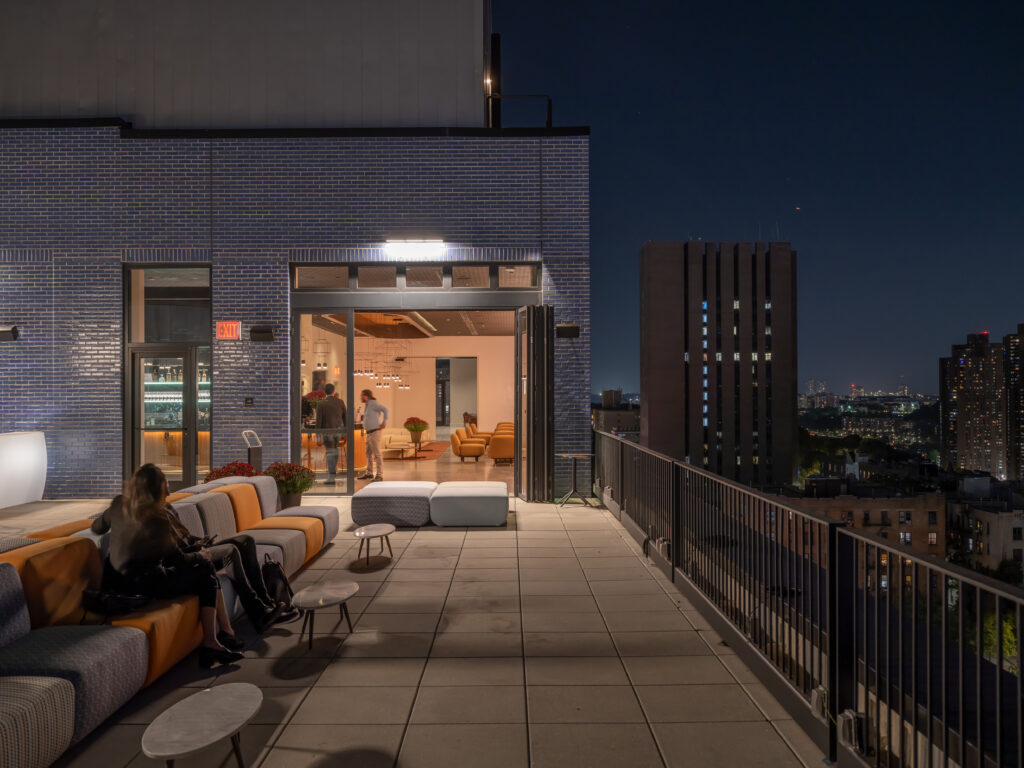 Designed by MVRDV Architects for developer Youngwoo & Associates, with Stonehill Taylor as the architect of record, the design approach creates a vertical village so the building does not overwhelm the surroundings, as is so often the case when an individual building is larger than the neighboring buildings. The stacked, block-shape of the structure has the added benefit of providing multiple outdoor terraces, with every “block” having its own outdoor space on the roof of the block below.

The building’s bright color is a nod to this part of the city, referencing the colorful shopfronts of the neighborhood. The brightest colors of green, yellow, blue, red and orange, are found on the upper blocks, while more muted colors, like plum, teal and grey-brown, greet visitors at street level. 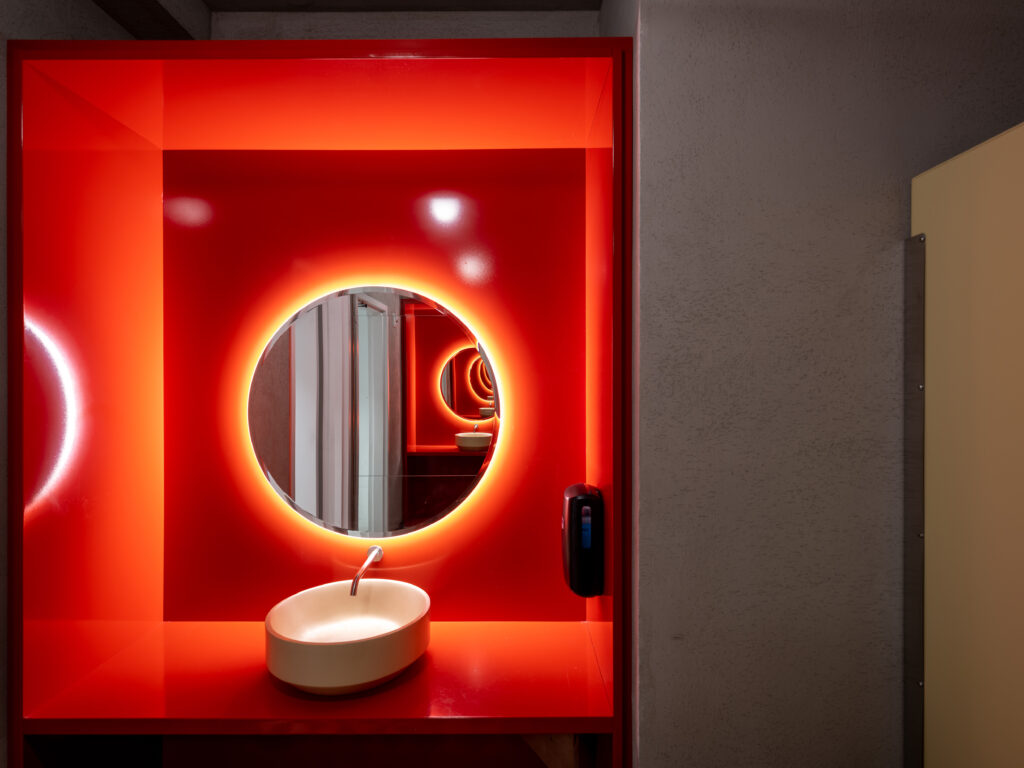 “Washington Heights has a unique and exciting character, very different from the other Manhattan neighborhoods further south,” said Winy Maas, founding partner, MVRDV. “The design of Radio Hotel and Tower is inspired by that character; we took the smaller blocks that are typical in the neighborhood and stacked them into a vertical village. Add to that the bright colors that you see all around the area, and the project is like a beacon celebrating this part of the city.”

Inside, the 221-room Radio Hotel serves as an important hub for those traveling for conferences hosted by Yeshiva University and New York Presbyterian Hospital, both located nearby. The hotel’s interior design by Workshop APD takes the exterior as its inspiration, matching the brightly colored bathrooms to the colors of the blocks. In addition, the building includes ground-level retail and more than 172,000 square feet of office space. On the 12th floor, in the blue block, is Above The Heights, a dedicated event space suitable for every type of event, from weddings and class reunions to bar mitzvahs and quinceañeras, with the adjacent rooftop terrace boasting spectacular views of Manhattan. 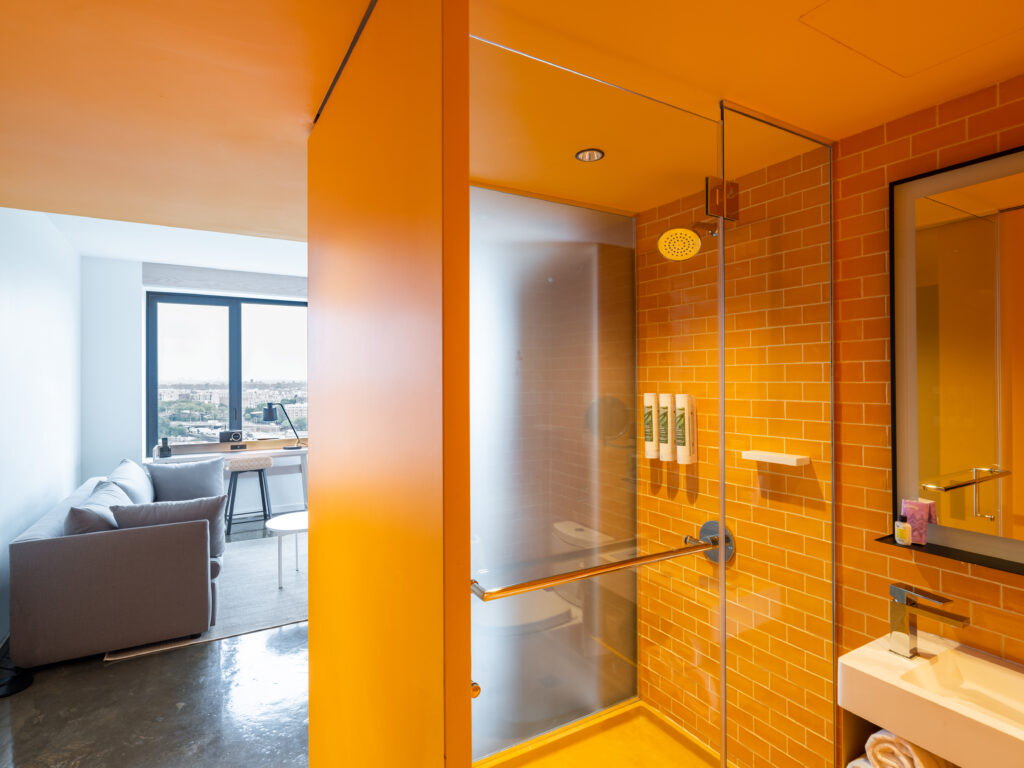 “We put $300 million dollars into developing Radio Hotel and Tower, for that investment we could have easily constructed a building in downtown Manhattan,” said Margarette Lee, partner, Youngwoo & Associates. “We chose this location because we believe in the neighborhood, and we have a chance here to have an impact. Seventy percent of the employees at the hotel and restaurant are from the neighborhood; our presence here will result in a significant economic input to the community.”

The building also hosts a range of facilities for food and entertainment, including Jalao NYC, which celebrates the neighborhood’s local Dominican culture. The first U.S. outpost of the popular Santo Domingo restaurant, Jalao NYC, was created by a collaboration between Richard Sandoval Hospitality and Jalao founder, Antonio Espaillat. Just beyond the restaurant at ground level, the hotel also features an 8,000-square-foot courtyard with a garden and ample outdoor seating, creating a hub of live music and activity for the hotel.

Bringing a jolt of electric energy to an often-overlooked part of Manhattan, Radio Hotel and Tower addresses Washington Heights’ pressing lack of hotel rooms. It celebrates the area’s community, furthering the urban qualities of the surroundings without departing from the already-existing urban character. And, of course, it creates a landmark bringing attention to the neighborhood. Already, this new addition has attracted praise and interest, with Time Out New York writing “suddenly everyone is itching for a staycation way, way uptown.”  Room rates at Radio Hotel for mid-December start at $151 for double occupancy.