Mardis Gras season is typically celebrated in February and March. While the date fluctuates by year, there are numerous events throughout the city leading up to Mardi Gras Day, also known as Fat Tuesday. This year, Fat Tuesday falls on March 1 and the city celebrates with parades in the weeks leading up to the holiday. Known as krewes, the popular groups leading parades include Krewe de Vieux, Krewe of Muses and Krewe of Endymion. Check out the full listing of parades on the website. 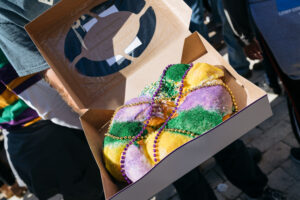 A visit to New Orleans isn’t complete without experiencing the city’s culinary scene. Two food fests to check out during March are the Top Taco and Hogs for a Cause festivals. Top Taco boasts unlimited tacos and tequila. Hogs for a Cause is a barbecue cook-off, with proceeds going to fight pediatric brain cancer.

Check out the calendar for more events happening in February, March and beyond.

Windstar Cruises canceled its scheduled cruises in Asia for the fall of 2022 as uncertainty remains in regards to ports reopening in the region. The cancellation affects seven scheduled Windstar Cruises itineraries on Star Breeze. Other itineraries affected include a crossing of the Pacific from Alaska to Japan, two Grand Japan sailings; Island Hopping through Japan; Windstar Crew Hometowns: Philippines and Indonesia; Hidden Indonesia & the Great Barrier Reef; and Edge of the Outback.

As a mom, you’re not allowed to pick favorites. With a growing baby in my belly and a toddler guiding my daily routines, my own favorites often take a back seat as I make the daily choice to swap healthy foods for junk food cravings and toddler tunes for windows-down, volume-up jams. But when I heard my favorite spa was relaunching its facial program, I felt zero guilt — of the mom variety or otherwise — about taking a morning off and booking myself a nice, long, rejuvenating facial at The Spa at Four Seasons Philadelphia at Comcast Center.