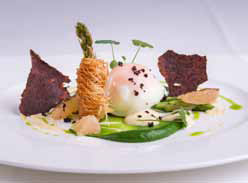 Both twins brought their culinary skills to sea, joining Queen Elizabeth 2 in September 1999. Mark worked his way to chef de cuisine, managing all six galleys and serving on board for seven years before becoming executive chef of Cunard’s flagship Queen Mary 2. Nicholas also worked through the ranks before joining the opening team for Queen Victoria, becoming executive chef. Now as a resident on Queen Mary 2, he’s served as executive chef aboard all three Cunard ships.

Today they enjoy vacationing at their home in Kissimee, Fla., relaxing by the pool and, of course, dining out to discover new culinary innovations and concepts.

WHAT THREE GO-TO INGREDIENTS ARE ALWAYS IN YOUR HOME KITCHEN?
Nicholas Oldroyd: The finest Belgian chocolates, strawberries and coffee
Mark Oldroyd: Chai tea, ice cream (it must be Häagen-Dazs) and chicken

WHAT’S YOUR FAVORITE SEASON FOR COOKING, AND WHY?
NO: Winter, because I love the festivities and traditions: the smell of mulled wine, Christmas midnight markets, roasting chestnuts, Christmas pudding with brandy sauce, wine, fattened roast turkey, pigs in blankets, roast goose and homemade game pie with all the artisan-style trimmings that go with a festive feast. And, last but not least, lots of Champagne and being with close friends and family.
MO: My favorite season is summer because food is at its best when it is kept simple and light but bursting with flavor. I have many memories of picking fresh strawberries in Yorkshire. The aroma and flavor are so natural, smelling wild notes of garlic in the woods of Dalby Forest. I also love meeting friends for barbecues — tasty grilled food cooked over the smoky charcoal and enhanced with aromatics, spices and rubs. Berry coolers and pool parties, summer is a season where families come together for a great time.

ASIDE FROM YOUR CURRENT POSITION, WHAT’S THE BEST JOB YOU’VE EVER HAD?
NO: One of my best jobs was when I was appointed the opening executive chef for Her Majesty the Queen. I met her in person, and my photo was in the tabloids. Being a twin, the newspaper had my name wrong and put Mark’s name by mistake.
MO: For a few years, I worked for Nestlé in York. I was in my element and felt like Willy Wonka. I love chocolate and the aroma married with notes of caramel, mint, praline and vanilla. However, the best decision I ever made was to work at sea. Queen Elizabeth 2 was the first ship I joined as a demi chef de partie. I loved traveling the world, working with different nationalities and, of course, tasting authentic cuisine from around the world. It has been a priceless experience, which I still enjoy.

WHAT’S THE FIRST MEAL YOU EVER COOKED?
NO: If I can remember that far back, it would have been with Mum at Malton Golf Club in North Yorkshire, and I believe it was Yorkshire pudding.
MO: The first meal I cooked was a roast beef Sunday lunch. It was memorable because my father likes everything well done. The beef was like shoe leather. The best thing was that he really enjoyed it, and he said, “That’s the way I like it!” As they say, the customer is always right. I still make the best Yorkshire pudding — it’s better than Nick’s!