NASHVILLE: IT’S A TRAVEL DESTINATION known widely for its country music scene (it is Music City, after all) and, at least over the last decade, as a bachelorette party destination. However, step away from the bright lights and twangy tunes of Broadway, aka Honky Tonk Row, and you’ll find there’s much more to the Athens of the South than immediately meets the eye.

The offerings for female travelers are particularly impressive, and 2020 is an especially fitting time for women to make their way to Nashville. This year the city celebrates the 100th anniversary of the national ratification of the 19th Amendment, which granted women the right to vote in 1920. While this monumental scene on the tapestry of American history is worth celebrating all over the country, Nashville and Tennessee as a whole boast a special connection to the event. Tennessee was the final state to ratify the amendment, and the deciding vote was cast in Nashville. As such, many Nashville organizations and businesses will present events, exhibits and activities throughout 2020 in honor of the female right to vote.

Beyond simply exploring some of the city’s honorary offerings, from free and self-guided suffrage walking tours to the year-long suffrage centennial exhibit at the Tennessee State Museum, visiting women can enjoy a more comprehensive experience with a stay at the luxurious Hermitage Hotel during 2020. The hotel notably served as a central meeting spot for pro- and anti-suffrage campaigners, and this year guests can explore the hotel’s collection of artifacts from the summer of 1920 in the lobby. They can also enjoy suffrage-themed craft cocktails at Oak Bar and a suffrage tea series through the summer, among other experiences.

The state and city’s support of strong-willed and groundbreaking females on that fateful day in 1920 wasn’t an isolated incident, though. Nashville has proven to harbor fertile soil for female entrepreneurs. 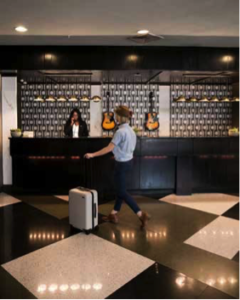 “We’ve had a [surge] of restaurants owned by women here in Nashville over the past 10 years, and it’s been very exciting to see,” says Marie Echols, general manager, Hotel Preston in Nashville.

Deana Ivey, chief marketing officer, Nashville Convention and Visitors Corp., notes the shopping scene in Nashville has really benefited from the addition of unique, independent boutiques, most of which, if not all, are female-owned. Ivey credits Nashville’s overall creative culture as an impetus for the growth in female business culture over the last several years. “Nashville is really known for being supportive of creatives and working [with them] and building them up. Whether someone is in music or a chef or a maker, it’s a really tight-knit community. [The community aspect] makes a big difference.”

Many of these business owners and entrepreneurs find homes in up-and-coming neighborhoods and areas where construction rapidly provides new storefronts. Lisa Bush, director of sales and marketing at the 3-year-old Thompson Nashville, points to the Gulch neighborhood, the luxury boutique hotel’s location, as evidence of this. “The Gulch has unique, mom-and-pop shops that are very different [from what you’ll see downtown]. The Gulch area has more shopping and restaurants, and it’s a little bit more upscale.”

The Thompson Nashville frequently hosts solo female business travelers, and many, if not in the area long, remain in the Gulch neighborhood and explore its plentiful female-owned shops and restaurants. These include e.Allen, a designer boutique, and Bar Otaku, a casual Japanese pub. If they do have some additional time, they might branch out to the 12South neighborhood, a destination known for its walkability and highlighted by local designers and makers. Soon these travelers will have an additional area to explore with the development of Nashville Yards, a project called a new “gateway to downtown” that includes retail, green space, a concert venue and a Grand Hyatt property.

Wherever female travelers explore all Nashville has to offer, though, the general consensus among businesswomen who live and work in Nashville seems to be that female travelers can feel safe exploring on their own in just about any part of town.

“Nashville is a very safe city for women. You can feel comfortable walking any time of day, whether you’re alone or with a group,” commented Echols, noting that as a female hotel general manager, one of her top priorities is the safety of her guests at all times.

Bush seconds Echols’ comment in relation to The Gulch. “As a female, you can walk around and feel safe and find things to do without spending money for an Uber. Here [in the Gulch], I would [feel safe] any time of day or night.”

From shopping to dining, history to hotels, it’s easy to see how women of all ages and travel purposes are both catered to and celebrated in Nashville.

The focus on female entrepreneurship continues when you drive from Nashville to nearby Franklin. This small community features an adorable, walkable downtown with plenty of boutique shopping and local eateries. Scenic views also abound when you travel a portion of the Natchez Trace Parkway, which passes by Franklin on its way to Natchez, Mississippi. The 444-mile U.S. National Park Service-protected recreational road touches approximately 10,000 years of history.

For a scenic drive with a fun destination, take The Jack Trail, a Tennessee Scenic Trail stretching from Nashville to Lynchburg, home to Jack Daniel’s Distillery. Leave room for stops along the way, as the trail takes you past historic and natural attractions across central Tennessee.

For an enjoyable drive that highlights more history than nature, take the Antebellum Trail. As you leave Nashville, the trail takes you to the gorgeous Belle Meade Plantation, which could provide a day-long stop on its own. Further exploration of the trail’s 80-mile loop, though, reveals dozens of historic sites, including the James K. Polk home and Andrew Jackson’s Hermitage.