SMACK DAB IN THE MIDDLE of the Mediterranean Sea, almost equidistant from mainland Europe and North Africa, lies the tiny island nation of Malta. Its confluence of cultures has weathered the storms of several occupations, but it now serves as a gateway between continents and a well-preserved museum of some of the world’s oldest civilizations.

Comprising three islands (Malta, Comino and Gozo), the archipelago’s rugged coastlines and sparkling sapphire waters make it a desirable destination for both work and play. From the growing capital city of Valletta to the stunning rocky shores that once housed the world-famous Azure Window, Malta is rife with opportunities to expand and explore.

Founded in the 16th century by the Knights of St. John, the former walled city of Valletta now serves as Malta’s capital. Functioning for the past few centuries as a hub for economic trade between North Africa, the Middle East and Europe, Valletta became a UNESCO World Heritage site in 1980 and the European Capital of Culture in 2018. Due to its central location, Malta has seen a surge in international visitors who arrive for both business and pleasure. While often based in Valletta, business travelers can easily explore other areas of the island as well as the neighboring islands by public bus, rental car or private driver.

Most trips to Malta begin in Valletta, a small but historic and invigorating Mediterranean capital. One of the best and more relaxing ways to see the city is to book a ticket on a day cruise. Most tours depart almost every hour and cruise around the coastal capital and its various harbors. Afterward, stay on the southeastern border of Valletta to spend time strolling through the pristine and manicured Upper and Lower Barrakka Gardens, the Upper offering panoramic views of the Three Cities across the harbor and beyond. In Valletta proper, head to Merchant Street Market to sample local food from one of the restaurant stalls while perusing both local and international brands of clothing, décor and souvenirs. 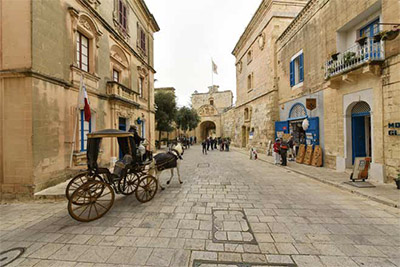 A street in Mdina © SJANKAUSKAS – DREAMSTIME.COM

After the Knights of St. John arrived and settled on the island of Malta, they commissioned their namesake church in the 16th century. Still open today, St. John’s Co-Cathedral welcomes visitors to marvel at its majestic Baroque interior that contains Caravaggio’s oldest signed work of art.

There’s a lot more to Malta than just Valletta, and each corner of the island and smaller sister islands feels like worlds away within just a few hundred miles.

As an island, Malta boasts opportunities for watersports like diving and boating. Book your spot on a fishing boat with a local for a few hours of searching for the best day’s catch to deliver to local restaurants, or just kick back on a catamaran as you curve around the coasts and stop for swimming breaks in the crystal-clear Mediterranean waters. Novice divers can take lessons at various points around the island, while experts can embark on challenging dives like Lantern Point, with depths of nearly 500 feet. Underwater reefs and caves combine with calm, clear waters to make Malta a desirable destination for deep dives.

Back up on land, Malta’s Marsa Sports Club is the island’s largest locale for leisure activities like golf, miniature golf, tennis, squash, cricket or just some sunbathing and swimming by the pool. The 100-year-old sports club offers daily and weekly rates for visitors.

The quaint fishing village of Marsaxlokk warrants a daytrip from Valletta, particularly on Sundays when the street market bustles. But if crowds aren’t your thing, visit on a weekday and make a point of dining at one of the harbor-front seafood restaurants, where fish is practically tossed directly from one of the bay’s colorful fishing boats into the kitchen each day. Walk or take a taxi east along the coast until you reach St. Peter’s Pool, a natural pool with suitable cliffs for jumping into the cool waters below. 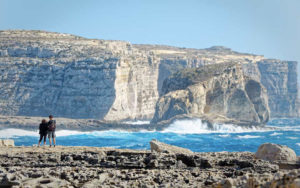 Step back in time with a visit to Mdina, which served as the island’s capital until medieval times. From atop the city’s walls views spread across the Maltese archipelago, while down at sea level the car-free zone has earned the nickname “the Silent City.” An easy bus connection links well-preserved and welcoming Mdina to Valletta and other places around the island.

Nestled between Malta and Gozo, the tiny island of Comino often would be overlooked if not for the Blue Lagoon, a stunning blue paradise for swimming, snorkeling, fish-spotting and diving, as well as speedboat tours of the adjacent caves.

A short ferry ride brings you to the island of Gozo, the slightly greener sister of the three islands. The ruins of Gozo’s Ggantija Temple predate the Egyptian pyramids, and the seaside town of Xlendi is known for its captivating cliffs. The former home of the Azure Window still attracts visitors to the bucolic capital city of Victoria, where an uphill climb to the Citadel offers scenic views of rolling hills and the farms that produce Gozo’s fruity liqueurs.

Just as cultures coalesce on the tiny Mediterranean island of Malta, so do chances for fun and exotic activities when work duties are behind you.

Malta International Airport lies approximately five miles (15 minutes by car) southwest of the capital city of Valletta and serves all of Malta. Public transportation is still quite limited in Malta, but visitors can access the rest of the island by public bus, taxi or private transfer. Car rentals are also available, but drivers should be warned Maltese roads can be difficult to navigate due to the uneven pavement, assertive drivers and the fact that the Maltese drive on the left side of the road.

Four express bus lines (X1, X2, X3 and X4) connect the airport with various locations around the island and serve as the cheapest way to get you to your destinations. Taxis also run between the airport and nearly anywhere in Malta, with rates varying from about $17 to Valletta to $25 and $30 to St. John’s Bay and St. Julian’s, respectively. Shuttle service is available for select hotels located throughout Malta and can be arranged on the Malta Airport website.

Where to Stay in Malta

AX THE PALACE Just north of Valletta on the peninsula of Sliema sits AX The Palace Hotel, a chic hotel and spa with a rooftop terrace, pool and dining area with views of the Mediterranean Sea. High Street, Sliema $$$

CORINTHIA PALACE HOTEL & SPA “Malta’s Leading Hotel,” according to the World Travel Awards, is still in operation while getting a facelift. This fall its revamped Athenaeum Spa will reopen. De Paule Avenue, San Anton $$$

The Hotel AMERON Zurich Bellerive au Lac, forged from the collaborative efforts of interior design firm Monoplan AG and other cutting-edge design firms, bills itself as a celebration of the 1920s and ‘30s aesthetic. The story behind it is compelling as the building dates to 1928 and has connections with the early days of Switzerland's movie industry. However, there are several fun Mid-Century Modern and late 20th-century design touches in the public and private areas. Clearly, it's going for the "modern luxury" vibe Millennial and Gen-X business and leisure travelers look for when seeking a quality smaller property with a great location.