IN NEW YORK CITY, one of its grande dame hotels quite arguably reached a new pinnacle.

The revered New York Palace, more aptly known as The Palace, made its opulent debut during the 1980s when the “Queen of Mean,” Leona Helmsley, opened the 55-story tower atop a city heritage landmark in Midtown Manhattan.

Over the years, a coterie of celebrity guests, wealthy tycoons and the most powerful world leaders imbibed inside the storied palace bedecked in gold finishes, handcarved ceilings, polished marble floors and a grand staircase worthy of a Hollywood movie set. The King of Pop, Michael Jackson, was a known regular. “His jacket was inspired by the bellmen at The Palace,” says David Shenman, director of sales and marketing, Lotte New York Palace, recalling MJ’s star-studded epaulette uniform.

In 2015 LOTTE Hotels & Resorts, a Korean company part of the conglomerate The Lotte Group, acquired the 909-room luxury property on Madison Avenue for a reported $805 million, transforming the hotel into the Lotte New York Palace (pronounced Loh-tey). A further $140 million redesign put the hotel back on the map, giving it a facelift.

The Lotte Group, established in 1948, is the fifth-largest business group in South Korea. The consortium consists of more than 60 business enterprises, among them duty-free shops, food and beverage and retail, with a crop of hotels under its Hotels and Resorts division.

Shenman adds, “Lotte purchased this hotel to show 10 million New Yorkers and 60 million visitors what Lotte stands for,” describing the brand new to America but extremely well-known in Korea. 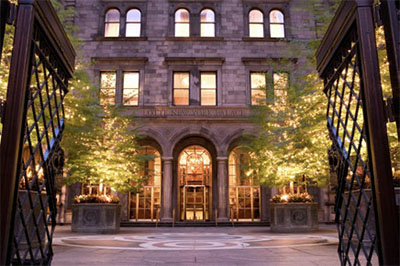 General manager Becky Hubbard once told Leaders Magazine, “Our new ownership came in with a lot of love for this hotel from the start, and they wanted us to excel. We could not have asked for better owners because, while they are a huge conglomerate in Korea, hotels are the face of their company.”

Korea’s largest hotel group has 19 properties in Korea and 10 additional properties stretching from the United States to Southeast Asia and Russia. The name “Lotte” derives from Charlotte, the heroine of Goethe’s masterpiece The Sorrows of Young Werther. According to the company, the Lotte Group aspires to create dreams to fill the world with love, liberty and life. “As a global group leading Asia, Lotte is committed to offer guests a more abundant life and a beautiful future,” reports a Lotte release.

The Lotte New York Palace places the accent on creating experiences and offering bespoke service with an attentive staff, many of whom hail back to the days of Leona Helmsley. “We have many employees celebrating their 30 years,” Shenman comments on the company loyalty.

The hotel car service chauffeurs guests within a roughly 20-block range via the Maybach, the highest-level Mercedes money can buy. During the nightly Palace Hour, the glistening, marbled lobby lounge welcomes guests for nibbles and other notable surprises — which could be show tickets to Radio City Music Hall located across the street.

The hotel delivers on local experiences. “We became the official hotel of the U.S. president in New York City under the Obama administration,” says Shenman. The Palace was chosen in 2015 as a favored hotel for government leaders and staff during the annual U.N. General Assembly meeting.

In addition, the Lotte New York Palace partnered with iconic establishments such as the New York Yankees, Radio City Music Hall and the Rockettes for special events and themed hotel packages. The Palace offers other perks on an ongoing basis. On Monday and Tuesday nights the lobby lounge features free live jazz while, on the weekends, sold-out magic shows from New York’s famous magician Steve Cohen tantalize audiences in the Madison Room.

“We try to do things that are only Palace experiences,” adds Shenman, listing other popular seasonal programming such as Mother’s Day and Christmas events to “create memories.”

Barbados might have Rihanna. Toronto might have Drake. But this past spring, the Lotte Group snagged the K-Pop boy band VIXX as the ambassador for Lotte Hotels, due to its global popularity and image. K-Pop ambassadors aren’t a new phenomenon for the Korean hotel heavyweight, either. In 2015 the Lotte Group partnered with South Korean megastar Rain (aka Jung Ji-Hoon) as the face of the company (see him on promotional materials wielding glasses of Champagne or Cabernet Sauvignon). Boyfriend, another South Korean boy band, also was named that same year as the official promotional ambassador for Lotte Hotel Busan, attending events and representing the hotel.

Meanwhile, back at The Palace, while you won’t see a K-Pop band ambassador anytime soon, as Shenman summarizes, “We try and create magic here at The Palace.” 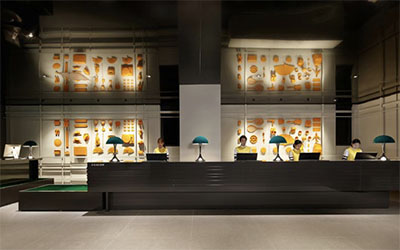 L7 HOTELS
Demographic: For the selfie crowd and the bold and beautiful who don’t mind Instagramming their experiences; a DIY coin laundry is available for style-conscious guests.
Offerings: This is where comfort and high-tech meet. These hotels currently reside in Korea with three locations.
Highlight: Big Gangnam-style appeal is the allure at the L7 Gangnam. Located in the K-Pop bustling district of race cars and bling, the floating bar says it all. Sit in the pergola by the crackling fire pit and enjoy a foot spa while sipping on Champagne as a celebrity DJ brings down the house.

LOTTE CITY HOTELS
Demographic: Ideally designed for business travelers, Lotte City Hotels provides the essentials for today’s corporate clients and prides itself on quality service and easy access for everyone.
Offerings: Currently the majority of these properties are located in Korea, with seven hotels in cities like Ulsan, Jeju and Seoul. The other city hotel is in Uzbekistan.
Highlight: The Lotte City Hotel Tashkent Palace in Uzbekistan revives the Old World Uzbekistani splendor in this classic castle setting. Deemed as Uzbekistan’s cultural heritage site with museums and shops nearby.

LOTTE HOTELS
Demographic: Mostly situated in Southeast Asia and Asia with one property in the United States; designed for luxury corporate and leisure guests.
Offerings: The hotels focus on prestigious landmark properties in the most luxurious locations in Korea, the United States, Russia, Vietnam and Myanmar.
Highlight: Sleeping in The Towers at the fabled hallmark Lotte New York Palace with the best drone shot view of St. Patrick’s Cathedral. By night, Manhattan’s skyline shines on the illuminated Rockefeller Center. 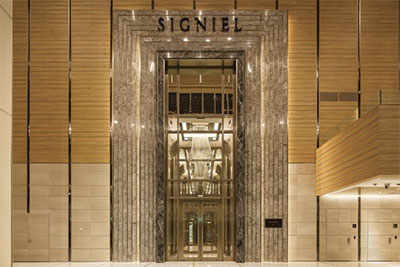 SIGNIEL
Demographic: The ultimate world-class establishment for luxury-seeking guests who aim for the finest bespoke experiences.
Offerings: Only one property; the 235-room SIGNIEL Seoul opened to huge fanfare in 2017, making it easily the signature brand of Lotte Hotels & Resorts.
Highlight: Think 7-star hotel quality. Super-posh amenities from the flow of Champagne in the lounge to the specialty welcome tea from the fine tea purveyor Osulloc and majestic views of the Han River and the entire city of Seoul. Did we mention helicopter transfers, Michelin-starred chefs and the country’s most expensive hotel room at $18,000 a night?