Escape to the South Pacific with Paul Gauguin Cruises

WHEN PARIS STOCKBROKER and would-be painter Paul Gauguin struck out for Tahiti and the South Pacific in 1891, it marked an escape from the confines of civilization. Once he made that leap, Gauguin produced masterpieces on canvas that captured the essence of a tropical paradise. Today, cruise passengers can enter that same magical world aboard the aptly named m/s Paul Gauguin, immersing themselves in the exotic cultures and landscapes that have mesmerized art lovers for more than a century.

The m/s Paul Gauguin is at one with the translucent lagoons and sharply etched, verdant archipelagoes of the region. If Paul Gauguin’s first residence was a humble bamboo hut, modern escapists now have a choice of swank staterooms on Paul Gauguin Cruises’ boutique vessel, specially designed and outfitted for South Pacific cruising. The ship is intimate (just 332 passengers) and generously staffed (217 crew). There’s a twin focus on Polynesian culture (with expert speakers, special guests and indigenous performers) and on water sports (with scuba diving, snorkeling and a retractable platform for kayaking, paddle boarding and windsurfing). The Gauguin is one of the few ships in the world to offer onboard scuba certification and a resident dive team. Full fare covers round-trip air travel from Los Angeles, all shipboard gratuities, a full range of complimentary beverages, 24-hour in-cabin dining, world-class meals and access to a private beach on Bora Bora and a private island near Tahiti. 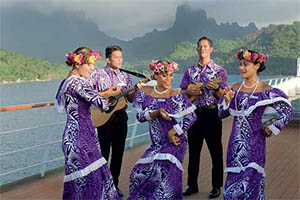 One of Paul Gauguin Cruises’ best introductions to this remote domain is its 12-night Fiji, Tonga, Cook & Society Islands cruise, which we booked in June. The Gauguin proved a surprisingly spacious small ship, truly of luxury class, offering a pool, casino, spa, fitness center, theater and internet center, along with three fine open-seating restaurants and gourmet menus devised by noted Paris chef Jean-Pierre Vigato. In addition to magicians, a classical musician and a range of experts, we were entertained and informed by seven resident Polynesian performers and craft instructors. A special guest was renowned ocean environmentalist Jean-Michel Cousteau, who talked about his family’s pioneering undersea explorations, illustrated with rare films and videos.

Our itinerary spanned four island nations: Fiji, Tonga, the Cook Islands and finally French Polynesia, home to stunning Bora Bora, Moorea and Tahiti. It was a formidable navigation through many cultures and ports, consuming more than 2,000 nautical miles. Perhaps the most breathtaking landings were the final few, which included a morning snorkeling with stingrays and lemon sharks in the waters of Bora Bora, a circle tour of mountainous Moorea and a complete day of leisure on Motu Mahana, the Gauguin’s tiny private islet in the Cook Islands. Here the sun chairs, barbecue and floating bar awaited our arrival, and kayaks and snorkeling gear were always close at hand.

For travelers seeking to follow Paul Gauguin’s escape route, this cruise through a seabound paradise is nothing short of extraordinary — carefree yet scintillating, mysterious yet deeply familiar, a voyage through a South Pacific Shangri-La of white sands and diaphanous waters startled back to life as our ship shifted from culture to culture, isle to isle and beach to beach.