IT IS SAID OUR NATION’S CAPITAL city reinvents itself every four years, which may be an unsettling scenario for some visitors. It’s music to the ears of MICE planners, however, who look forward to the many new restaurants, hotels, off-site meeting venues and the ever-changing social and political climate so reflective of Washington, D.C., one of the country’s most dynamic cities.

The Walter E. Washington Convention Center is the city’s main MICE venue for large conventions and exhibitions. The building offers 2.3 million square feet and can handle 500 to 42,000 attendees. One of the most energy-efficient buildings in the nation for its size, the Convention Center provides 77 breakout rooms and the largest ballroom in the region. The 1,175-room Marriott Marquis Washington, DC, the only property with direct access to the Convention Center via an underground concourse, features an additional 105,000 square feet of event space.

CityCenterDC will be a 10-acre, mixed-use luxury downtown development when fully completed later this year, but about 30 upscale shops and restaurants are already open for business. The $250 million, 360-room Herzog & de Meurondesigned Conrad Washington, DC Hotel, a five-minute walk from the Convention Center, opens in February.

In downtown D.C.’s Mount Vernon Square, a $122.5 million mega-complex is being erected across from the Convention Center. The mixed-use development incorporates 15 historic buildings and is expected to open early this year. Another project opening near the Convention Center this year, Columbia Place, a 480,000-square-foot project, features a dual-brand hotel (357-room Courtyard by Marriott and 147-room Residence Inn) and a 203-unit apartment complex. 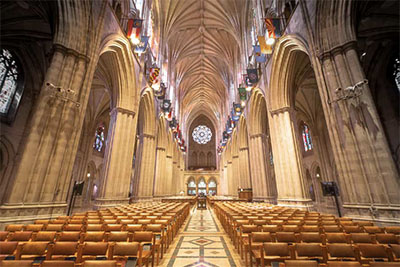 The Wharf district opened just two years ago, transforming the city’s Southwest Waterfront. It features four rentable public piers and a new performance venue, The Anthem, with flexible capacity for 2,000–6,000 persons. New hotels in this district include the 278-room InterContinental Washington D.C. – The Wharf with 17,000 square feet of meeting space and the Caribbean-style Kith/Kin restaurant. The 175-room Canopy by Hilton offers a 10th-floor rooftop lounge and a large outdoor terrace, while Hyatt House, with 237 rooms, provides indoor/outdoor meeting space.

The 317-room W Washington D.C. hotel, a 1917 Beaux Arts building across from The White House, embarked on a $50 million top-to-bottom renovation expected to be complete by this spring. In addition to all guestrooms, the renovations include the hotel’s modern rooftop bar and a new lobby design to include a waterfall and a seemingly endless mirror honoring the Lincoln Memorial’s Reflecting Pool.

For planners interested in D.C.’s culinary draw, the metropolitan area finally has a Michelin 3-starred restaurant. In the 2019 edition of Michelin’s guide to Washington, D.C., Chef Patrick O’Connell’s Inn at Little Washington became the first Michelin 3-starred restaurant in the D.C. area. Although located 68 miles away (in Washington, Virginia), the 19th-century property offers private dinner, reception and meeting options for 30–90 persons.

Fortunately, D.C. offers many other fine-dining restaurants, several with at least one Michelin star, including the 2-starred Pineapple and Pearls and José Andrés’ Minibar; and 1-starred venues like Bresca; Masseria; Métier, offering a seven-course tasting menu; and Komi, serving a “leisurely” 12-course tasting menu. Other properties of interest to planners include Capitol Hill’s Spanish-themed tapas bar Joselito Casa de Comidas and Wharf district newcomer Kaliwa with its Southeast Asian fare.

D.C.’s first SLS-branded property, the 175-room SLS Hotel Washington, is expected to open in 2020 with 10,000 square feet of meeting and ballroom space in the city’s Mount Vernon Triangle neighborhood. As another sign of the city’s hotel boom, its first Virgin Hotels property will feature 178 rooms, a panoramic rooftop lounge with an infinity pool, and multiple meeting and event spaces when it opens in the fast-growing Union Market district in 2021.

Officina, the tri-level culinary playground Nicholas Stefanelli opened at the Wharf last fall, is already a buzz-worthy leisure and corporate venue. D.C. architecture firm Grupo used blue tiling, wood accents, soft lighting and black-and-white flooring across the space. The Mercato is a replica of an Italian market; the first-floor Café offers Italian snacks and a gelato bar; the à la carte Trattoria Stefanelli’s, focusing on casual southern Italian food, includes a 12-seat private dining room overlooking the water; and Terraza, with its year-round alfresco rooftop and 70 seats, also offers an adjacent 64-seat private event space with prime waterfront views. Private events represent a big part of the operation, and the whole venue can be bought out to accommodate 500-plus guests.
officinadc.com

The REACH at the John F. Kennedy Center is a new venue being created at this noted performing arts center. It will add 2,500 square feet of new performance space; 7,500 square feet of pre-function and event space with new art installations; and a terrace for up to 1,600 — all opening Sept. 7.
cms.kennedy-center.org/thereach/about

The Smithsonian National Postal Museum in the heart of Capitol Hill is perfect for all types of events, from galas and seated dinners to cocktail receptions. Its 90-foot-high Atrium features three vintage airmail planes suspended above the space, while the historic Beaux Arts lobby features a rosette ceiling and elegant marble floors and columns. postalmuseum.si.edu The Washington National Cathedral, with its stunning interior, hosts events in its Bethlehem Chapel, the nave and the Pilgrim Observation Gallery, offering panoramic views of the skyline. The National Law Enforcement Museum, a new building opened last October in Judiciary Square, features interactive exhibits and 21,000 artifacts and provides private event space.
cathedral.org
lawenforcementmuseum.org