Demand for Premium Economy Continues to Climb as Travel Rebounds

Premium economy continued to grow in popularity over the past few years, with many airlines hopping on board to add this new cabin to their offerings or to update existing premium economy cabins. Its main draws include extra legroom and reclining space, amenities and services, all at a more affordable price compared to business or first class. 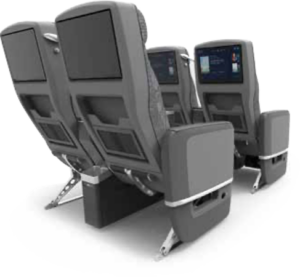 Delta Air Lines expands its Premium Selection Cabin to U.S. destinations this winter, starting with Hawai’i. Before, Passengers could only fly Delta’s Premium Selection on trans-Atlantic or trans-Pacific flights. Now, Delta Premium Select will appear on three daily non-stop routes to Hawai’i by the end of this year: Atlanta (ATL) to Maui (OGG), New York (JFK) to Honolulu (HNL) and Salt Lake City (SLC) to Maui. Looking ahead, Delta plans to add more enhancements to its Premium Select cabin, including an elevated dining experience and new amenity kits filled with travel essentials.

Air France recently introduced its latest recliner-type seat model in the premium economy cabin. The new seat offers 38 inches of legroom along with redesigned seat cushions made of soft, navy blue herringbone fabric and a wider seat back that can recline to 124 degrees. Passengers in premium economy also enjoy new noise-reducing audio headsets integrated into the seat. 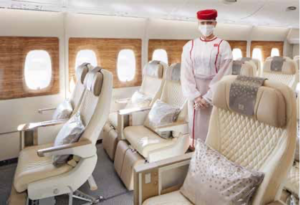 Emirates officially launched its new premium economy cabin this year, with plans to invest more than $2 billion in 120 of its aircraft. New features in Emirates’ premium economy cabin include leather seats with wood paneling, a welcome drink and hot towel for passengers upon boarding, and a separate menu and dishes served on chinaware with stainless-steel cutlery. Seats include more legroom and more width for extra comfort. The seats also come with calf rests, footrests and a six-way adjustable headrest, as well as a cocktail table for drinks if guests don’t want to put their entire tray table down.

The elegant seats provide extra privacy and comfort, with a barrier to shield each seat from each other and across the aisle. Built into a hard shell, the seats allow passengers to recline without invading the space of the person behind. The new seats also come with a bigger screen, individual reading lights and leg rests.

Slated to debut on flights between Amsterdam and South Africa in 2023, KLM Royal Dutch Airlines introduces its new Premium Comfort Class, situated between economy and World Business Class. The new seats, designed by Collins Aerospace and specialists at KLM, allow passengers to recline farther than in economy-class seats as well as provide more legroom, a footrest and a larger screen.

As of late last year, All Nippon Airways enhanced its premium economy cabin with new seats made by Safran on all of its Boeing 787-9 Dreamliner aircraft. The updates also include an expanded cabin with 28 premium-class seats, 10 more than it had previously. With specially customized designs, the new seats provide additional privacy with a vertical separator, as well as a swivel tray table and small cocktail table at the front of the center divider. The premium economy cabin also features 15.6-inch monitors for a better entertainment experience.

Like Lufthansa and Air New Zealand, Swiss International Air Lines’ new premium economy cabin includes ZIMprivacy seats, allowing for extra privacy and comfort. All of its Boeing 777-300ERs feature this new cabin, and the airline plans to add the new cabin to its Airbus A340s in the near future. Meals are served on real chinaware plates with metal cutlery, and passengers enjoy amenities like an eye mask, earplugs, toothbrush and toothpaste.

Virgin Atlantic’s recent unveiling of its newest aircraft type, the Airbus A330-900neo, means a revamping of all cabins, including premium economy. Simply called Premium aboard Virgin Atlantic, this cabin sits directly behind the Upper Class cabin and comes with a leg rest, extra leg space, deep recline and in-seat wireless charging. Seats in Premium also include a touchscreen with Bluetooth. 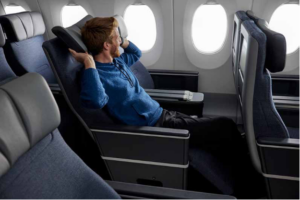 Finnair plans to gradually introduce its new premium economy cabin on long-haul flights to and from Asia and North America through 2022 and 2023. The new cabins will appear on both the Airbus A350 and A330 aircraft, providing passengers with extra amenities. In addition to a high-quality, three-course meal accompanied by a lighter second meal before landing, passengers of the new cabin also enjoy complimentary beverages. Finnair’s premium economy cabin features 7 more inches of seat pitch compared to economy-class seats as well as leg rests and memory-foam cushions. Each seat also comes with plenty of storage features.