AIRLINE FOOD AND THE PHRASE “award-winning” are rarely used in conjunction with one another; however, that is certainly not the case with Japanese carrier All Nippon Airways. The airline’s catering division, ANA Catering Service Co., Ltd., is, in fact, a multihyphenate when it comes to awards and recognition.

As manager for general administration, Japan cuisine, for ANAC, Chef Hiroyuki Kawamura ensures the airline makes the most of the original flavors of each ingredient in the traditional washoku Japanese cuisine. The ANAC team selects seasonal ingredients to help passengers sense and experience the four seasons of Japan while in flight. Additionally, the airline was the first to serve kaiseki, a traditional multicourse Japanese cuisine, on board. 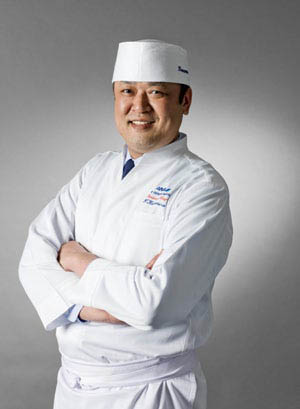 Kawamura began his career in the culinary industry, joining the Japanese Chef Association at 18 and working in various restaurants in the Chiba prefecture before joining ANAC 13 years later.

ANAC’s first facility, in Narita, opened in 1989, since then expanding to Haneda and Kawasaki, both in Tokyo, for a total of three catering facilities.

WHICH DESTINATIONS INSPIRED YOU, AND HOW HAS THAT INSPIRATION TRANSLATED INTO YOUR COOKING/MENUS?
Aged beef T-bone steak in Chicago, fresh uni in Los Angeles: Each was tasty; I would like to explore how to make the most of the original flavors of each food ingredient like that in Japanese cuisine.

WHOM DO YOU CONSIDER TO BE YOUR CULINARY HERO?
My culinary hero is Hiroshi Miyamura. He mastered the techniques and skills in an old Japanese restaurant in Kyoto and taught me about the basics of Japanese cuisine.

WHAT ONE PERSON MOST INFLUENCED YOUR COOKING STYLE, AND HOW?
It’s also Chef Miyamura. Apart from seasoning, the use of plates and dishes and visual presentation . . . he had the most influence on me.

WHAT IS YOUR FAVORITE FOOD CITY?
I recommend Seijogakuen in Tokyo; there is a Japanese restaurant called Seijoukitayama, located in an old Western building. They serve vegetables from the Saga prefecture of Kyushu, fresh and tasty.

WHAT DO YOU THINK THE NEXT BIG TREND ON THE FOOD SCENE WILL BE?
There will be more and more restaurants that serve washoku Japanese cuisine, in which they use local materials and keep the fresh flavors.