IN THEORY, IT’S IMPOSSIBLE for any resort to make everyone happy. In reality, Casa de Campo, a 7,000-acre enclave on the southeastern tip of the Dominican Republic, comes close. Owned by the sugar-producing Fanjul family, the resort has had almost 50 years to develop great hospitality and world-class facilities for tennis, polo, sporting clays and, of course, golf. There are beaches, pools, a spa, a fitness center and more than a dozen restaurants and bars. The resort is home to Altos de Chavon, a Mediterranean-style village of shops and restaurants, and a huge marina with international stores and eateries. Resort lodging ranges from airy casitas to villas with cooks and butlers. Each room/villa comes with a four-passenger golf cart.

Golf at the resort spans almost five decades, too. It’s a love story of sorts, representing Pete Dye’s family’s enduring affection for the Dominican Republic and its people. In the early 1970s, Pete, Alice and their son P.B. worked with locals wielding pickaxes and driving oxen to shape the country’s first golf course. They called it Teeth of the Dog for the coral “jaws” on the signature 16th green, one of seven holes on the ocean. Pete and Alice went on to design the inland Links, a daunting track threaded among lakes. In 2000, the first nine of Dye Fore opened on cliffs 300 feet above the Chavon River. Today it’s a 27-hole complex with spectacular views of the river (Chavon Nine), the marina (Marina Nine) and a network of lakes (Lagos Nine).

Teeth of the Dog is one of those courses you must play before you die. It’s ranked 27th in the world by Golf Digest and remains the standard by which all other courses built in the Caribbean have been judged. You’ll want to play all 63 holes at Casa de Campo — but play TOD first. The wind makes it different every day, and varying aspects of sand and ocean come into play. It’s 7,263 yards from the back tees, but most resort golfers find the 6,969-yard (74.4/134) tees sufficiently challenging. The inland holes offer a feast for the senses, lined with mature palm, bitter orange, almond and teak trees, along with flowering bougainvillea and hibiscus. Fairways are deceptively generous, but prepare for waste bunkers, pot bunkers, swales and water on the way to subtly sculpted — and often raised — greens.

HOLE 5 | 168 yards*, par 3
After an introduction to sand — lots of it — in the opening holes, you arrive at the first ocean hole, where one of the smallest greens on the course features water on three sides and a distracting tree on the right front. Surf pounds the rocks supporting the tee boxes, setting the stage. It’s not a long hole, and it’s often downwind, but the intimidation factor is strong.

HOLE 7 | 227 yards*, par 3
The fifth hole is a rehearsal for this one, which demands a longer carry over the shallows, where the surf surges over coral. The larger green is more contoured and bordered by a kindly catch bunker on its seaward side. Less friendly sand hazards dot the upper fringe. A wayward chip from there can find the sea. 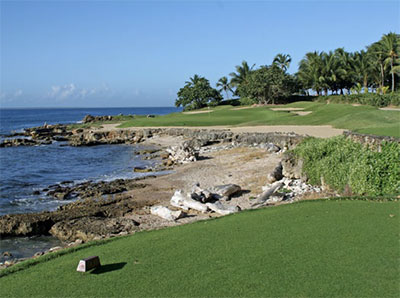 HOLE 8 | 413 yards*, par 4
Even a conscious effort to stay right on your drive and not to flirt with the sea can be futile. The right side of the dogleg left is well-bunkered, and the fairway slopes left, often helped by the wind. The result: an approach shot over a bunker centered in a deep swale to an L-shaped green. If you miss long and right, a yawning grass pit awaits.

HOLE 14 | 499 yards*, par 5
Teeth of the Dog returns to the sea with temptation off the tee. You can reach the green in two if you hug the waste bunker lining the fairway from tee to green at the ocean’s edge. The three-shot approach is via the wide fairway, but everyone must contend with the elevated, forward-sloping green which sheds balls in all directions.

HOLE 16 | 183 yards*, par 3
This, the course’s namesake hole, features frothy waves churning the right side. A pair of bunkers stair-stepped into the front face of the two-tiered green keeps short shots from tumbling to the sea. There’s no safety in going long because bunkers no one would want to chip from back the green.

HOLE 18 | 473 yards*, par 4
This slight dogleg left does not allow you to let down your guard. A deep finger of sand cuts into the fairway from the left, narrowing the landing area. Just beyond it on the left lies a small lake. The fairway slopes left, as does the green, dribbling those hopeful chips off the putting surface as diners on the 19th Hole terrace look on.

*All yardage measurements are from the back tee.