A Visit to Old San Juan

One of my favorite ports of call on our two-week December Caribbean cruise aboard Holland America‘s ms Nieuw Amsterdam was San Juan, Puerto Rico. We sailed into the harbor of Old San Juan right around noon on Pearl Harbor Day, rounding the point where El Morro guarded the entrance,

cruising past the old city walls 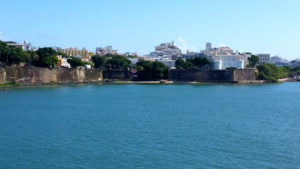 and past a tall-masted sailing ship

before docking at one of the cruise piers within walking distance of many historic sites which dot the city. Founded in 1521 by Ponce de Léon, San Juan is the oldest city in U.S. territory.

The massive city walls and fortifications which protected the city and its inhabitants still stand today, and these were the focus of the first half of our day. With the ship scheduled to set sail at 8 p.m., we decided to focus our visit on the old city, saving explorations for the nearby rain forest and the beaches and newer city for another, longer visit.

We first entered Castillo San Cristóbal, along with El Morro a UNESCO World Heritage site and part of the San Juan National Historic Site. Operated by the National Park Service, a visit here requires a very modest $5.00 entrance fee which covers both sites. This massive fort is one of the largest fortifications in the New World, and we climbed up its steep ramps and stairways 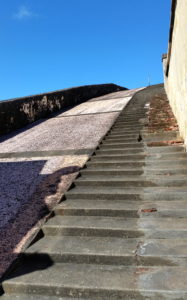 to gain access to gun turrets offering awesome views of El Morro and the shimmering sea. 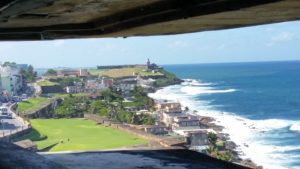 On the way up we were greeted by large, stoic iguanas who enjoy sunning themselves on the walls and grazing on the vegetation sprouting from the ramparts. 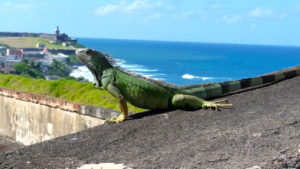 Our perch also offered a view back down the hill to the cruise ships below. 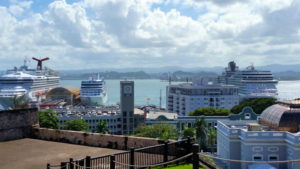 The fort was occupied by U.S. forces up through World War II, and displays and videos (as well as ranger-led talks) throughout the complex allow visitors to understand daily life for soldiers stationed there throughout the centuries. We found the large plazas quite warm but were instantly cooled as we stepped into surrounding rooms housed within the thick walls and “air conditioned” by the breezes sweeping in from the ocean through open casements. 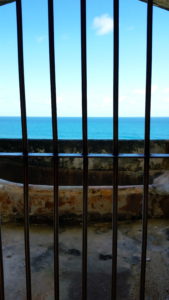 We then followed the city walls out to Castillo San Felipe del Morro (El Morro). It involved a walk of more than a mile, but free trolleys circulate throughout the Old Town for those who find trekking a struggle, particularly on hot days. The scale of these fortifications awed us, and we again found ourselves admiring views of the lighthouse 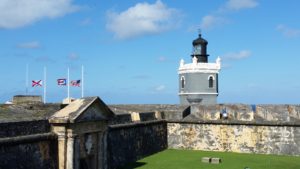 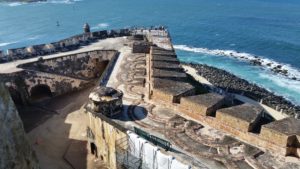 while at the same time drinking in the beautiful blues of the sea and sky.

The rest of the day found us winding our way through the colorful, narrow streets, 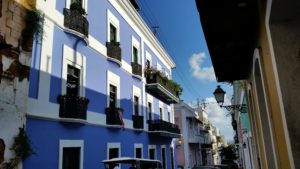 stopping at an open-air bar near the School of Fine Arts for some cold cervezas and snacks before continuing our meanderings. We took a quick look into El Catedral de San Juan Bautista, 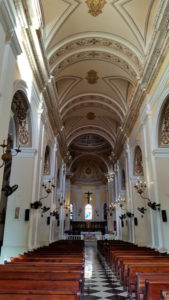 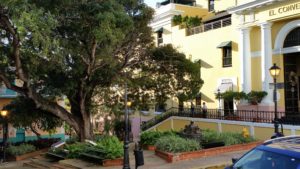 and peeked through the gates to view La Fortaleza, the official Governor’s residence, all decked out for the holidays. 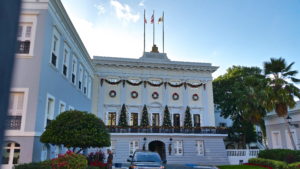 We made our way slowly back to the pier, poking into boutiques and galleries along the way and stopping to admire the statue of Christopher Columbus in Plaza Colón. 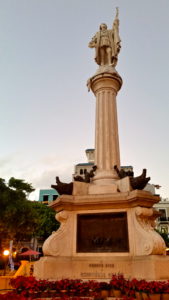 It was a thoroughly delightful day, with a wonderful mix of history, culture, fresh air and sunshine, shopping and food and drink, spent with good friends. I would love to spend more time in this lovely place!