THE START OF A JOURNEY. Apprehension mingles with excitement. What lies ahead? Standing on Scotland’s west coast, we know the bare bones of what we’re facing: 134 miles of hiking, a coast-to-coast traverse of the country. But what will we see along the way? Who will we meet? How wet will we get?

We’re in the seaside town of Helensburgh, northwest of Glasgow. A circular stone inlaid on a lawn beside the town pier marks the exact starting point of the John Muir Way.

The man — and the hiking route named after him — are synonymous with wilderness, yet for the first 30 minutes we tramp along pavements, passing shops and houses. It’s only when we leave town that a true sense of adventure kicks in, and we inhale the scent of pine and bracken.

Breaking from woodland into open ground, the countryside transforms into a typically Scottish patchwork of browns and greens, interspersed with purple clusters of thistles. The path wends steadily inland. Three hours after leaving the coast, we reach another body of water, Loch Lomond, and the bustling tourist town of Balloch. We’ve completed the first of the walk’s 10 official stages.

The second day briefly takes us along the leafy shore of Loch Lomond, skirting the picturesque Balloch Castle, before the little purple logos marking the route steer us inland again. Is it raining? Of course it is. Few people — if any — complete the entire route without having to put on their waterproof jackets and trousers. This is the typical native weather experienced in boyhood by John Muir, the legendary naturalist, who emigrated to the United States with his family in 1849 at age 11. He is credited as one of the founders of America’s system of national parks.

Scotland forged his love of the natural environment. The scenery unfolds gently, with easy hills and views across fields dotted with sheep. In America John Muir found vistas on an entirely different scale, as evidenced by another long-distance hiking route named in his honor, the John Muir Trail, which threads through 160 miles of California’s Sierra Nevada.

The Scottish route, certainly less spectacular and much tamer than its American equivalent, exudes old-world charm set in an ancient landscape shaped for millennia by man, beast and the forces of nature.

Over significant portions of the route, the influence of man predominates. Some stretches utilize a disused railway slicing straight and smooth through woodland; it’s easy walking but boring. Occasionally, sometimes abruptly, the little purple signs lead us out of the countryside into towns, and we must temporarily adjust to pavement and traffic. 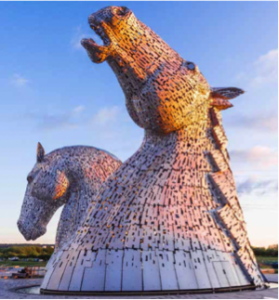 The town of Falkirk offers two manmade highlights: The Falkirk Wheel, a futuristic elevator that lifts boats from one canal up into another, and The Kelpies, 90-foot-high steel sculptures of two horses’ heads which, since completion in 2013, evolved into a proud symbol of Scotland.

On Stage Six, water. We still anticipate significant distance to go to the end of the John Muir Way, but with our first sight of the Firth of Forth we’ve effectively reached the east coast. This broad estuary meets the North Sea, bringing the scent of saltwater and sights of ships, ferries and dolphins. Ahead of us looms another unmistakable landmark: The Forth Bridge, the world’s second-longest cantilever bridge and one of the wonders of Victorian engineering (not to be confused with the nearby Queensferry Crossing, a colossal new road bridge that opened in 2017, and the older road bridge between them).

Stage Seven takes us into the city of Edinburgh, where we incongruously tramp in full hiking gear among the locals and tourists. Some hikers choose to have a rest day here among the sights and pubs. It’s tempting to stay longer, but the remaining miles won’t walk themselves. And so, on another characteristically damp day, we find ourselves crossing a succession of busy roads back to the Firth of Forth.

Although much of the shore is given to towns and golf courses, this truly is John Muir country … his boyhood tramping ground. The penultimate day takes us to North Berwick, and now we face the sea. The last stage, 15 miles, usually completed in around five hours, takes us down the coast to Dunbar.

Why finish here? Well, we’ve seen his name and bearded face often enough on the route signs, and now, on the town’s High Street, two blocks back from the seafront, we locate a three-story white house from which fly the flags of the United States and Scotland. The sign beside the door tells us we have reached John Muir’s birthplace. Our journey ends where his began.

INFO TO GO
International flights arrive at Glasgow Airport, 23 miles southeast of the John Muir Way trailhead at Helensburgh. Bus and taxi services operate from the airport to the town. On completion of the trail, take the train from Dunbar to Edinburgh (25 minutes) and from there to Glasgow Airport (65 minutes).

Embark on a Multigenerational Trip with the Family