WHIRLING WOMEN IN LONG, FLARED skirts in an absolute riot of colors, patterns and jewelry, and men clad in pajama-style pants and short tunics dance ever faster, whipped into an ecstatic frenzy by rhythmic drums and songs: The Navratri dance festival in Gujarat presents a flamboyant spectacle you’ll never forget.

Sandwiched between Rajasthan and Maharashtra states, India’s westernmost state, though exceedingly rich in cultural heritage, ancient crafts and Indian independence movement history, is often omitted from tourist itineraries. One of the country’s most ethnically diverse states, populated by Hindus, Muslims, Jains and Parsis, it includes the Kutch, an off-the-beaten-track region of craft villages renowned for high-quality handicrafts made by ethnic minorities and a surreal-looking white desert (actually, salt plain) that transforms into marshland during the rainy season. Kutch also encompasses the birthplace of Mohandas Gandhi (and his headquarters when he led India’s struggle for freedom from Britain) and India’s first UNESCO World Heritage City, Ahmedabad. Its old town’s 15th- to 17th-century buildings blend Hindu and Muslim architecture. Also here: two colonies of Portugal that joined India in 1961 and Asia’s last surviving lions.

Gujarat is the only state in India where Navratri, a popular Hindu festival honoring the goddess Shakti in September or October, is celebrated for nine solid nights in cities and villages by people of all faiths. Each night marks a different manifestation of the goddess, such as Lakshmi, the goddess of prosperity; Saraswati, the goddess of wisdom and the arts; and Durga, who killed an evil demon. The garba dance, performed with circular arm and foot movements, spins around a shrine to Shakti or a lamp. Another dance, dandiya raas, features women and men brandishing painted bamboo sticks.

The Rann Utsav festival presents another wonderful opportunity to experience the culture and traditions of the Kutch (Kachchh) and admire its crafts — especially textiles in a dazzling variety of patterns, styles and techniques. Held from late October through late February, it starts and ends in Bhuj, the capital of Kutch, and features music, dance and tours by car of highlights of this region in northwest Gujarat, organized by Gujarat Tourism. Lodging includes charmingly decorated tents in colorful textiles boasting attached bathrooms and porches, heating and air conditioning, and mud huts set up near the White Rann desert.

“Tourists can join the festival at any time, but the best time is during the full-moon phase, when the moon shines as bright as the sun and the white plains appear to shimmer,” says Sanjay Choudhary of Services International Ltd. in New Delhi, a tour operator that offers multiday cultural and festival tours to Gujarat. “The tents and huts offer a local-type experience,” and range from luxury two-bedrooms (1,600 square feet) to premium or more modest one-bedrooms (about 400 square feet). Guests can enjoy lovely Kutch-style, thatch-roofed mud hut lodgings called bhungas, crammed with local crafts and furniture, at Rann Riders resort in Dasada.

“India is rich in textiles, and Kutch has historically been the richest region for handmade textiles in India. Its artisans practice individual styles as unique as fingerprints within their beloved ancient traditions,” says Judy Frater, founding director, Somaiya Kala Vidya, a school that preserves traditional crafts and conducts one-day open studio tours to meet some of its 200 artisan graduates in Bhujodi and Ajrakhpur villages. An American who has lived in Kutch for the past 29 years, Frater authored Threads of Identity, a book about local textile styles.

In ajrakh block printing, artisans use wooden blocks to stamp ornate geometric and floral patterns on paste-covered fabric, dipped in repeated baths of vivid natural dyes made from indigo, pomegranate rinds and madder. Its name derives from the Arabic word for “blue,” a major color used in the technique. Bandhani, used for saris and turbans, employs tie-dye techniques in which women pinch fine fabric into thousands of tiny dots and tie them tightly before dyeing.

Nirona village is famous for rogan printing. Artisans use a pen dipped in natural dyes and oil to paint exquisitely ornate, shiny designs resembling embroidery on silk or cotton, often in tree of life, floral or peacock motifs. They then stamp the fabric with metal blocks. “Rogan is a rare craft that is not well-known even in India, practiced by only one family,” says Choudhary of this strongly Persian-influenced handicraft created by men in one Muslim family for centuries. They have more recently trained local young women in the art. It’s such a national treasure, President Obama received one as a gift from Indian Prime Minister Narendra Modi in 2014.

Other crafts include embroidery, often with bead work, tiny mirrors and appliques, some with Persian- and Mughal-style influences; weaving of wool, silk and cotton; and lacquer applied to wooden jewelry boxes and household utensils.

A marriage mart for ethnic minorities clad in a kaleidoscope of costumes — plus crafts, folk dances, music and magic shows — the Tarnetar Fair features men hoisting umbrellas embroidered, beaded and patchworked to the hilt (sometimes topped with ornamental peacocks) to lure prospective brides. Women wear red skirts to signal their eligibility. (This fair boasts a high success rate.) The multiday festival in August or September takes place on the grounds of Triniteshwar Temple, about 35 miles from Rajkot, where Gandhi grew up. 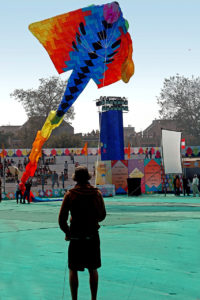 During the International Kite Festival, or Uttarayn, in January, participants fly kites in many designs, shapes and sizes from before dawn until after dark, statewide. The goal of the festive event: bring down rival kites (string coated with glass and glue does the trick). Families and friends gather on rooftops to enjoy the show. In Ahmedabad you start to see kite makers and supplies in November, particularly in the kite bazaar that pops up in the old walled city and operates 24/7. Gujarat’s biggest city has hosted an international kite competition since 1989, featuring entries from Japan, Malaysia, Europe and the United States.

The three-day Modhera Dance Festival in January showcases classical dance forms at the Sun Temple, a partly ruined 11th-century Hindu temple adorned with intricate carvings of scenes from Hindu epics like the Ramayana. This masterpiece of Gujarati religious architecture, designed so dawn sunlight illuminates the image of Surya during the equinoxes, stands in Modhera, about 60 miles northwest of Ahmedabad.

Gujarat with gusto — attend a festival and see for yourself.

INFO TO GO
The Ahmedabad airport, Sardar Vallabhbhai Patel International Airport, lies five miles north in Hansol. Air India, Emirates, Qatar Airways and Etihad Airways operate one-stop flights from New York (JFK); Chicago (ORD); and Washington, D.C. (IAD), via Mumbai (BOM) or Delhi (DEL). Ahmedabad is about a 1.5-hour flight from either city. You can also travel from Ahmedabad to Bhuj via a seven-hour overnight train ride or a short flight from Mumbai or Delhi. A luxury tourist train connecting Gujarat and Rajasthan, The Royal Orient, starts and ends in Delhi.