Travelers around the world are hopeful 2021 will be the year they can take to the skies once again for long-awaited trips to dream destinations. In order to stay on top of constant changes in the travel industry, keep passengers safe amid a global pandemic and somehow still eke out a profit, airlines had to be as flexible and nimble as the rest of us, bobbing and weaving through the unpredictable altitude changes and doing everything they can to stay afloat. As one of the country’s big three airlines, United Airlines introduced new regulations for the current and future states of travel to keep customers committed and help restore faith in flying once again while simultaneously still striving to innovate and improve. At the start of the COVID-19 crisis, United outlined a three-pillar plan: build and maintain liquidity, minimize cash burn and variabilize cost structure.

AS COVID-19 BEGAN TO SPREAD around the globe, United launched CleanPlus as its new standard of cleanliness and hygiene for passengers and crew. Through a partnership with Clorox, the initiative involves using the cleaning company’s products to disinfect surfaces and areas in the more than 360 global airports where United operates (including check-in kiosks, United Club locations, gates and baggage claims) as well as aircraft, and handing out hand-sanitizing wipes to passengers as they board. United also works in close coordination with Cleveland Clinic experts who advise the airline on how to enhance cleaning practices as more information about the virus’s spreading capabilities emerges.

United became one of the nation’s first airlines to announce it would not allow passengers without face masks to board aircraft, to implement touchless check-in to check luggage and to require travelers to complete an online health assessment before flying.

Technological advances that help United maintain cleanliness on board include electrostatic sprays that can disinfect an entire cabin, from floor to ceiling ; ultraviolet C light wands to disinfect commonly touched surfaces like touch-screen displays; and HEPA filters to circulate air and remove up to 99.9 percent of airborne particles. But United also constantly innovates, testing new sanitation methods with artificial intelligence that can perform temperature screenings and crowd detection, drone- deployed UV sanitation technology and onboard antimicrobial technology to add an extra layer of disinfectant.

On Oct. 15, 2020, United became the first U.S.-based airline to initiate a COVID-19 testing program for passengers. As part of this program, travelers on United’s four San Francisco- to-Hawai’i routes have the option to receive a rapid COVID-19 test at San Francisco International Airport on the day of travel or to receive a test via a drive-through service at United’s San Francisco Maintenance Center between 48 and 72 hours before departure. Those who test negative are not required to complete a 14-day quarantine upon arrival in Hawai’i. Both testing options require advance appointments that can be made online.

Later in October United participated in the first successful trans-Atlantic trial of a digital health pass called CommonPass, a mobile app that allows travelers from London Heathrow Airport to input their COVID-19 status and share it with United staff while disembarking at Newark Liberty International Airport. The pilot program — introduced by Swiss-based nonprofit The Commons Project and the World Economic Forum — was monitored by both U.S. Customs and Border Protection and the Centers for Disease Control and Prevention. Passengers were tested for COVID-19 prior to departure, uploaded their test results to the CommonPass mobile app on their smartphones and scanned a QR code upon arrival in Newark to safely enter the country. This uniform method of communicating passengers’ COVID-19 statuses can solve the problems of doctors’ illegible notes or travel release documents in foreign languages. 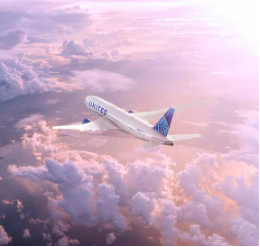 More recently, United expanded its passenger-testing program to international waters. Nov. 16–Dec. 11, United offered free rapid COVID-19 tests to passengers and crew for the airline’s tri-weekly flights between Newark Liberty and London Heathrow — a route that operated six times per week before the pandemic. Passengers who refused the tests would be moved to different flights to ensure all passengers who tested negative would be placed on a flight with others who also tested negative.

The results of this program and customer feedback will be shared with governments in both the United States and the United Kingdom, which United hopes will provide insight and recommendations on how to safely re-open travel networks in a world where COVID-19 doesn’t seem to be going away anytime soon. But encouragingly, United noticed increases in demand when pre-flight testing is possible.

In December 2020 United Airlines, with the support of the Centers for Disease Control and Prevention, announced a program to collect customer contact information for all international and domestic flights. During check-in, United customers will be prompted to voluntarily provide contact information such as an email address, phone numbers and an address where they will be staying once they reach their destination.

WITH A SERIES OF PROMISING protocols in place, United announced the resumption of some of its more popular routes, like its non-stop service between San Francisco (SFO) and Shanghai (PVG), four times per week. As of Oct. 21, 2020, this route no longer requires a stopover in Seoul, South Korea, and instead flies directly on a Boeing 777-300ER aircraft.

In addition to route expansion, United will also expand its presence at all three New York-area airports with a return to John F. Kennedy International Airport. Slow air travel caused by the pandemic freed up slots at JFK, and United saw an opportunity to reclaim some of these Terminal 7 slots after five years away. From JFK United will offer non-stop flights to Los Angeles and San Francisco. The slots have been secured through March but may be extended through spring and summer based on discussions with the Federal Aviation Administration and the Port Authority of New York and New Jersey.

UNITED IS NOT ONLY EXPANDING its routes and destinations but is also improving the services customers use every day. With a new online map search feature at united.com, travelers don’t need to have a destination in mind to find a flight — instead, they can enter more than a dozen preferences like desired dates of travel, home airport, budget and type of destination and view the best flight deals around the country for those specific dates.

United’s mobile app has also been enhanced to make onscreen text and graph- ics more comprehensible for users with visual limitations. Through collaboration with the American Council of the Blind, the app redesign includes increased color contrast and greater space between images. The app also employs integrated technologies like VoiceOver and TalkBack, already available in most smartphones, to convey onscreen information without requiring the user to read text.

THE TRAJECTORY OF THE CORONAVIRUS is unknown, as is the future of airline travel; but if United’s safety measures, cross-cooperation with agencies and nonprofits, and continuous adaptation and innovation are any indication of how airlines will get travelers back to the skies, we can all breathe a sigh of relief.

First settled during the Oklahoma Land Run of 1889, the city of Norman has grown to be the state’s third-largest city. Located just 20 miles south of Oklahoma City, Norman’s latest lodging offering, NOUN Hotel, lies close to Campus Corner and University of Oklahoma, accessible to local shopping and dining options.