I had just taken off my sandals, stepping onto the white-sand beach for a late-morning walk to a secluded spot I heard about from a front desk clerk, when I glanced down and saw the time on my phone. It had just turned 11 a.m., which meant it was only 7 am back home, the perfect time to call and say good morning to by husband before he left for work. Not quite ready to head back to my room, I decided I’d test the WiFi signal and made the call as I continued walking toward the shoreline.

“Good morning from Bora Bora,” I said, half guiltily, as I heard the line connect after just two rings. “Wish you were here!”

The conversation continued as I trudged farther and farther away from the canopied loungers and sun beds sunken in the sand. I gripped my phone a little harder as I took my first step into the crystal-clear water, letting the salty, still liquid cool my toes and rise higher up my legs as I stepped deeper and deeper into the shallow Pacific Ocean lagoon. Up to my waist in seawater, I ended the call as I finally reached the aim of my morning journey.

With one last, “Miss you,” I hung up the phone, placed it in a waterproof bag and collapsed into a private overwater hammock that hung loosely between two poles so the netting barely kissed the water’s surface as I swung slowly. All alone. Not another living soul in sight. 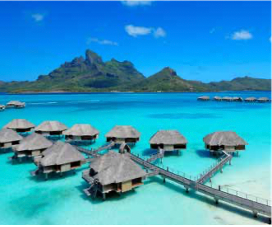 Often regarded as a honeymoon destination due to its romantic scenery and private overwater bungalows, Bora Bora’s recent connectivity and increased flight schedules from U.S. hubs make this Polynesian paradise more accessible for solo travelers and business men and women looking to kick back and escape the grueling 9 to 5. The island sits within the French overseas territory of French Polynesia, a country divided into five groups of islands: the Society Islands, the Tuamotu Islands, the Marquesas Islands, the Austral Islands and the Gambier Islands.

Only 67 of the country’s 118 islands and atolls are inhabited, with the majority of Tahitians residing within the Society Islands, home to French Polynesia’s most famous islands of Tahiti, Moorea, Tetiaroa and Bora Bora. With a larger-than-life reputation as the Pearl of the Pacific, Bora Bora consists of a series of smaller islands (motus) and a main island encompassing less than 15 square miles in total. Most of the resorts in Bora Bora reside on their own private motus, a short boat or helicopter ride from Bora Bora’s main port of Vaitape. The main island centers around a dormant volcano that rises dramatically above the lush jungle floor into two peaks, Mount Pahia and the showstopping Mount Otemanu.

The most sought-after accommodations within Bora Bora feature views of Mount Otemanu, Bora Bora’s unofficial icon, and no resort offers a better view than Le Méridien Bora Bora. This Marriott-owned resort features overwater bungalows with unobstructed views of Mount Otemanu and direct access to the water from each private outdoor deck. The resort’s casual restaurant, Le Te Ava, allows guests to dine in the sand in the shade of a traditional Polynesian thatched roof as they sample one of the most beautiful renditions of Tahiti’s national dish, poisson cru, a ceviche-like item prepared with raw tuna marinated in lime juice and coconut milk.

The resort also hosts the Bora Bora Turtle Center turtle sanctuary within the Ecological Center. Le Méridien offers a daily visit at 10:30 a.m. with a turtle feeding. For a fee, visitors can participate in a Live My Life session, in which they interact with these amazing creatures and participate in the care and healing of the sea turtles alongside the team of biologists.

All of the resorts along Bora Bora’s motu lie just a short boat ride from each other, making it easy to hop around with a pre-arranged water taxi or boat transfer to other resorts or even back to Vaitape to explore the small markets that come to life in the early afternoon or go celebrity- spotting at the sandy-floored seafood joint, Bloody Mary’s. The often- crowded restaurant’s low-key vibe attracts famous names like Pierce Brosnan, Jimmy Buffet, Kurt Russell, Kareem Abdul-Jabbar and others.

Visitors looking for fine dining won’t find it at Bloody Mary’s, but they will at the island’s often-regarded-as-best Lagoon Restaurant by Jean-Georges. The restaurant sits over the water at The St. Regis Bora Bora, where this Michelin-starred chef created a menu worthy of his many accolades. Find uravena on the menu. This local fish presents a formidable challenge to most chefs in its preparation, so this is a highly rare dish. The restaurant itself sits on a dock where glass-paneled flooring alone stands between diners and the black-tipped sharks that lurk in the water beneath the restaurant. 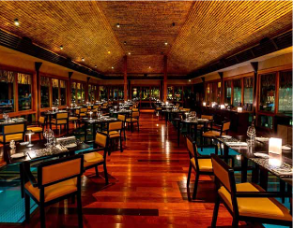 The St. Regis Bora Bora features large overwater bungalows in the South Pacific, where rooms include private gazebos, glass-paneled floors, private plunge pools and direct access to the water via private ladders. The resort’s accommodations range from garden villas with a private beach to overwater villas and royal overwater villas, as well as the jaw- dropping royal estate.

Guests of the resort split their days between relaxing just off the beach in the resort’s private offshore hammocks and sipping drinks at the swim-up pool bar or heading off the motu for some Tahitian adventures. The resort can arrange everything from full-day scuba diving excursions to Jet Ski tours of the islands, putting guests behind the controls of a state-of-the-art water craft as they zip in and out of the motu and lagoons. True adventure seekers can book half- or full-day tours with Lagoon Service Bora Bora.

Coconuts appear throughout Polynesia in everything from gastronomy to health remedies, but no coconut creation is more representative of Tahitian culture than monoi oil. The oils are delicately scented with the petals of a tiare flower and can be found on the spa menu at Iridum Spa at The St. Regis Bora Bora. The oils have a softening effect on both skin and hair and make for a great souvenir to recall time spent taking in the beauty, relaxation and little luxuries of the Tahitian Islands.

Le Méridien Bora Bora
Each of the bungalows offers stunning vistas, but the overwater bungalows with Mount Otemanu views earned this resort the reputation of having the best in Bora Bora.
Motu Tape, Bora Bora
$$$$$

Bloody Mary’s
Less known for its cuisine than its iconic Polynesian atmosphere, Bloody Mary’s is a must-see while in town, even if just to grab a drink.
Povai Bay, Bora Bora
$$$