FEW CITIES MANIFEST the broad impact and influence of global cultures as does Toronto. Canada’s largest city claims 130 languages and dialects, with 50 percent of the city’s population born outside of Toronto. With that influx of diverse immigrant communities comes a delicious smattering of food, art and diverse culture you can’t help but explore.

Toronto welcomes travelers from all over the world. Unless you’re a U.S. citizen or already have a valid visa to enter Canada, you’ll need to apply for Electronic Travel Authorization, which you can do online for about CAD7 (about USD5). Most flights arrive at Toronto Pearson International Airport. You can opt for a taxi or rideshare into the city or take the Union-Pearson Express train, a dedicated rail line between the airport and downtown Toronto. It leaves every 15 minutes and costs up to CAD12.35 (about USD9). But if you can fly Porter Airlines or Air Canada into Billy Bishop Toronto City Airport, do so. It’s the easiest and closest airport to downtown Toronto, and you can be in the heart of the city and close to your meetings, hotel or lunch reservation within minutes of landing.

If you’re traveling to Toronto for business, you may have a conference at either Metro Toronto Convention Centre or Enercare/Beanfield Centre. Both state-of-the-art convention centers are conveniently located downtown, where you can book a room at the new Hotel X. This sleek, modern facility offers spectacular waterfront views from most rooms and a slew of luxe amenities including the threelevel rooftop SkyBar, a 250-seat cinema, tennis and squash courts, on-premise dining and the Guerlain Spa. Or head a few blocks off the lakefront toward Old Toronto and the Entertainment District and book a room at one of the many upscale hotels such as The St. Regis, The Ritz-Carlton or the new Bisha Hotel. This super-sexy hotel, set in the shadow of Toronto’s iconic CN Tower, features black marble, etched gold and crushed velvet in the lobby; plush furniture; modern art throughout; and a rooftop pool — even an entire floor designed by rocker Lenny Kravitz. 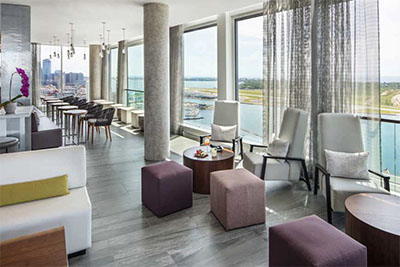 Get a bit away from the downtown congestion and head about 20 minutes north to posh Yorkville, a quaint village within the city where you can stay at the Park Hyatt, InterContinental or Four Seasons. Dine at intimate eateries like ONE Restaurant, with outside seating on the tree-lined patio, or Kasa Moto for Japanese dishes on its rooftop. Enjoy a brunch meeting at Café Landwer or hit the classic Sotto Sotto for Italian fare and the occasional celebrity sighting.

To get a real feel for the depth of Toronto’s global diversity, you need to get into the neighborhoods and seek out the various immigrant enclaves. Start at Kensington Market. Unlike the vibrant, indoor, 200-year-old St. Lawrence Market food hall in Old Toronto, Kensington is an eclectic bohemian neighborhood with a mix of casual restaurants like The Dirty Bird for chicken and waffles, Jamaican- Italian hybrid Rasta Pasta, King’s Café for Asian with plenty of vegan options, fantastic Chilean at Jumbo Empanadas, Vietnamese noodle deliciousness at Phở Hưng, Seven Lives for some of the best Baja tacos around and so much more. Plan to spend some time wandering around all the shops before you pop over to adjacent Chinatown not only for Chinese fare but also Thai, Vietnamese and other delicacies at restaurants and street stalls. If you want a more upscale experience, try Lee, a Chinese-French spot from acclaimed chef Susur Lee a short distance from Chinatown in Old Toronto. 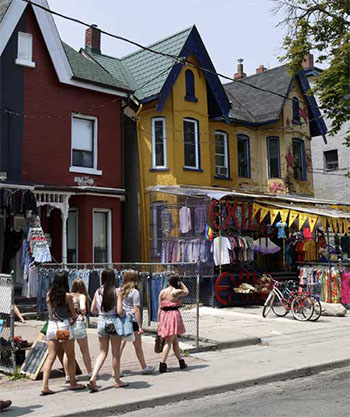 Need more ways to explore the city’s diversity? There’s Roncevalles for a taste of Poland, Little Italy, Koreatown, Little Portugal, Greektown, Little India or the historic Distillery District. There you’ll get a taste of 19th-century Toronto with cobblestone streets, refurbished factory buildings and a former whiskey distillery. You’ll find hip restaurants and shops as well as modern brewpubs and the Spirit of York Distillery, producing quality gin, vodka and other specialty spirits like aquavit.

Time to shop? Skip the big-box chains and head to the trendy Ossington Strip, a street lined with charming, independently owned boutiques like Jonathan + Olivia, gravitypope, Annie Aime, Reigning Champ, Detroit import Shinola and other cute places to pop into and poke around.

If your work schedule allows you to indulge your love of sports, Toronto is one of the best professional sports cities in the world. You can get year-round live sports between the Raptors, Argonauts, Blue Jays, Maple Leafs, FC and Wolfpack, no matter whether you like basketball, baseball, soccer, rugby or hockey.

And Toronto has a thriving gay culture. While historically much of the action centers around The Village (aka the Gaybourhood), you can find LGBTQ+ influences all over the city, especially during the annual 10-day Pride celebration in June, which seemingly the entire city comes out to support.

Whether you come to Toronto for a quick business meeting or extended conference, this welcoming city begs you to stay and explore. You’ll be happy you did.