Things That Go Bump in the Night

ON A DARK, MOONLESS NIGHT, my friend and I joined a small group as we quietly walked the narrow cobblestone streets of New Orleans, listening to our guide tell tales of the sights around us. She pointed to shadowed, curtained windows, some even shuttered, and described unimaginable acts that took place behind them. She shared stories of horses and wagons rolling along these same streets, carrying the dead. She talked of “people” said to have been spotted for generations. Our group hung onto our guide’s every word as we crisscrossed the city during Haunted History Tours’ New Orleans Vampire Tour. Afterward, over drinks, we recounted the stories we had heard, imagining what had happened in the bar where we sat … across the street … in our hotel … and what spirits and otherworldly creatures may lurk about.

Imagine our surprise the next morning as, snuggled in the comfort of our beds in the hotel room, we tuned the TV to the Travel Channel only to see our guide from the night before telling some of those same vampire stories to a national audience.

New Orleans is considered the most haunted city in the United States, “a place where the dead refuse to rest” and which voodoo queens, professed vampires and other practitioners of the mystical arts call home. This city embraces its darker side and “welcomes everyone: the living, the dead and those souls in between.” In fact, one can enjoy myriad vampire, ghost and cemetery tours year- round, and New Orleans & Company even developed a haunted walking itinerary that highlights spots throughout the city where visitors are most likely to encounter spirits.

When asked about New Orleans’ appeal to those who seek haunted destinations, Sidney Smith, owner, Haunted History Tours, explained, “The earliest French settlers were warned by the Native Americans not to build a city here because the area was cursed. Violent death and strong emotion contribute to hauntings and paranormal activity, and we’ve had no shortage of it.

In February the Travel Channel surveyed more than 2,000 people from across the United States about their haunted travel interests and shared its findings in the “Open Mind Strategy/ Travel Channel Quarterly Trend Report.” Through the survey, researchers discovered 51 percent of those asked agree they have an interest in traveling somewhere known for being haunted or having paranormal activities, and when queried, 58 percent agreed they believe in ghosts.

Getting back to vampires, Dracula may be a fictional character dreamt up in Bram Stoker’s mind, but though the author never visited Romania himself, Dracula’s castle was based upon a description of the very real Bran Castle in Transylvania. In his novel, Stoker wrote Dracula’s castle sat “… on the very edge of a terrific precipice … with occasionally a deep rift where there is a chasm [with] silver threads where the rivers wind in deep gorges through the forests.” Voilà — Bran Castle. Last year, the castle remained the No. 1 attraction in all of Romania, welcoming more than 835,000 curious guests. Embracing its vampiric legacy, Bran Castle will host a Halloween party Nov. 2. 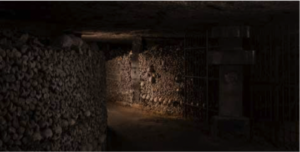 The Catacombs of Paris have been an attraction since they first opened to the public (by appointment only) 210 years ago, in 1809. In 2018 480,000 people visited the world’s largest ossuary, or room in which the bones of dead people rest. To reach the ossuary, visitors must descend 113 steps into the cool tunnels, where they follow a nearly one-mile path, flanked with bones and skulls on either side. It takes approximately an hour to wind past the remains of the dead before climbing 112 steps back to fresh air.

Taking another look at Travel Channel’s “Open Mind Strategy” report, 53 percent of respondents indicated they don’t believe in ghosts but might get freaked out in a haunted house. If it’s spooks they’re looking for, myriad options await across the United States, from one-off haunted houses to theme parks completely transformed to add fright to the night.

The haunted house industry takes loads of frightful imagination and surprises to catch even the professionals off guard. That is just what The Darkness in St. Louis did when it opened its doors to the Haunted House Association during an annual trade show in March. It is so frightening, the association deemed The Darkness “one of the best haunts in the entire world.”

Halloween Horror Nights returns to Universal Orlando for another chilling run; it received the Best Halloween Event Golden Ticket Award for 11 years from Amusement Today. Those on the West Coast need not fear — Halloween Horror Nights will terrify park goers at Universal Studios Hollywood, too. Both parks feature Stranger Things from Netflix, and taking a cue from the era of the popular series, “the ’80s return with an all-new vengeance, bringing with them some of the biggest frights from the era.”

Universal Orlando and Universal Studios Hollywood will each give park goers bone-chilling thrills with 10 all-new haunted houses full of terror; one of the houses at each park features seasons 2 and 3 of Stranger Things. Each of the two parks also features five scare zones and live entertainment. Halloween Horror Nights, which frights on select nights through Nov. 2 in Orlando and Nov. 3 in Hollywood, promises “no escape from the decade that just won’t die.” 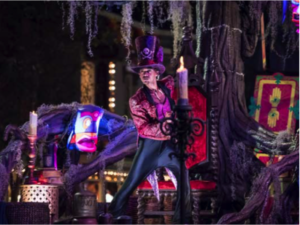 Seeking out thrills and chills is not just for an older crowd, however. This year, Mickey’s Not- So-Scary Halloween Party began mid-August at Walt Disney World in Orlando, and the spooktacular party continues on select nights through Nov. 1. Kids can dress up as their favorite Disney characters or create their own characters; go trick- or-treating throughout the park (teal-colored treat bags are available for those with allergies); mingle with Disney characters dressed in their “haunt- couture”; watch spellbinding performances; and enjoy a new fireworks spectacular complete with state-of-the-art projection effects, lasers and lighting.

On the West Coast, Disneyland and Disney California Adventure Park at Disneyland Resort in Anaheim, California, get in on the fiendish fun, too. Spooky décor, characters in their Halloween costumes and entertainment that will live on in dreamland can be found throughout the two parks through Oct. 31.

“Haunted tourism is a very real and often overlooked industry,” explained Amy Bruni, co-host of Travel Channel’s Kindred Spirits and owner of boutique para- normal travel company Strange Escapes. “Allegedly, haunted sites are noticing more and more that their ghosts are actually attracting guests — and interest — more than ever before. This has every- thing to do with the popularity of paranormal television and horror films and also the fact that ghosts are a belief system for many. They [people] want to know more, and sometimes the idea of experiencing something spooky and then being able to leave is the perfect opportunity to do so.”