Research done by travel experts at money.co.uk recently uncovered every country’s most-searched ski resort for 2022. Utilizing multiple reputable travel sources, researchers created a list of more than 1,100 ski resorts worldwide before using the Google Keyword tool to analyze searches (both in English and translated) for terms ‘ski’ and ‘resort’ in every country.

The study found Lake Tahoe ranks as the most-searched ski resort within the United States, with 14 states searching for this resort above all others in the country. The second-most popular ski resort for Americans is Killington, Vermont. 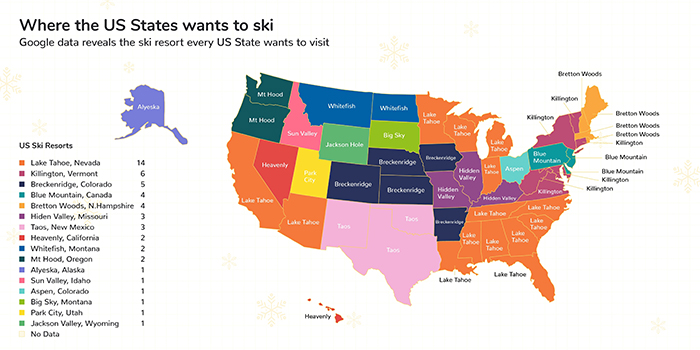 The study revealed these ski resorts as the most-searched resorts in the United States:

The study also looked at ski resorts across the world and revealed some interesting finds. The study discovered Bansko in Bulgaria is the most popular ski resort in the world as it is the most-Googled place for skiing in 11 countries. Countries wanting to ski the most in Bansko include Israel, Kuwait, Northern Ireland, Qatar, Romania and Ukraine. The second-most popular ski resort worldwide is America’s Aspen, with nine countries ranking it their most-searched ski resort. 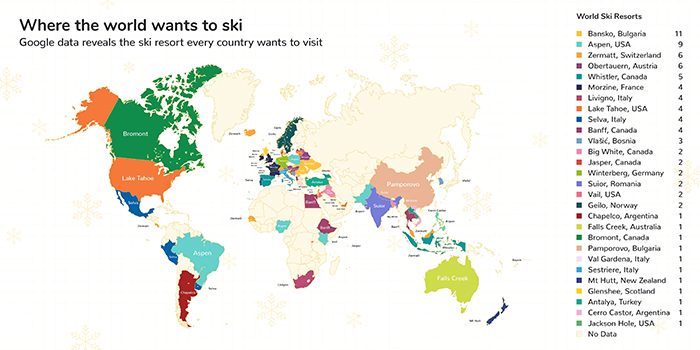 The study revealed these ski resorts as the most-searched resorts in the world:

Learn more about the full survey.