LONG BEFORE THE FORMATION of the European Union, or even the United States for that matter, St. Petersburg, Russia, stood as a strong city with a keen eye for globality. Prior to the city’s founding in 1703, Emperor Peter the Great was said to have brought in hundreds of foreign experts from around Europe to consult on the city’s architecture, construction and administration in order to fulfill his vision of creating the “window onto Europe.” The results from his work are still evident today as St. Petersburg remains one of the largest hubs for multinational corporations.

St. Petersburg acted as the capital of the Russian Empire for more than 200 years before the capital moved to Moscow in 1918, but today St. Petersburg is second to Moscow only in terms of population (5 million compared to Moscow’s 10 million). St. Petersburg’s economy is growing faster than Russia’s as a whole as new industries emerge and the real estate market experiences the largest boom the city has seen in decades, followed by transportation and manufacturing growth. Locals refer to the city as Russia’s northern capital, and St. Petersburg’s strategic position on the Neva River, along with its valuable geo-economic situation and proximity to the rest of Asia, Europe and the Middle East, make it an ideal place for doing business.

The workday typically begins at 9 a.m. in St. Petersburg, and office workers and managers alike generally arrive in formal business attire (business suits for men and below-the-knee skirts for women). Traffic is notoriously congested during rush hour in the city, and many businesspeople take the city’s highly efficient and affordable (not to mention beautiful) metro to get to and from the office. Town cars (like the ones from Blacklane) have become popular in recent years, as business professionals can get a little work done while sitting in traffic. The city also operates numerous trams, buses and marshrutkas (private minibuses that run a fixed route between two places); and while the systems are incredibly affordable (mere pocket change gets you through the entire city), they are often difficult for visitors to navigate. Taxis are still unreliable in the city, as after the fall of the Soviet Union, anyone with a car could operate as a taxi. Although the system is improving, it’s still best to opt for a private town car or use the city’s easy-to-navigate metro system (many signs throughout the city are in Russian and English).

Russian business culture is relationship-based, and the culture in St. Petersburg takes that to a new level, with many mid-morning meetings turning into impromptu “get to know you” lunches. Impress clients with a formal lunch at Restaurant Palkin, the oldest restaurant in St. Petersburg and a favorite of the tsars and tsarinas. The restaurant, in the central Nevsky Prospekt district and opened in 1785, features modern menus and an atmosphere of effortless elegance. The restaurant reopened in 2002 following extensive renovations and now features multiple dining halls including the fireplace hall, the chess hall and the large hall (along with the bar and the red foyer). The restaurant is a treat, even for locals, and it’s best to make a reservation a few days in advance to ensure a table will be available during lunch hours. Make sure to try the restaurant’s famous handmade burrata or its version of the popular Russian salad Olivier, which comes with fish eggs and is served with quail and beef tongue. 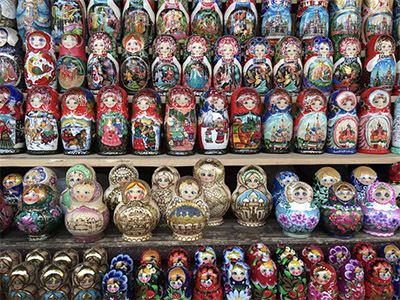 For a less formal but equally gastronomically impressive lunch option, Café Dreamers proves a favorite for young professionals or any diners who deem themselves gourmands. Located off the Fontanka River near Nevsky Prospekt, the café presents a fun, young vibe where industrial lights hang from the ceiling just beyond murals and whitewashed brick walls. The wine list is as creative as the cuisine, but it’s the restaurant’s coffee that has locals buzzing, as each batch of coffee beans is micro-roasted specifically for the café.

The workday typically lasts until 6 or 7 p.m. — even during the White Nights of June and July when the sun does not set and the night sky turns a blue hue instead of going fully dark — and it’s common practice, especially on Fridays, to head out for drinks with co-workers before heading to dinner. Wine bars have come into fashion in Russia, where imported wine was once hard to come by. Now places like Prosto Vino and Vinnyy Shkaf prove the hottest places to be after work hours as bartenders pour imported wines from France, Italy and Portugal.

Although Russia is best known for its vodka, and many meals begin and end with an ounce of the clear spirit, while in town try Russia’s lesser-known spirit, polugar, a historic form of vodka made from rye or other grains, giving it a natural bready taste and aroma.