FOR NINE YEARS NOW, Global Traveler has celebrated its annual GT Tested Reader Survey awards at the 5-star Peninsula Beverly Hills in Los Angeles, California. Each year when we descend upon the hotel for the event, it does feel a bit like returning home, or at least to what is akin to my home away from home in the City of Angels. My December 2019 visit proved no exception, although one of the property’s sanctuaries did look different. I wanted to check out this remodel of a familiar space and see the new facility. Luckily for me, that refreshed venue was the hotel’s equally stellar spa.

Last summer The Peninsula Beverly Hills completed a renovation of the 4,600-square-foot facility, located on the fifth floor near the rooftop pool, allowing for a day of pampering and relaxation. Entering the spa feels glamourous, with lit flower décor adorning the walls and clean white and gray marble surrounding reception. Fresh, beautiful floral arrangements and an extra-large, deliciously scented candle beckon patrons deeper into the ultimate relaxation zone. As the friendly receptionist showed me around the refreshed facility, she told me plans to renovate the fitness center, located directly behind spa reception, would begin shortly. 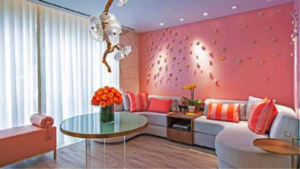 After the tour I changed into the comfy, plush robe, slipped into the slides and eagerly awaited my therapist in the refreshed serenity lounge. Post-facial, I spent a few minutes back in this room enjoying the most delicious ginger tea. Spa-goers can also enjoy light nibbles like zucchini muffins and turmeric shots here, as well as magazines and adult coloring books. The pink color on one of the walls, which dances with a butterfly motif, and the pops of pink and orange in the pillows are both energizing and calming, beckoning you to take a moment but giving you the burst you need to take on the rest of the day.

Salt seems to be having its moment in the spa world; of my last three spa experiences, The Peninsula Beverly Hills included, all featured Himalayan salt in some way. At The Peninsula, it’s in the saunas. The pink Himalayan salt dry saunas, part of the renovation, are activated by heat and aid in digestion, memory and mood by helping to release serotonin in the body. Other elements of the redesign include textured wall coverings, new lighting and art, a new hair and makeup studio — of extra importance in Los Angeles’ world of red carpets — and a spa cabana that takes express treatments, including reflexology and vitamin treatments, outdoors.

It was time for my own facial, the 60-minute BR Biologique Recherche Facial, described on the spa menu as an “intensive and sophisticated facial.” After an in-depth analysis of my skin by the therapist, who everyone I encountered told me was the best (I have to agree!), there followed a cleansing and exfoliation. Afterward, the therapist used her hands to lift my skin and muscles; the technique, as she told me, is intended to tighten the skin and promote elasticity. Careful to avoid excessive redness as it was my first time using some of the products, she was gentle yet effective. After the lifting she applied several anti-aging serums and a custom face mask formulated to match my skin type. My favorite part of the facial? The therapist used a jade roller over the cold face mask — it was so refreshing and energizing!

There’s a treatment to suit every need on The Peninsula Spa’s menu, with 12 different facials, Ayurveda aromatherapy, body treatments and eight massages. The treatments include techniques and practices from around the globe, like the Thai Table Ceremony, and some are broken out on the spa menu by the type of products used, allowing spa-goers to easily find their favorites. Spa packages, hair and nail therapies and fitness classes round out the offerings.

With my visit on the cusp of awards season, my mind wandered, wondering which celebrities would soon visit the spa to get glam. With its new design, its luxurious treatments, its welcoming staff and its 5-star facility, I’d say The Peninsula Spa at The Peninsula Beverly Hills is already red-carpet ready.