THE DALLAS-FORT WORTH METROPLEX, an area spanning roughly 9,200 square miles, draws corporations like a magnet. Twenty-four Fortune 500 companies, including ExxonMobil and AT&T, have corporate headquarters in the region, along with powerhouses like 7-Eleven, Frito-Lay, Topgolf, Pizza Hut, Six Flags and Match.com, to name a few. Even more are on the way.

As senior vice president of economic development and international engagement for the Dallas Regional Chamber, Sarah Carabias-Rush understands the draw. She believes that while there are many factors, the No. 1 reason remains talent.

Location doesn’t hurt, either. In fact, Carabias-Rush traces the influx of corporate headquarters to 1974, when Dallas/Fort Worth International Airport opened for commercial service. Business travelers could fly anywhere in the country from Dallas in just a few hours at that point as well as direct to major cities around the world.

Perhaps the biggest draw in recent years, though, is the state’s business- friendly environment. Texas boasts fewer business regulations than most states, lower labor costs and no state income tax — considerations that prompted more than 150 corporations to move their headquarters to the Dallas-Fort Worth area since 2010, according to Carabias-Rush.

With the corporations come jobs. In 2017, when Toyota Motor North America relocated from Torrance, California, to the Dallas area, it brought with it 4,000 jobs. Some employees transferred from California to Texas, but many were new hires already living in the area.

The trend doesn’t show signs of ending anytime soon. In 2022 PGA of America will leave Palm Beach for Frisco, bringing with it a new hotel, convention center, two PGA Championships, two KPMG Women’s PGA Championships and even more jobs. And believe it or not, finding workers to fill these jobs proves one of the biggest challenges the Dallas-Fort Worth area faces.

Despite the fact that 82 percent of those born in the Lone Star State never permanently leave, existing residents alone can’t fill the steady influx of jobs. As a result, Texas depends on domestic migration, people moving into the state from one of the other 49 (or the District of Columbia), to populate its workforce. Until recently, domestic migration steadily tracked up, especially during the Great Recession.

However, as the U.S. economy improved, so have state economies. By the mid-2010s, workers could find employment in their home states and no longer needed to relocate to Texas for jobs. The state saw its annual domestic migration drop from an average of 123,000 immediately following the Great Recession to 82,500 in 2018 and an estimated 90,500 this year, according to a 2018 report issued by the Federal Reserve Bank of Dallas.

Fewer domestic migrants entering the labor market isn’t the only issue Texas — and by extension Dallas-Fort Worth — must tackle. As the state’s workforce ages, the Federal Reserve report estimates 20 percent of Texas’ population will be at least 65 by 2050. As older workers retire, the state will need younger ones to replace them.

Carabias-Rush says educating today’s students to step into professional and high-tech jobs vacated by retirees provides one of the keys to addressing the problem, but the Dallas-Fort Worth area isn’t waiting for them to graduate. The area launched “Say Yes to Dallas” in 2017 to attract millennials, a successful campaign so far.

Assuming corporations continue to relocate their head- quarters to the area and domestic migration holds steady, the region’s population will continue to grow. Forecasters estimate by 2030 the Dallas-Fort Worth area will become the third-largest metropolitan area in the United States, with more than 10.5 million residents. That will usher in its own set of challenges. 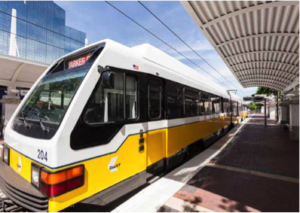 Already a concern: transportation infrastructure. In addition to improving its freeway system and adding to the Dallas Area Rapid Transit, the area looks at other options such as Uber Elevate, which will begin operating electric “flying taxis” in Dallas in 2023. A high-speed rail connecting Dallas to Houston and a hyperloop connecting Dallas, Austin, Houston, San Antonio and Laredo are in the works, too.

Growth could also jeopardize the Dallas-Fort Worth area’s affordability. Historically one of the most affordable metropolitan areas in the country, with housing costs 70 percent lower than San Francisco, demand for housing, goods and services could force prices for all to increase. While this concerns some people, the quality of life residents enjoy — including a restaurant scene that prompted Bon Appétit to name Dallas its Restaurant City of the Year — should, at least partially, balance it out.

“I tell people Dallas is a great place to visit,” says Zane Harrington, communications specialist, Visit Dallas. “But it’s an even better place to live.”

SCENIC DRIVES
Escape the corporate world of the Dallas-Fort Worth area by heading southwest on U.S. Highway 67 toward Glen Rose, an hour and a half from downtown Dallas. Along the way you’ll see wide, grassy landscapes and pass Lake Cleburne. If you have the time, take a safari tour through the 1,700-acre Fossil Rim Wildlife Center, an animal conservation center with lions, rhinos and other African animals. Or walk in the tracks left behind by dinosaurs in the bed of the Paluxy River at Dinosaur Valley State Park before returning to the Dallas-Fort Worth area.

During the month of April, take Interstate 45 south from Dallas to Ennis and pick up a map of the official Texas Bluebonnet Trail. The trail itself changes every year based on where the bluebonnets bloom, but whatever the route, you’ll be wowed by green fields bursting with pops of blue, red and lavender. Bluebonnets typically peak around the third week of April, according to the Ennis Garden Club, so if seeing the wildflowers is a priority, go then. Any other time of the year, make the 35-mile drive from Dallas to see the horses, rolling hills and lakes on the country roads surrounding Ennis.