CRUISE LINES HAVE LONG SOUGHT to bring the pleasures and perks of land-based luxury resorts to passengers at sea. Golf is no exception. Golfers today can get in a round even on board, thanks to the development of sophisticated golf simulators. These high-tech, compact games — employing clubs, balls, tees and computerized projection screens — first appeared in 1997 on Princess Cruises, and they have proliferated. So have netted driving ranges, putting greens and teaching pros at hand to fine-tune a passenger’s swing. For those seeking play on real fairways, some cruise lines now make it easy to book tee times at selected ports of call, while others offer the ultimate golfer’s sailing: a golf-themed cruise.

Unlike a vacation at a golf resort, a golf cruise sweeps from port to port, shuttling its guests from sea to tee at a number of widely separated world-class courses. There’s no need to change accommodations along the way. A golf cruise also addresses the complaints of the golf widow (or widower) by enabling a non-golfing spouse to enjoy all the options of a normal sailing, including exotic ports and shore excursions.

Another agency, Kalos Golf, administers 15 golf cruises in 2018, including a South Africa cruise Jan. 4–18 on Crystal Cruises’ Crystal Symphony, a Bordeaux golf and wine cruise on AmaWaterways May 16–27, and a Pacific Northwest cruise on Silversea Cruises’ Silver Explorer Sept. 5–15. 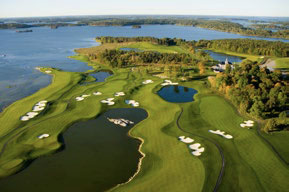 Perhaps the cruise line most dedicated to golfers, Azamara Club Cruises, teamed up with PerryGolf for six special cruises in 2018, with itineraries in New Zealand/Australia, the Iberian Peninsula, the French Riviera, the Baltic Sea, the Arabian Gulf and the United Kingdom (which includes attendance at the final round of the 147th British Open). PerryGolf oversees all aspects of Azamara’s golf cruises, from daily pairings and caddies to handling of each participant’s clubs. PerryGolf also arranges golf cruises on SeaDream Yacht Club’s two mega-yachts in the Caribbean and the French Riviera.

Golf cruises are especially popular with small groups and are often given as gifts for anniversaries and birthdays. For couples split between a desire to tour the world by sea and golf the world’s great courses in luxury, a golf cruise can be the perfect unifier.