Nighttime in Seoul is as exciting as the daytime. Luminescent lighting throughout the city with high-rise office buildings, countless apartment buildings, exterior advertisement billboards, lampposts and vehicles light up this metropolitan city like it’s another type of daytime. Explore night activities that will enrich your trip with exotic experiences at the markets open late or aim to have most relaxing, yet joyful night at the park. Recharge your energy for refreshing days forward. 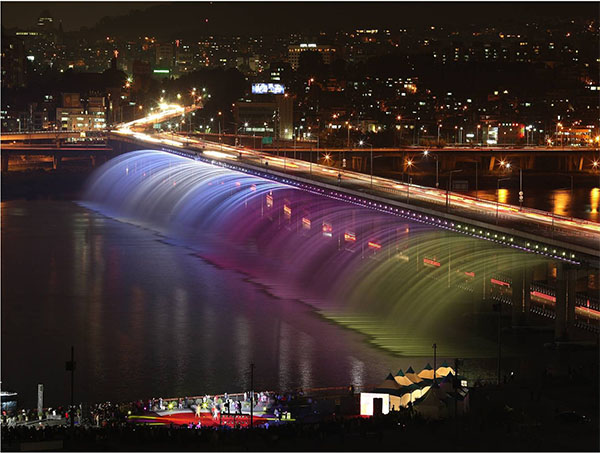 Here are three options to mix up for the best night ever. 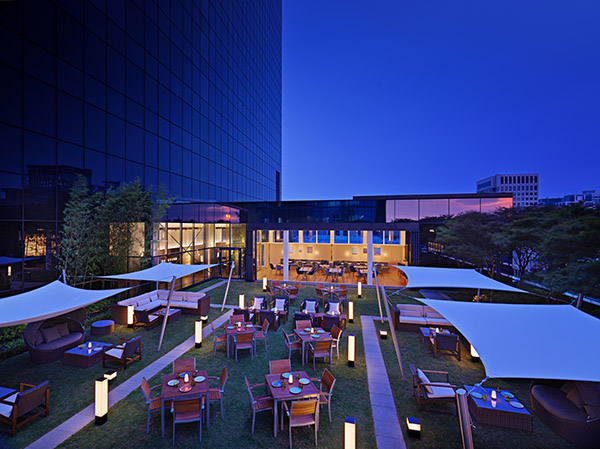 Dongdaemun Design Plaza
Reminiscent of a UFO that settled in the city center, DDP is a complex cultural space designed by famous architect Zaha Hadid that emerged as a new landmark in Seoul since its opening in 2014. Featuring international conference halls, museums and parks, select shops and other cultural facilities, DDP is also a popular venue for a variety of exhibitions, fashion shows, launches, conferences and other cultural events. It is particularly stunning during the year end and New Year holidays when the DDP Light Festival canvasses the entire façade of the curved building to create a media spectacle that blends light, video and music. The dynamic light show, with its overwhelming scale, provides a spectacular night view that cannot really be seen anywhere else.

Naksan Park
Naksan Park always ranks within the top three for sunset and night view spots in Seoul. Hanyangdoseong, the Fortress Wall of Seoul built during the Joseon Dynasty, still remains in the park. At night, the wall is illuminated with subtle lighting, creating an exotic, romantic atmosphere. An hour-long stroll along the fortress will bring you to the observatory, where a panoramic view of the city from the top of the old fortifications leaves you feeling as if you are looking at the present-day world in a scene from the past. With stylish cafés nearby, Naksan Park is one of the most sought-after places for couples.

Ikseon-dong Hanok Street
Located in Jongno-gu, the heart of Seoul, Ikseon-dong is the oldest hanok (traditional Korean housing) village in Seoul with high concentrations of these beautiful buildings. After the area was excluded from an urban redevelopment project in 2014, young entrepreneurs moved in and renovated century-old hanok into stores, pubs, cafés and restaurants. With alleys too narrow for cars to pass through, the walkways wind like a maze, making for great fun as you stroll around and discover hidden gems. Featuring impressive, time-honored hanok enclosed by high-rise buildings, Ikseon-dong Hanok Street will please any generation, from young people curious about “retro” styles to older people feeling nostalgic about the past. Visitors can also join the free “Jongno-gu Alleyway Commentary Program” to explore the diverse alleys scattered in Jongno-gu with a commentator.

Noryangjin Fisheries Wholesale Market
Having a sleepless night in the city? Why not go out for a walk by the “sea” in the heart of Seoul? Noryangjin Fisheries Wholesale Market is a place you can go to try fresh seafood shipped directly from all over the country, without breaking your wallet. This traditional fish market, around since the 1970s, has recently been renovated into a spacious new building and emerged as a popular tourist destination. Order some fresh raw fish, a king crab or other seafood for take-out, or have it with alcohol and spicy fish stew in a restaurant after paying for a table setting and your purchase to be cooked.

Seoul Bamdokkaebi Night Market
Night markets are great places where Seoul comes alive more as the night gets deeper. The Seoul Bamdokkaebi Night Market is open in Yeouido, Banpo, Dongdaemun and Cheonggyecheon, every weekend spring until autumn. Business travelers on a tight schedule can enjoy the night view, food and culture of the city all at once. Visit a food truck for a taste of Korean, Japanese, Chinese and other Asian food as well as a variety of foods that span Europe and South America, and shop for handmade soaps, accessories, candles and other unique items. Feel the freedom of losing track of time while immersed in shopping and eating. Sometimes the night market hosts music concerts, magic shows and performances, so there’s always something to see. Visit the website listed below for specific hours of operation and program schedules, which differ for each night market.

Rooftop Bars
Want to enjoy the romance and relaxation of the night rather than hurrying around? Why not make your way up to a fashionable rooftop bar, full of atmosphere. Such places can be found at most famous hotels in downtown Seoul. Places of note include Conrad’s Vertigo, where you can feel the greatness of the so-called “building forest” formed by the skyscrapers of Yeouido; Le Style at ibis Styles Ambassador Seoul Myeongdong with its staggering view of Myeongdong’s skyline and Namsan; and Floating at L7 Myeongdong by LOTTE. A cocktail to enjoy with the cool breeze and the city’s night view will help you let go of the day’s fatigue.

Sinsa-dong Garosu-gil
Extending from Hyundai High School to the Hangang River, Garosu-gil in Sinsa-dong is adorned with 160 ginkgo trees, as suggested by its name, Garosu-gil, which means “tree-lined street.” Garosu-gil is particularly dazzling in autumn when the ginkgo tree leaves turn a luminous gold-yellow and fall to the ground. Catch a glimpse of the latest trends in Korea while shopping at designer boutiques and flagship stores of global clothing brands. The alleys on either side of Garosu-gil are collectively called Serosu-gil, and are lined with brunch cafés and stylish restaurants suitable for business meetings.

Banpo Hangang Park
Come take in the night in all its splendor at Banpo Hangang Park, with its festival-like atmosphere after any ordinary day. Come be impressed by the dazzling changing colors that illuminate the Moonlight Rainbow Fountain of Banpo Bridge and Sebitseom, a complex cultural space. The Moonlight Rainbow Fountain, listed in Guinness World Records as the world’s longest bridge fountain, creates waves of more than 100 different shapes during the day and dances to music at night, lit up as it is with 200 lights in rainbow colors. Up for a romantic adventure on the Hangang River? Rent a tubester, a round tube motorboat, or a yacht and set sail. In addition to renting out yachts and boats, Golden Blue Marina runs a variety of aquatic and leisure programs, including a sunset tour, where passengers can take in the beauty of a sunset on board, and a Moonlight Rainbow Fountain tour, which takes you right up to its namesake to take it all in.

Make this Itinerary Yours