Kerala proves a perfect place to recover from the frenzy of Mumbai, India’s financial and movie capital. This coconut palm-choked tropical state on India’s southwest tip — whose name means “land of coconuts” — brims with backwaters, misty mountains, tea and spice plantations, golden-sand beaches, wildlife sanctuaries and rice paddies. That’s not all: Authentic traditions like Kathakali dance, Theyyam trance rituals, Ayurveda and some of India’s most colorful festivals abound in a fascinating amalgam of varied cultures.

Unlike the rest of India, here Christians comprise a significant minority (19 percent of Kerala), from Catholics to Syrian Christians, who believe the apostle St. Thomas converted their ancestors in the first century (a shock to Portuguese conquerors, who found Christianity had arrived more than 1,000 years earlier). About 56 percent are Hindu, and 25 percent are Muslim. One of India’s most progressive states, with a literacy rate exceeding 95 percent and a life expectancy better than the national average, Kerala formed in 1956 by combining the states of Kochi, Malabar and Travancore.

Kochi (called Cochin in the colonial era), the state’s second-biggest city, boasts the ultimate fusion thanks to its importance as a seaport in the spice trade for pepper (called “black gold”), cardamom, turmeric, ginger and cloves. The iconic photo of Kochi shows Chinese fishing nets, huge cantilevered nets silhouetted against the sky in Fort Cochin, the oldest part of Kochi, a throwback to 15th-century Chinese traders but found statewide. India’s oldest European-built church, St. Francis Church of 1503, marks the original burial site of Vasco da Gama, who discovered the sea route to India for Portugal in 1498, landing in Kerala.

The Dutch Palace, actually built by the Portuguese in the 16th century but renovated by the Dutch when they took over a century later, boasts well-preserved murals depicting tales from Hindu epics like the Ramayana in Mattancherry, a historic district crammed with antiques, spice and collectibles shops a half-hour walk from Fort Cochin. India’s oldest synagogue, the 16th-century Paradesi Synagogue, lies nearby in the district known as Jew Town, though today only a few Jews remain. The synagogue features a floor adorned by 1,000 hand-painted blue and white tiles from Canton, China, and paintings that tell the history of Jews in Kerala, who were granted religious tolerance by local rulers.

Food formed the highlight of my Kerala visit, different from the North Indian food at most Indian restaurants in the United States. Kerala cuisine is rich in all forms of coconut (milk, grated, roasted), tart-sweet tamarind paste and seafood from shrimp and fish to soft-shell crab. Then there are the pancakes: dosa, fat, rolled crêpes often stuffed with curried potatoes and onions; palappam, lacy-thin rice flour coconut milk pancakes; and uttapam, thick rice pancakes stuffed with green chilies, grated coconut and onions. At a cooking class at the home of cooking teacher Nimmy Paul, who gives classes to tour operator clients plus demos for the Culinary Institute of America in Napa Valley, I learned to make yummy specialties like meen molee, fish curry in coconut milk liberally spiced with cinnamon, cloves and ginger; and pachakari thoran, a vegetable stir-fry with grated coconut, shallots and curry leaves (unrelated to curry powder).

In Mattancherry, Ginger House, a waterfront restaurant at the back of an amazing antiques warehouse crammed with marble tables inset with precious stones, carved wooden furnishings, objets d’art and a huge snakeboat — the type that up to 100 men row in races — riveted me. Everything in the museum-like restaurant and warehouse is for sale. 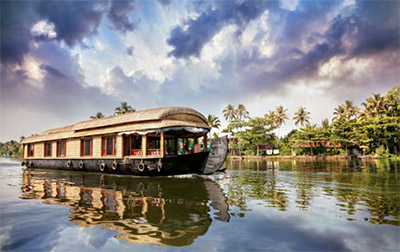 Don’t miss a key Kerala experience, a languid houseboat cruise of the backwaters — linked rivers, lagoons and lakes lined with coconut palms and tiny villages. You’ll have your pick of more than 1,000 houseboats in Alappuzha (Alleppey), an hour’s drive south of Kochi. Choose luxury or rustic, motorized or eco-friendly, air-conditioned or not, overnight or multiday cruises for a couple or small group. An onboard chef prepares fresh Kerala seafood. Many houseboats resemble a kettuvalam, a wooden thatched-roof barge locals use to transport coconut products and rice. For a half-day or full-day cruise you can also book a group tourist boat from Alappuzha to Kollam (Quilon), farther south.

Some of the world’s highest tea and spice plantations abound in the gorgeous hill country outside Munnar, east of Kochi. “Nowhere in India offers such dramatic scenery in tea country, and many properties offer amazing views, great food and service, as well as plantation walks and treks from their doorstep,” says Niall Causer, India specialist, Audley Travel, which customizes luxury travel based on guests’ interests. One he recommends is Spice Tree, a luxury boutique hotel whose suites offer mountain views and Jacuzzis or private pools.

Audley took a couple whose priority was rare wildlife to see the mountain goats called Nilgiri tahr in Eravikulam National Park near Munnar, timing their visit to see newborn goats, and to the Thattekad Bird Sanctuary, where visitors can view more than 150 species in one day. For a couple who craved a balance of luxury and local culture, Audley arranged a three-day luxury backwaters cruise plus two home stays near Munnar to explore the countryside in Kodikulam and take part in tea tastings. One home stay took place on a rubber and spice plantation; another featured five traditionally furnished cottages with a 50-acre farm on an island accessible only by boat.

For more wildlife, Wayanad Wildlife Sanctuary in pristine north Kerala, which sees far fewer tourists, proves an excellent place to see wild elephants by Jeep safari. Periyar Wildlife Sanctuary, South India’s most popular wildlife park, offers guided jungle treks and overnight hikes to see elephants, bison, deer and (rarely) tigers and, for a much tamer experience, a lake cruise. To spot tigers, your best bet is Nagarhole National Park on the border of north Kerala and Karnataka state, where it’s technically located. “It’s the only park in South India where you have any real chance of seeing a tiger, and also [it] has a healthy leopard population, so we use it regularly for Kerala trips,” adds Causer.

In contrast, Mumbai, India’s biggest city, offers extremes. The world’s most expensive and biggest home, a 27-story skyscraper whose family owners have an estimated $20 billion fortune, and one of Asia’s biggest slums, Dharavi (the setting of Slumdog Millionaire), co-exist here. You’ll also find Mani Bhavan, where Mahatma Gandhi stayed in the city, and haunts of Bollywood stars, the world’s biggest movie industry. Architecture ranges from Hindu cave temples on Elephanta Island to ornate Victorian Gothic at the Chhatrapati Shivaji train station to Art Deco buildings on the Marine Drive promenade along the Arabian Sea.

For sensory overload, experience Mumbai’s bazaars: antiques at Chor Bazaar; gold at Zaveri Bazaar; fabrics at Mangaldas; and Crawford Market, the city’s biggest for fresh produce, housewares and almost everything else. But if Mumbai seems chaotic, consider this: More than 350,000 home-cooked lunches are picked up and delivered daily to workers’ offices by thousands of dabbawallas. The lunch boxes are returned to the worker’s homes as the work day ends in a super-efficient system, without computers or cellphones, studied by Harvard Business School and given a 99.99 percent success rate by Forbes.

Kochi (COK) is a two-hour flight from Mumbai’s Chhatrapati Shivaji International Airport (BOM). Munnar hill country lies a 4.5- to 5-hour drive east of Kochi. Auto-rickshaws and pre-paid taxis from airports offer the best modes for getting around.