I spent much of the last two weeks soaking in the last few games of the National Pro Fastpitch season in Rosemont. In addition to enjoying the action from the stands, I also had some fun on the field. 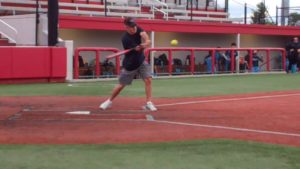 Prior to one of the games, I joined the Chicago Bandits for a round of batting practice. For a long-time softball player and Bandits fan, this was about as cool as it gets. The players gave me a little cheer as I stepped into the batter’s box with regular catcher Kristyn Sandberg as the pitcher.

Even at half speed (35 mph) from 30 feet, the pitches came in quickly, and I had trouble keeping up. I managed to hit a few nice shots, but my dream of launching one over the fence was not realized. Still, it was a fantastic experience, thanks to Director of Game Day Operations Jourdan Skirha.

A couple games later, multimedal-winning Olympian Jennie Finch held a clinic, and I talked to her about softball returning for the 2020 Olympics and travel. Her legendary career took her all over the world, but she still lists Chicago as a favorite city to visit.

The Bandits finished the season in second place and faced the first-place USSSA Pride in the championship series, played at the Parkway Bank Sports Complex, the Bandits’ home field.

The championship series weekend started with a big tailgate party. I met Rawlings NPF Gold Glove winner Jada Rhodes. She is the third NPF player to win the award, a big step for the league and women’s sports in general.

Unfortunately, the Pride beat the Bandits to become the 2018 NPF champs. The Bandits played well but came up a bit short. It was a tight, exciting series, and both teams should be proud. 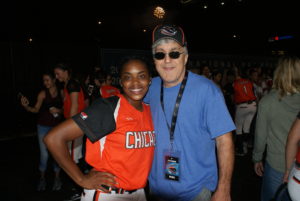 Although the Bandits did not win the NPF championship, they had a very successful season. Several Bandits received individual awards, including NPF Player of the Year Brenna Moss and NPF Rookie of the Year Jessie Scroggins.

I really enjoyed following the Bandits and the NPF over the last few seasons. Despite some growing pains, the NPF continues to put out a fantastic and underappreciated product. The addition of international teams helped bolster the league and attract worldwide fans.

In an era of big salaries and large egos, it is refreshing to see these young, dedicated, passionate athletes who want nothing more than to play the game and grow the sport. Every game, I see young girls waiting to meet the players, hoping that they will one day wear a pro uniform. 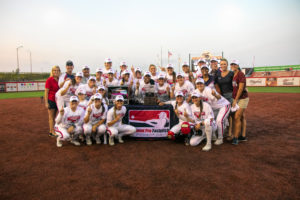 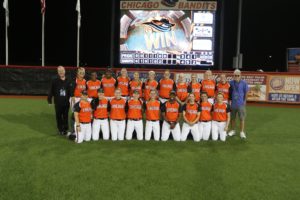 I already miss the softball action, and I look forward to next season. I thank GM Toni Calmeyn, Director of Media Relations Jason Lowenthal and the Bandits organization for their hospitality.

The holidays are right around the corner and it's time to start thinking about gifts for your wine-loving friends. If you or someone you know is planning an upcoming trip to a wine region, check out Argaux. The all-women-operated and -owned online wine shop and educational platform offers a series of tasting sets to celebrate and introduce some of the best wine destinations. The Gaux-To Tasting Sets are perfect for travelers to experience the wine before they travel — or without having to travel.

The Red Sea Development Company recently finalized its utilities deal with a consortium led by ACWA Power for The Red Sea Project, setting the development as the largest tourism project in the world set to be powered solely by renewable energy.

Uniworld Boutique River Cruises offers the chance to get up to $5,000 off per person on a 2022 sailing if booked by Nov. 30 as part of a Black Friday deal. This offer is valid on bookings made through Nov. 30 on cruises in 2022. Additionally, this deal can be combined with any publicly available promotion and standard River Heritage Club membership savings or benefits.

Peru-based hotel brand Inkaterra was named the first-ever “climate-positive” hotel brand in the world by GreenInitiative. Climate-positive can be defined as “any activity that furthers the achievement of net zero carbon emissions, providing an environmental benefit by removing additional carbon dioxide from the atmosphere.” Endorsed by the United Nations, GreenInitiative announced Inkaterra Hotels’ achievement upon measuring the company’s carbon footprint and offset.

Premiere luxury resort L’Auberge de Sedona debuts the Home for the Holidays experience to go with the resort’s holiday celebrations. Guests are invited to join in the festivities this year amid Arizona’s beautiful natural features like Oak Creek and Red Rocks.