The Road to the Women’s College World Series

I spent much of the last couple weeks watching women’s collegiate softball. Despite the inclement weather, I enjoyed watching my two favorite teams on the road to the Women’s College World Series.

DePaul beat Villanova to win the Big East tournament. Played at Rosemont Stadium, home of the Chicago Bandits, the game featured DePaul scoring eight runs in the sixth inning to cap a thrilling comeback win that gave DePaul a berth in the NCAA Softball Championship Tournament. A few days later, DePaul hosted a big send-off for the team as they headed to Michigan for the Regional. Unfortunately, a loss to James Madison University ended DePaul’s season. DePaul coach Tracie Adix-Zins did an outstanding job in her first season, and the future looks bright for the Blue Demons.

Northwestern University also earned a spot in the Championship Tournament by virtue of a top 20 ranking. The Wildcats played in a Regional held at their home field in Evanston. Unfortunately, the weather was wet and cold all weekend, but Northwestern had big screens showing the game inside of Welsh-Ryan Arena next to the field. After waiting out several rain delays on Sunday, Northwestern beat Louisville twice to advance to the next round of the tournament. 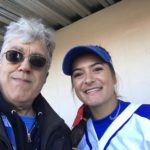 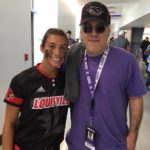 While I love watching the games, the real memories I took away involved the players and their families, most of whom I have gotten to know through game day activities. I saw the pride, love and raw emotion all season. I witnessed the sacrifice the families make and the rewards all have, win or lose. It was thrilling and heartwarming to be part of it.

Many members of the collegiate softball community thanked me for giving some exposure to the young athletes and the sport. I thank them for allowing me into their community.