The Chattanooga Metropolitan Airport, also known as Lovell Field, is about to become the first airport to be 100 percent solar-powered. Installation of solar panels began this week, and the airport expects to get all of its power needs from the sun by early 2019.

Established in 1930, the Chattanooga Airport has a single concourse with five gates. It is categorized as a small-hub primary commercial service facility. The airport is the base for 89 aircraft and serves nearly half a million passengers yearly. 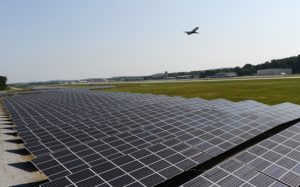 The move to be energy self-sufficient and carbon neutral was part of a three-phase project started in 2011. The solar farm, located in the southwest corner of the airport property, has storage units to provide power after sunset.

The system has a life expectancy of 30–40 years and is expected to pay for itself in less than 20 years, according to John Naylor, vice president of planning and development, Chattanooga Metropolitan Airport Authority. Naylor also stated representatives from about 50 airports have already sought out information about Chattanooga’s solar system.

Chattanooga has a history of blazing a technological trail. Nicknamed “Gig City,” Chattanooga claims to have the fastest internet service, stemming from its fiber optic network, copied by many other cities. While it will be a much larger project to make airports like LA’s LAX or Chicago’s O’Hare (ORD) solar powered, Chattanooga’s system serves as an example. Larger airports will need larger systems, but those systems will also yield proportionately bigger results.