A Night With Billy Joel

I don’t think anything will surpass watching the Chicago Cubs play in the World Series at Wrigley Field, but seeing Billy Joel perform there is a close second. I’ve seen him there three times, including this past Friday night. 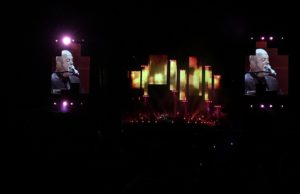 It was a near-perfect summer evening when “Miami 2017 (Seen the Lights Go Out on Broadway)” signaled the start of the show. “Pressure” followed, and a nostalgic two-hour romp through Joel’s discography was well underway.

Joel played up the Chicago crowd by belting out “Go Cubs Go.” The crowd roared its approval and sang along with the chorus. Continuing with the baseball theme, he had a few “fielder’s choices,” where the audience got to choose between two songs. While I appreciate the audience participation, choosing between any of his songs is always tough for me.

Paying homage to the Beatles on the 50th anniversary of the iconic Sgt. Pepper’s album, Joel performed a magical version of “A Day in the Life.” He later revisited the Beatles by breaking into “A Hard Day’s Night” in the middle of “The River of Dreams” and also performed an abbreviated version of Chicago’s “25 or 6 to 4.”

By the end of the 28-song night, I was emotionally spent. Joel’s music has spoken to me since the moment I heard “The Stranger” 40 years ago. Back then, I never dreamt I’d be sitting in the outfield at Wrigley as Joel strolled through 40 years of my favorites.

Joel has performed at Wrigley six times, and I will be there if he comes back for a seventh. Seeing him at his home stadium of Madison Square Garden is on my bucket list, but I will not miss any future visits of his at Wrigley.