Out of all the things to love about this newish hotel just a block from one of South Florida’s most iconic beaches — and there are a lot, from stylish mid-century design elements to the niceties you can always expect from a stay at a Kimpton property — one stands out, and it happens 5–7 p.m. Happy hour at Botanic at the Goodland is the city’s best-kept secret. Want proof? Look no further than the bartenders mixing up potent potables whose discounted price belies their craftiness, or the in-the-know locals bellying up to the bar for elevated bites like seared tuna sliders, shrimp tacos and a Mexican street corn-inspired salad. The experience especially hits the spot after a flight and drive from FLL or a day in the sun and surf.

Kimpton Goodland Hotel Fort Lauderdale Beach opened in April 2021, in the former Escape Hotel. That property was built in 1950 by George Gill, Jr., a developer who became known as Broward County’s Father of Hospitality, and had the distinction of being the city’s first year-round resort and its first hotel with a swimming pool. The Escape Hotel closed in 1980, reopened as an assisted living facility, and was designated a Historical Landmark in 2004 before being purchased and repurposed a few years ago. Walking around the property you can definitely see shades of its past iterations, from the breezeways connecting all three buildings (named, in fact, after three of Gill, Jr.’s other properties: Jolly Roger, Trader and Clipper), to the bright white painted bricks and handrails, to the meticulously cared for landscaping. It’s classic Fort Lauderdale with touches of a whimsical modern vibe.

The hotel’s 96 guestrooms are located throughout the three two-story buildings: 56 king (including two junior suites), 14 double-double and 26 queen; 16 of the rooms are connecting. Design is minimalist yet not stark, with light wood floors, headboards, desks and other accents that evoke an almost Japanese sensibility. Fun elements in the room include a 1950s-inspired turquoise pull handle refrigerator, cork toadstool side table and a towel-filled tote bag to use during your stay, at the ready for pool or beach pursuits. Tiled bathrooms have showers and standalone sinks with shelves.

As with many beach resorts, there is a daily amenity fee, but it’s not terribly painful to fork over those extra dollars considering it includes daily yoga classes (you’ll find a rolled-up mat in your closet, like in all Kimpton locations), two beach chairs and bottled water at the beach, two bottles of water in the room per day, two-hour bike rental, use of boogie boards, kids’ beach toys, free upgraded WiFi throughout the property and a full-service pool area with towels.

Speaking of the poolscape, it’s so fun and glam in a retro way that even if you are a beach person you will find yourself drawn to the sunny courtyard for at least part of the day —and wishing you had packed a halter-neck one-piece swimsuit and cat’s eye sunglasses. Chaise lounge chairs are joined by two swinging egg chairs, a pillow-adorned hammock and couch and lounge seating. And then there’s the adjacent Good Bar, with its blue- and white-striped awning and its own menu of Tiki cocktails, G&Ts, Rosé all day and snacks. (It’s busiest 5–6 p.m. during Kimpton’s signature wine hour, when you can also sip a glass of complimentary white or red.) Currently only open for events, the hotel touts a rooftop pool, and while you can’t beat the views of the skyline and Intracoastal Waterway, I much preferred the tucked-away feeling of the one on the main level. They will also unveil a restaurant and bar concept on the rooftop in early 2022. 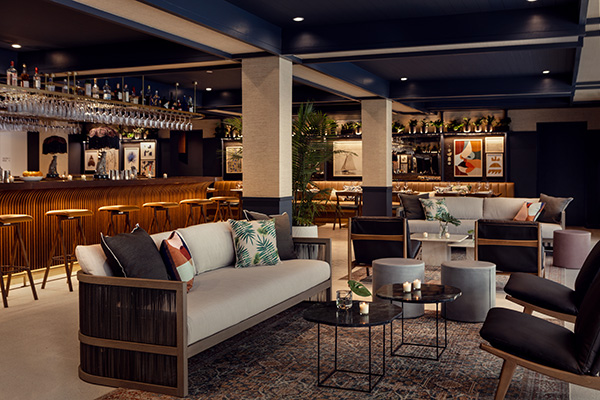 Botanic at the Goodland is the signature dining concept. Helmed by chef Tim Duque, it showcases American Regional cuisine featuring eclectic flavors and a timeless South Florida vibe and is open for breakfast and dinner. Make sure you are parked in one of the barstools for the aforementioned happy hour, where the $7 (!) cocktails include The Suz, with lip-tingling jalapeno tequila, lime, agave and salt; or the Botanic Tonic, with Bluecoat Gin, cucumber, lemon and Fever Tree Tonic. Another stand-out sip on the bar menu is Welcome to the 954, where bitter Campari meets its match with fresh grapefruit and lime, while an egg white adds froth and silky mouthfeel. For dinner, start with yellowtail ceviche, which gets a Peruvian/Asian treatment with leche de tigre, sesame, onion and corn. On the entree side, red snapper is served with a fragrant coconut lemongrass broth, zucchini noodles, sweet potato and grilled pineapple, while tender pappardelle noodles are topped with spicy pork meatballs, kale and tomato sauce and flecked with garlic-herb breadcrumbs. You can’t vacay in South Florida without Key Lime pie or some variation using the local green citrus fruit; here it’s presented as a crème brûlée, with Chantilly cream and a graham cracker streusel.

Even the post-dinner walk back to your room is a trip, as you will come upon a stone-filled pond with plastic pink flamingos posed to take a drink, a Zen rock garden flanked by towering bamboo plants and a circle of bright yellow canvas sling chairs. They are whimsical details that come across just as playful as the rest of the touches in this gem of a boutique hotel.

Andaz 5th Avenue and Fellow Barber announced a new partnership, starting in December 2021. Andaz 5th Avenue will be the first hotel to carry Fellow’s unisex line of expertly crafted products in all guestrooms and suites. The hotel will also launch a pop-up barbershop Dec. 16–23, in its street-level artist-in-residence space to give frontline workers complimentary cuts from skilled Fellow barbers. Reserve a haircut here; those unable to claim one of the coveted spots can secure a wooden nickel at the hotel, which can be redeemed at any Fellow Barber location.

Coco Collection properties in the Maldives offer couples a unique deal. The Missed Moments pffer gives couples the opportunity to celebrate an engagement, honeymoon, birthday or other milestone missed due to COVID-19.