As a ’tween in the 1990s, I remember desperately wanting to eat at Planet Hollywood to see all the pop culture memorabilia on display and maybe catch a glimpse of a celebrity. The entire concept seemed so cool to me, and I have vivid memories of my mom, grandmother, cousin and me waiting in line for a table at the Planet Hollywood in Orlando, Florida. I smiled to myself to see a bit of that nostalgic restaurant will be on permanent display in Las Vegas.

The Neon Museum in Las Vegas 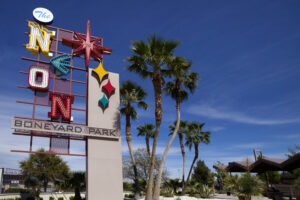 recently acquired the restaurant sign that originally rotated upon an iconic column pedestal in front of Caesars Palace Forum Shops and Colosseum.

The sign, originally installed in 1994, is made from a variety of materials, including neon, incandescent lightbulbs, metal and fiberglass. 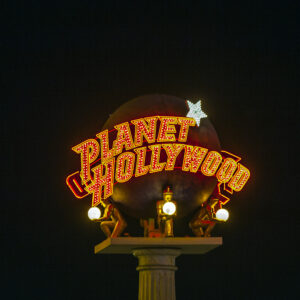 The core metal structure weighs 12,000 pounds, and the fiberglass globe is about 25 feet in diameter. To make the move to the museum, the globe was dissected into four pieces that weigh 1,300 pounds each. 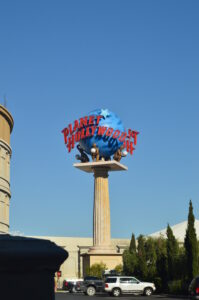 The Las Vegas outpost of Planet Hollywood Restaurant opened in 1994, three years after the original New York location. The restaurant chain was best known for movie and television memorabilia and was owned by Sylvester Stallone, Bruce Willis, Demi Moore and Arnold Schwarzenegger. The Las Vegas restaurant was the 14th to debut, and today seven remain.