Linda Eder at North Shore Center for the Performing Arts

Photo courtesy of North Shore Center for the Performing Arts.

I recently saw Linda Eder perform at North Shore Center for the Performing Arts in Skokie. It has been a few years since I last went there, and I forgot just how great the venue is.

Designed by Boston-based architect/developer Graham Gundand, it opened in November 1996. The facility has an 867-seat main stage theater and a convertible 318-seat theater within 68,000 square feet of space.

The Grand Lobby is highlighted by lighted sculptures created by artist Michael Gard. The first indoor installation by the Village of Skokie’s Public Arts Advisory Committee, the sculptures commemorate the 20th anniversary of the Center. 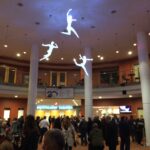 Singer and actress Eder is known for ballads and standards, although her 2008 CD The Other Side of Me is more pop/country. She has performed on Broadway, at Carnegie Hall and at Radio City Musical Hall. She had an unprecedented 12-week win streak during the 1987 season of Star Search. Eder has released 20 albums.

Photo courtesy of North Shore Center for the Performing Arts.

Eder delighted the audience with a mix of her songs. I love Eder’s rendition of  “Broken Vow,” originally written and recorded by Lara Fabian in 1999. A powerful and moving ballad, it has been covered by several other artists, but none better than Eder.

We had such a great time, we already circled future dates for The Rocket Man Show, vocalist Storm Large and comedian Steven Wright.