There is a growing contingent who feels apples should replace pumpkins as the fall favorite. The Lincoln Square Ravenswood Apple Fest presents a compelling argument.

Presented by Lincoln Square Ravenswood Chamber of Commerce, Apple Fest is in its 34th year. Dozens of vendors lined a several-block stretch on the north side of Chicago, selling everything imaginable involving apples, including delicious and interesting food items.

Gayle V’s Best Ever Grilled Cheese lived up to its billing with the Abreo, featuring white cheddar cheese, bacon, onion jam and Honeycrisp apple slices. The Abreo is a seasonal offering added to the usual menu, already stacked with several grilled cheese sandwich options. I am slowly working my way through all of the delicious grilled cheese sandwiches on the menu.

Cobblestone Restaurant offered loaded apple potato soup, with smoked apple bacon, cheddar cheese and chives. Thick and layered with flavors, it had the right degree of richness. The soup paired perfectly with the grilled cheese sandwich I got from Gayle V’s.

On the sweeter side, Jerry’s had spiced apple cider donuts and apple cheddar scones. They also had smoked chicken apple sausages, which I took home for later. On a side note, Jerry’s restaurant menu has a fantastic fried shiitake buttermilk biscuit with fresh mozzarella, avocado and fried egg, among many awesome sandwiches. 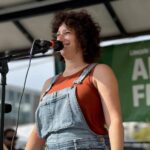 After a day ensconced in apple goodness, I admit the apple lobbyists have a point. As a devout pumpkin enthusiast, I am not ready to see pumpkins replaced, but I’d be happy with both sharing the spotlight.