New York City Shows Off its New Attractions and Hotels

New York City never fails to impress with its vibrant array of attractions and hotels. And this year the Big Apple offers even more excitement, thanks to new developments in several popular neighborhoods in the heart of Manhattan. It’s no wonder NYC & Company — the city’s tourism office — expects an especially good year. 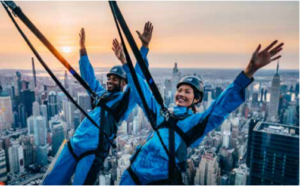 Among the most eye-catching new attractions, the city’s multiple observatories expanded with new features and experiences. Edge, which debuted at Hudson Yards in 2020 as the highest outdoor sky deck in the Western Hemisphere, recently opened City Climb, a “skycraping adventure” that challenges climbers to scale the outside of a building more than 1,200 feet above ground. In late 2021 New York City welcomed its fifth observatory, Summit One Vanderbilt, offering stunning city views from atop the tallest commercial skyscraper in Midtown Manhattan.

Photo-worthy views also draw visitors to another of the city’s newest attractions: Little Island, a public park built above the water in Hudson River Park. From here, take a quick stroll to the chic Meatpacking District, where the Whitney Museum of American Art celebrates the 80th edition of its Biennial event April 6– Sept. 5.

Fans of shopping, meanwhile, may consider a visit to Fifth Avenue this fall, when the flagship store of Tiffany & Co. reopens; the redesign includes a refreshed Blue Box Café that serves breakfast.

Multiple new luxury hotels also up the ante in Midtown Manhattan and nearby this year. The 83-room Aman New York will surely become a favored spot for upscale travelers looking to stay on legendary Fifth Avenue. Just a few steps away, the renovated Palm Court at The Plaza New York draws visitors with a new culinary menu and craft cocktails.

The chic neighborhood known as NoMad polished its upscale credentials, thanks in part to this year’s debut of two new luxury hotels. The 250-room The Ritz-Carlton New York, NoMad features a restaurant headed by Michelin-starred chef José Andrés and a spa. Slated to open in summer 2022, the 463-room Virgin Hotels New York will offer a new leisure concept called The Pool Club, a pool area furnished with cabanas, day beds and loungers.

Fragrant, soothing and filled with powerful antioxidants, tea is second only to water on the list of beverages consumed around the planet. If your vision of the perfect tea experience includes Japan as a setting, consider visiting the historic tea production region of Shizuoka. Yielding more than a third of all Japan’s tea, Shizuoka lies southwest of Tokyo and east of Nagoya (about an hour by train from either city).