Having lived many months of my life just 40 minutes outside of the city, I had heard of this beautiful property before and, despite not knowing that morning that my evening would be in one of its rooms instead of in London, I couldn’t complain. It was around 10 p.m. when I arrived at the hotel. To the left sat the bustling dining room, filled with people and live music. The hallway entrance featured tall ceilings and a grand crystal chandelier, evoking a classic and elegant ambiance that continued into the dining room. An archway led to the main staircase just before the front desk, and the marble floors exuded luxury.

As I waited at the front desk, I recognized a few other travelers who had also been scheduled to fly on the same canceled flight. As we patiently waited, the manager kindly welcomed us to the hotel. I could tell the staff was scrambling; however, as they were speaking to one another in a confused matter. Only a few minutes later they did confess they had not been informed by the airline of our arrival, but they were working to prepare our rooms. 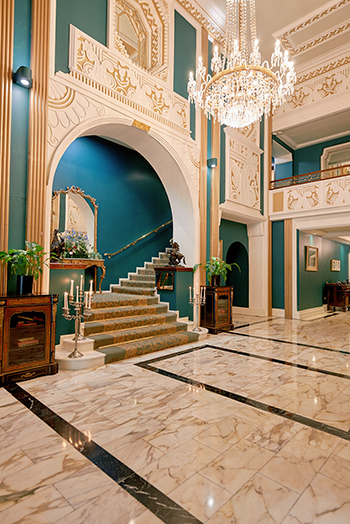 The staff invited us to sit in their guest lounge to rest with our luggage as we awaited more updates. Despite us coming in late with no warning from the airline, not once did the staff at Imperial Hotel and Spa make us feel like an inconvenience. Always treating us with the utmost kindness and respect, they came into the lounge and invited us to a lovely dinner in their dining room. I sat with three other women and we chatted and dined and each had a glass of wine. None of us knew each other, funnily enough, but as we talked over good food, we learned more about each other and our altered travel plans.

I had a lovely vegetable lasagna dish with chips, and two of the women ordered the lamb and couldn’t stop raving about it. The freshness of each dish was unparalleled, and our waiter visited us frequently to make sure we were alright. It seemed to me the staff’s seamless communication with one another and with us allowed for our upended day to turn into a wonderful evening at a luxury hotel.

My room was one of the first ones ready and, as they helped me to gather my things, the manager asked when my flight was the next morning. I was, at first, unsure why he wanted to know my flight details, but upon telling him of my 7 a.m. flight the next morning, he set to work scheduling a taxi for my airport pick-up. Without me even asking, he got my taxi in order and then proceeded to ask if I would like any coffee or food for the morning to send me off. After getting these details in order, I ventured up to my room. 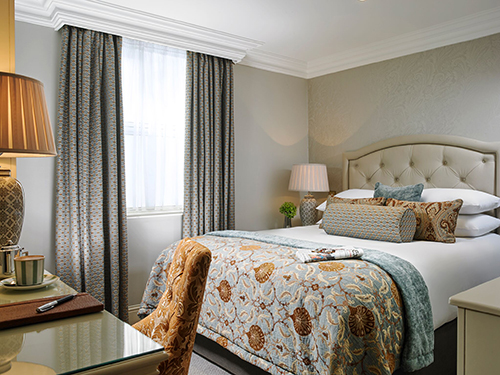 Not overly spacious, what it lacked in size it made up for in comfort and quality. The room evoked classic and traditional design, with nothing too gaudy or too plain. The bed offered a plethora of pillows to choose from, and the entire room featured calming greys adorned with bursts of oranges, blues and bronze. The noise level of a hotel is crucial for me when deciding where to stay, and, despite there being an event on the ground floor, I was none the wiser in the quietness of my room.

The bathroom was simple in design but elegantly done up, with black-and-white tiled flooring and plenty of counter space.

When I woke up before the sun the next morning, I headed downstairs and found the manager (the same one who had worked tirelessly late the previous night) awake and smiling. He saw and greeted me before making me some fresh coffee. He returned with a freshly brewed cup and a box of fresh pastries. As I walked out the door, the taxi awaited to finally take me to London … 14 hours later.

To say the service was above and beyond at Imperial Hotel & Spa is an understatement. They never made me feel like a burden, despite being thrown on them late at night with no warning. The desire to ensure my comfort was felt throughout my entire stay, and I hope to return again for an actual planned visit to experience this level of hospitality again. The staff truly set a high standard in the field of hospitality, and rarely have I encountered such a wonderful group of people in such a historic and elegant hotel.