FROM JEDDAH TO RIYADH, we make the 500-mile journey on a pristine highway heading inland from the coast, skirting Mecca, climbing the Rift Valley escarpment and then traversing the unrelieved, pale flatness of the Arabian Desert. The road has clear purpose: linking Saudi Arabia’s two most important cities. Less clear is the purpose of the bridges that straddle it at regular intervals. There are no roads or rail tracks across them. They are bridges from nowhere, to nowhere.

The mystery remains unsolved until we see one in use. The silhouettes crossing from one side to the other are unmistakable: camels. The desert is their domain, and the highway sliced it in two. High fences to prevent the camels’ straying into the path of speeding vehicles enforce the sides of the road. The bridges, surfaced in sand and stone, link the two halves of the camels’ range. The animals cross back and forth without regard to the traffic below.

On first impression, Saudi Arabia’s great leap into the modern world seems to be unrestricted by environmental concerns: vast oil fields, refineries, multilane highways, high-rise cities. But look closely and you’ll find green issues move increasingly to the fore, enshrined most starkly in a decree made in March 2014 by a government agency, the Presidency of Meteorology and Environmental Protection, compelling all companies to meet new standards for air, water and noise pollution by 2019.

Saudi Arabia is the world’s largest producer of oil, and for decades the resultant wealth enabled the kingdom to shape its infrastructure without thought to sustainability. But now, with oil revenue sharply down and reserves declining, the kingdom seeks to diversify its economy and to create a future much less dependent on fossil fuel.

Sustainability is a priority for all new projects, many overseen by the Saudi Green Building Forum, an NGO counting major local construction companies such as the Binladin Group and Saudi Aramco among its members.

The SGBF is a crucial advisor to the kingdom’s biggest megaproject, a $93 billion new-build city taking shape on the shores of the Red Sea 60 miles north of Jeddah. The King Abdullah Economic City was conceived with sustainability as a central aim and a layout designed to prioritize walking, cycling and the use of public transport and to discourage private vehicles. 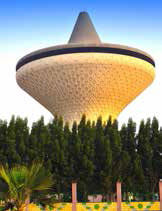 Remarkably for a country still economically dependent on the export of fossil fuel, and where gasoline is still just 24 cents a liter, the new city will rely largely on renewable energy sources, especially solar power, another natural commodity this desert land has in abundance. On the flip side, water is scarce, and the city is going to great lengths to ensure responsible use, both during construction and in future day-to-day life.

Elsewhere in the kingdom, both Riyadh and Jeddah are currently being retrofitted with state-of-the-art public transport systems. The Riyadh Metro, to boast 85 stations, is due to open in 2018 at an estimated cost of $22 billion. The $8.5 billion Jeddah Metro, with 17 stations, is expected to start operating in 2020.

The most ambitious rail project of all is the Saudi Landbridge, an upgrade of the existing rail network that will link the Red Sea to the Arabian Gulf, with capacity to transport 8 million tons of freight each year, cutting the transport time from five to seven days by sea to just 18 hours. 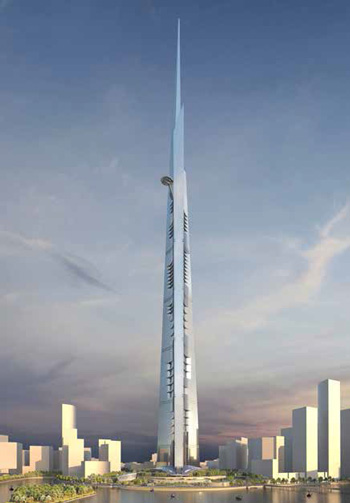 Of all the projects currently underway in Saudi Arabia, the one most likely to capture global attention is the 3,260-foot-tall Kingdom Tower in Jeddah which, upon completion in 2018, will be the world’s tallest building (Dubai’s Tower at Creek Harbour may regain the mantle when it tops out in 2020 — its ultimate height is still a guarded secret).

As with all other current Saudi megaprojects, the construction of Kingdom Tower supports efficiency and sustainability as key objectives, including low-conductivity glass to reduce the cost of keeping the interior cool during the ferociously hot summers.

For visitors, this highly conservative Islamic country can feel somewhat restrictive. LGBTQ travelers must necessarily keep a low profile (homosexuality is illegal). Women are not permitted to enter the country without their spouse, a male relative or a sponsor. All visitors are required to adhere to the conservative dress code. Alcohol is banned.

The Kingdom Tower, however, will be one of the few major buildings in the country that does not segregate men and women. It remains to be seen if it will stand as a symbol for a new direction in Saudi Arabia: more inclusive, more tolerant and more sustainable.

Things to do in Saudi Arabia

On a misty morning, wrapped up against the cold, we follow a trail through greenery. The fog burns off, revealing a breathtaking panorama of rugged mountains. Where are we? 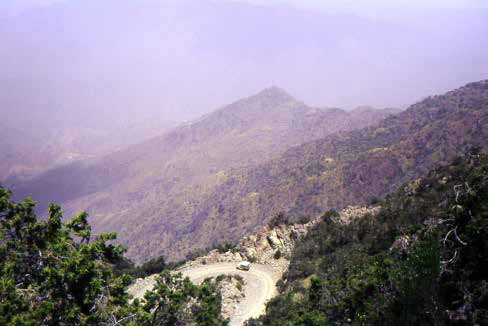 Entirely subverting our preconceptions, we’re in Saudi Arabia, close to the city of Abha, in Asir National Park. Covering an area of more than 600 square miles, this precipitous park on the Rift Valley escarpment protects more than 300 species of birds, hamadryas baboons (a particularly hairy species of monkey) and the elusive Arabian leopard. Rising to 9,000 feet above sea level, the high-altitude park offers respite from the cauldron heat of the Arabian Desert, and with its diverse vegetation provides a striking contrast to the barren dunes.

Asir is not the only surprise this kingdom has to offer. Here’s another: Within sight of the skyline of Jeddah, we keel off the side of a boat into an explosion of bubbles. When the water clears, we find ourselves drifting above a coral reef teeming with life. Here in the Red Sea, as in the mountains of Asir, the aridity of the Arabian Desert seems a world away.

At Mahazat as-Sayd Protected Area, immediately to the south of the Jeddah-to-Riyadh highway, our preconceptions are finally met. This is more like the Arabia we imagined: a flat expanse of stark desert, interspersed with clumps of brush and isolated thorn trees. Here we encounter vultures, lone gazelles, a running flock of top-heavy ostriches and our ultimate goal, one of the great natural symbols of the region: the Arabian oryx.

A herd of these magnificent, straight-horned antelopes clusters in tree shade, watching us warily. They were hunted to extinction in the 1960s and were only saved thanks to a captive breeding program coordinated by the San Diego Zoo. This reintroduced herd is a beacon of hope for Saudi Arabia’s wildlife.

Saudi Arabia does not offer a great deal of tourist infrastructure. Asir National Park is best visited on daytrips from Abha, while access to Mahazat as-Sayd requires a permit from the Saudi Wildlife Authority. Red Sea diving is much more developed, with several dive operators based in Jeddah and 200 miles up the coast at Yanbu. All provide glimpses of the kingdom’s surprising diversity. 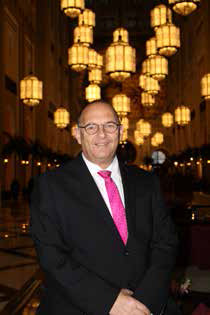 CHECKING IN WITH PAUL PAPANICOLAOU

How important are environmental considerations in the daily operations of Mövenpick Resort Al Nawras Jeddah?
Extremely important, especially given our location in the city built on an island. On a daily basis we collect, record and sort our waste and review our energy and water usage, recycling an average 2,000 kilos of waste per month. Being Green Globe-certified, our staff is fully aware of our targets, and all share in creating an environmentally focused resort. In addition, we are heavily involved in the community with various volunteer programs. 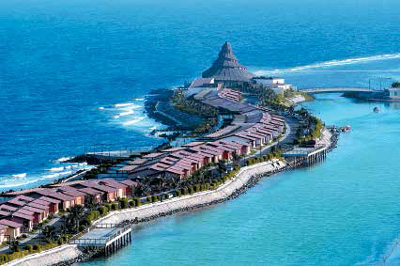 What cultural differences should Americans be aware of when visiting Saudi Arabia?
Saudi Arabian people are extremely hospitable and welcoming. If you can learn basic Arabic or the local greeting, you will find a different world can open up. Women should observe the Saudi dress code of wearing conservative, loose-fitting clothes including a full-length robe (abaya) and keep a scarf with them to cover their hair.

What are the key developments to look for in the future?
Currently there are many large construction projects for private enterprise and the government. In Jeddah we have the Corniche Development, which includes the Jeddah Eye (largest Ferris wheel in the world at about 780 feet), and we have the new airport, expected to open in 2017, including a new high-speed rail network to Mecca and Medina. We have the Kingdom Tower project, the tallest building in the world. In addition, we have construction at King Abdullah Economic City north of Jeddah, where they are building an entire city.

Which visitor attractions would you recommend?
Jeddah’s nickname, “Bride of the Red Sea,” is well-justified. You can enjoy some of the best snorkeling and scuba diving in the Red Sea. A visit to the Fakieh Aquarium provides something for all ages. Balad is the historic city center of Jeddah and a UNESCO World Heritage site. It is a great place to explore and find your own treasure in the many souks lining the streets.

OFFICIAL LANGUAGE
Arabic, though English is widely spoken in business.

COMING AND GOING
All U.S. citizens require a passport valid for at least six months beyond arrival and a confirmed round-trip airline ticket. A visa is also required and should be obtained three to four weeks prior to arrival. If your passport contains evidence of travel to Israel or family links to Israel, it is likely your visa application will be rejected. Female travelers require a chaperone (husband, male relative or sponsor).

Where to Stay in Saudi Arabia

ABHA PALACE HOTEL This luxury hotel located on the western side of the city of Abha is convenient for trips to Asir National Park. Nahran Road, Abha $$$

ASSALAM PALACE REVOLVING RESTAURANT The 10th-floor restaurant offers spectacular panoramas of the city and its surroundings, but the view is better than the food, so come for lunch rather than dinner. Assalam Palace Hotel, Al Imam Muhammad Ibn Saud Street, Abha $$$