TUCKED AWAY AT THE DISTANT tip of Mexico’s Baja Peninsula, barely accessible amid a dreamscape of towering rock soaring skyward from azure waters, a nondescript fishing village once toddled timidly through time. It doesn’t now. It’s not that the skyscraping formations crumbled or the fishermen abandoned the hypnotizing seas — they’re all still there — but the once small village exploded into a rollicking hotbed of adventure sports and luxurious resorts. You know it as Cabo.

The seductive waters of Cabo San Lucas hit the map in the mid-20th century when American fishermen took note of the town’s bountiful marlin supply and slowly popularized the region for affluent travelers with the private planes and yachts needed to reach the undeveloped paradise. Since then, serious advances in infrastructure paved the way to a booming tourism industry for Cabo San Lucas (“Cabo”), nearby San José del Cabo (together, “Los Cabos”) and the 23-mile stretch of connecting Transpeninsular Highway (better known as “the hotel corridor”), where many of the region’s most desirable resorts take advantage of pristine beaches and unrivaled vistas.

Today Cabo resembles little of its sleepy fishing village days. Though scrumptious seafood from the impossibly blue-green waters where the Sea of Cortez meets the Pacific Ocean is still king in Cabo, the modern focus of this resort town is more celebration than serenity. Still, for those seeking the romance of a more exclusive and enigmatic era, simple elegance and wonder remain in curated pockets, especially during those sunshine hours separating the raucous nights for which Cabo San Lucas is infamous.

Boasting more than 300 days of annual sun and an average daily temperature hovering around 80 degrees, beach life remains a popular draw for Cabo, but more for the scenery and wildlife than for swimming. Cabo’s Pacific beaches have tremendous undercurrents and are too dangerous for swimming — it’s just not allowed — and while the Sea of Cortez is much calmer, it’s what’s under the water that attracts the crowds. Once called the “aquarium of the world” by Jacques Cousteau, the abundant marine life ranges from colorful fish and charming sea turtles to noisy seal and sea lion colonies and behemoth humpback whales (not to mention blue whales, gray whales and the occasional orca). December through April is prime whale-watching season as countless pods travel 6,000 miles from the icy north to breed and raise their calves in the same waters that enticed a record 1.8 million travelers in 2017. Late summer sees the height of another mass migration as five species of sea turtle return to their birthplace to nest along the Baja Peninsula, but not all of Cabo’s wildlife is simply observed. 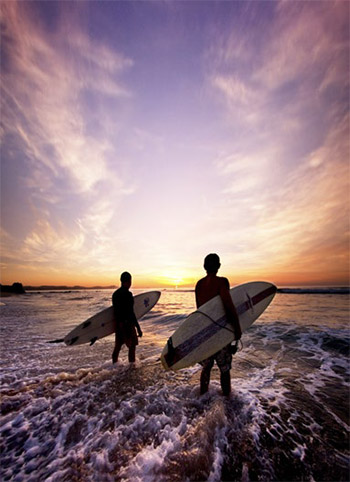 Marlin fishing is serious sport in Cabo, home to the world’s highest-paying tournament, Bisbee’s Black & Blue, among several others. For other adventure sport aficionados, these famed waters host the Los Cabos Open to Surf pro surf and music festival and, since 2017, the grand finale of the Extreme Sailing Series. Enjoying Cabo San Lucas by sea doesn’t require an athletic spirit, though. The stunning sunsets of the Pacific, especially as viewed through El Arco, the three-story natural rock arch at the tip of the peninsula known as Land’s End, draw daily devotees on all manner of craft from the most intimate private sailboats to the largest cruise ships, offering everything from romantic Champagne sails to thumping pirate parties. Most evening sails depart from the Cabo San Lucas Marina before traveling the coastline toward Land’s End and rounding El Arco to cross from the Sea of Cortez to the Pacific Ocean. The tiny sliver of sand between the two creates a double beach with the opportunity to enjoy both the calm, swimmable waters of Lover’s Beach facing one direction and the crashing, impenetrable waves of Divorce Beach facing the other. By day, inexpensive boat transfers provide access to this unique beach combo and the captivating cave formations surrounding them.

The Cabo culinary game is strong, and anyone could guess seafood is a major draw (seafood tacos and Baja chocolate clams rank high on the list of musts), but fewer are aware of the region’s burgeoning farm-to-table scene. Not far along the hotel corridor from Cabo San Lucas, restaurants like Flora Farms, Huerta Los Tamarindos and Acre launched Los Cabos to destination-level status among organic foodies, and these hot spots aren’t just dishing out hyper-local meals. Acre, constructed almost exclusively from materials found on the property, recently opened tree house accommodations on site, while Flora Farms takes natural relaxation to the next level with its new Farm Spa. Eclectic cocktails and cooking classes are available at all three. Nearby Todos Santos, just an hour’s drive from Cabo San Lucas and well worth a daytrip for its art scene and old village feel, takes note of Cabo’s farm-to-table success and adds to the region’s offerings with two popular restaurants of its own: Hierbabuena and Jazamango. 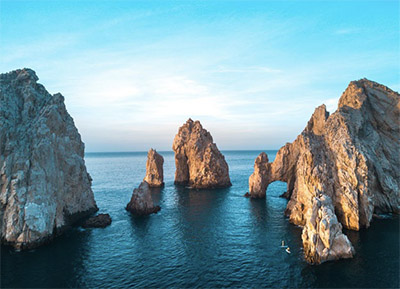 What truly separates Cabo San Lucas from its sister city, San José del Cabo, is its vivacious vibe. While San José stays intentionally sleepy, Cabo San Lucas is wide awake, especially at night. Nightclubs and boisterous bars populate most of downtown Cabo, where the party gets going as early as 10 p.m. and lasts until 4 a.m. While options are seemingly endless, some of the most popular clubs include the three-story El Squid Roe for tequila tanks and table dancing; Sammy Hagar’s Cabo Wabo Cantina for the best lineup of live music (though live entertainment can be found across Cabo nightly); and the waterfront Nowhere Bar, nearly as popular with locals as it is with travelers. For a classy cocktail in a more refined setting devoid of deafening bass and neon lights, go up. Rooftop hotel bars, particularly along the marina with views of twinkling lights reflecting on rippling water, offer optimal spots to sample the city’s tequila and mezcal scenes in style. This is where Cabo’s storied spirit of quiet elegance remains, where you can still glimpse that serene sophistication found by early visitors, high above the modern commotion but still deep in the heart of Cabo San Lucas.

Los Cabos International Airport services 21 airlines with 500 weekly connections from more than 40 destinations, and more are scheduled to launch in 2018. A 40-minute shuttle along the hotel corridor to Cabo San Lucas costs around $35 roundtrip, providing shimmering sea views along the way. Arrange transfers at the airport or through most hotels in advance. Car rentals are also available.

Where to Stay in Cabo San Lucas

GRAND SOLMAR AT RANCHO SAN LUCAS For a truly elevated experience that leaves the buzz of Cabo behind, try the waterfront spa. The treatment rooms are a network of interconnected beach huts on stilts. Carreterra Todos Santos Km. 120 $$$$$

THE TOWERS AT PACIFICA GOLF & SPA RESORT The most exclusive suites in the Pueblo Bonito resort at Quivira Los Cabos, The Towers offer the ultimate in pampering with hyperpersonalized service. Previo Paraiso Escondido $$$$$

LOS TRES GALLOS Serving authentic Mexican cuisine in a courtyard setting dotted with fruit trees, all the flavor and charm of traditional Mexico come together at this Cabo favorite. The mole dishes are particularly beloved. Calle 20 de Noviembre $$$