INSIDE THE PRESIDENTIAL SUITE of The Oberoi Mumbai in the southern part of the city, my morning stretch feels that much nicer. What could be finer after a long haul than having around-the-clock butler service, a dream pillow menu and amenities that include a personal fitness machine and a waterproof television in the bathroom?

The Oberoi Mumbai is the go-to for good sleeps, eats and unwinds. Part of the luxury hotel group of Oberoi Hotels and Resorts, the 287-room luxury property features unparalleled views of the ocean and the Queen’s Necklace, a golden crescent of lights adorning the shoreline after dark.

In a financial city that quickly morphed from its staid British colonial past into an exciting, vibrant megalopolis (more than 22 million people live here), this part of India provides proof of a country in transition.

South Asia’s largest city splays over an archipelago formed by uniting seven islands in an intricate patchwork of thoroughfares. India’s wealthiest city includes, among other bragging rights, the epicenter for the country’s decision makers, plus home to the Bollywood film industry, India’s larger version of Hollywood. Ever since the financial boom in the 1990s when IT, exports, services and outsourcing skyrocketed, Mumbai has dwelt at the center of economic activity. To boot, it is not without reason that Mumbai reportedly boasts 28 billionaire residents and ranks sixth among the top 10 global cities on the billionaire count.

And there’s no better way to explore the action with potential clients than to visit Mumbai’s financial nerve center: the Bandra Kurla Complex, lying less than one hour from the Oberoi Mumbai. A chauffeured hotel Mercedes S-350 limo whisks corporate clients along the tony waterfront of Marine Drive to the city’s first planned commercial complex, nicknamed BKC. Built in 2012 and helmed by a futuristic building called The Capital, it is an aberration from normally gridlocked Mumbai. Located in South Mumbai, the 18-story LEED Gold-certified high-rise features the world’s largest automated car parking system.

Meanwhile, a colleague back home suggests renting the private facilities of the Executive Centre on the seventh floor as an on-site meeting hub. With its advanced audio and video from CISCO and Polycom, the venue is considered a leading premium serviced-office provider. Styled in a bespoke office space design, it features Herman Miller furniture, state-of-the-art workspaces and executive lounges.

Get acquainted with your first prospective clients over gingery specialty chai tea. Located at the Sky Lobby of BKC, Tea Trails overlooks the Jio Garden and numbers among several fine-dining restaurants, cafés and lounges suitable for hosting business luncheons, brunch or tea.

India is not the United States — or Europe for that matter — so when closing the deal, consider a few basic rules of etiquette. No serious business deal should be conducted without food involved. “Don’t go to a formal meeting place first,” advises Armand Cucciniello III, vice president of a New York-based global public relations firm and a former U.S. diplomat who’s twice lived in India. “The place you pick sends a message,” he notes and further adds, “Do your homework — know your client as much as possible before meeting him or her to seal the deal.”

For lunch, the corporate crowd converges in Bandra East at the dim sum darling Yauatcha (pronounced yah-WAH-chah). The famed Michelin-starred dim sum tea house and patisserie from London caters to food aficionados obsessed with plate sharing. With two private dining rooms, mingle over steamed and fried dumpling delicacies at this eatery tucked away in the heart of Mumbai’s financial hub.

Make a mental note, however, of other lunch spots nearby. The Masala Library, a molecular gastronomy den helmed by the “Czar of Indian Cuisine,” Jiggs Kaira, sits inside the 15-story First International Financial Centre. Meanwhile, the investment-banking hub Maker Maxity is where uncanny Peruvian dishes are conceived by the Indian-born, British-based, two-Michelin-starred chef Atul Kochhar. His devotees consistently return to his Lima Restaurant and Bar for the mouthwatering plates. 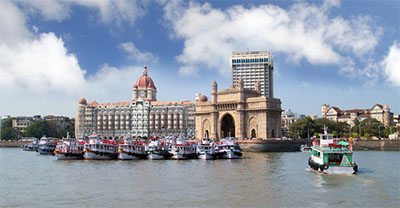 For a post-lunch excursion, avoid tourist traps and crowds around the Prince of Wales Museum and the Gateway of India, a relic from the British Raj days. Instead, head to historic Malabar Hill for an outdoor refresher, a more calming environment than the midday urban frenzy around the city’s lauded landmarks. Overlooking the Arabian Sea and Chowpatty Beach, the Hanging Gardens provide an ideal backdrop for some simple shop talk during an intimate walk around fanciful animal-shaped topiaries that flourish there.

But before the afternoon ends, make one final stop: the Jehangir Art Gallery located in the pedestrian-friendly Kala Ghoda district. Since first opening in 1952, this cultural mainstay houses exquisite contemporary Indian art and schedules temporary exhibitions. Afterward, prepare for an easy coffee break. In a three-minute walk, the artistically minded can gather inside a retrofitted barn at the environmentally conscious Kala Ghoda Café for South Indian Arabica organic coffee. Here, among the funky décor and youthful vibe, you’ll bid adieu to the local clients.

Of course, there’s time for one more meeting, but this one needs to be close to the airport. That dilemma is solved. The Ark Bar at the Courtyard by Marriott Mumbai International Airport Hotel offers a gateway for get-togethers with friends and new clients. The setting, steeped in funky cosmopolitan flair, provides open and quiet nooks. Music mellows the crowd for a relaxed vibe as happy hour gets underway only hours away from a themed Bollywood night.