Museum of Science in the City of Arts and Sciences © ED FRANCISSEN – DREAMSTIME.COM

MYRIAD CITIES AROUND the globe boldly proclaim their meeting, incentives, conferences and exhibition business among the best in the world, but in Valencia, Spain, that assertion is based in fact: In 2018 the Valencia Conference Centre was named, for the second time, World’s Best Convention Centre by the International Association of Conference Centres, a distinction held by only 10 other convention centers worldwide. Designed by Norman Foster, the venue has racked up a number of other accolades, including Best European Building by the Royal Institute of British Architects.

However, it’s more than just its award-winning facilities that draw conventions and events to the beautiful city, the third-largest in Spain and situated on the Mediterranean Sea. Other qualifiers demanding the attention of events planners the world over include nearly 300 days of sunshine per year; a wide range of hotel accommodations (more than 17,000 hotel beds); accessibility by foot, metro, tram, bus and more; an easy, high-speed rail connection to Madrid; and an international airport with flights to more than 70 worldwide cities. Beyond this accessibility, Valencia is a safe, welcoming city; no wonder it attracts some of the world’s leading events from every corner of the globe.

Another Valencian event venue with a long list of superlatives attached to its name is Feria Valencia. The oldest event organizer in Spain, in existence since 1917, it’s also the largest exhibition area in the country and one of the 10 largest in the world. Fairs, conventions, meetings, concerts — whatever the event, the 2.5 million-square-foot space with capacity for up to 20,000 people likely measures up to the task.

Its stunning architecture will be the first characteristic that strikes one as they approach the Santiago Calatrava-designed City of Arts and Sciences, a complex of scientific and cultural venues also available to host meetings and events. Located in an area of the city that was formerly the bed of the River Turia, today this gorgeous park area boasts breathtakingly beautiful buildings: Hemisfèric, an IMAX cinema; Umbracle, a vantage point and parking area; the Science Museum; Europe’s largest aquarium, Oceanogràfic; the opera house, Palau de les Arts Reina Sofia; and the multifunctional Ágora space.

For a more intimate incentive opportunity involving the Calatrava stunner, consider Sea Saffron, created by Valencia native Eduardo Aguilar. After a personalized pick-up, Aguilar or another guide brings a personal touch to a private tour of the City of Arts and Sciences. One of Valencia’s most popular sites feels intimate and less touristy with this behind-the-scenes look. What follows truly cannot be missed, as Sea Saffron treats guests to a 10-course tapas tasting atop Valencia’s tallest building at sunset. The information, the views, the company and the cuisine all soar above and beyond expectations.

It’s impossible to discuss cuisine in Valencia without mentioning paella, the Spanish delicacy born here. Bring the group to Escuela de Arroces y Paella Valenciana to learn how to make the iconic dish while also enjoying a tour of the market to purchase ingredients, perfectly paired Spanish wines and a tasting of other traditional Spanish dishes like torta. 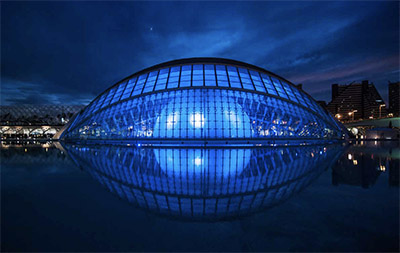 For a unique seaside location for an event or meeting, Hotel Las Arenas Balneario Resort boasts 253 guestrooms, 21 meeting rooms and more than 4,800 square feet of function space, in addition to its stellar views and convenient beach location.

But whether one chooses a city or seaside location, an abundance of hotels meets any event needs, including The Westin Valencia, with nearly 30,000 square feet of meeting space, and Meliá Valencia Palacio de Congresos, boasting its own 18 meetings rooms conveniently located adjacent to the city’s convention center.

For a city accustomed to hosting a yearly event that draws visitors from around the globe and worldwide acclaim — Las Fallas, or the Festival of Fire — meetings, incentives, conventions and exhibitions are in its DNA. Feel at home hosting any event, big or small, in the warm, welcoming and award-winning city of Valencia.

VALENCIAN INSTITUTE OF MODERN ART
Inject a bit of art into your event at the Valencian Institute of Modern Art, near the old river bed and boasting nearly 200,000 square feet of space and eight galleries.
ivam.es

MONASTERY OF SAN MIGUEL DE LOS REYES
This historic setting, dating to the mid-1500s and today housing the Valencian Library, brings a taste of Renaissance architecture and a touch of history to any event.
bv.gva.es

CHOZAS CARRASCAL
Venture outside the city limits to Chozas Carrascal … because what’s a visit to Spain without experiencing its wine? Here visitors can also indulge in the new Wine Spa.
chozascarrascal.com