MEXICO CITY HAS SELDOM SEEN the travel press limelight like its North American counterparts of Toronto and Washington, D.C., but the rest of the continent finally seems to be waking up to its wealth of reasons to visit. Despite claiming the largest number of museums in the world and housing great cultural institutions, it took Mexico City a long time to get the respect it deserves — partly because it’s had to overcome so many obstacles … the latest, a major earthquake that hit in 2017.

Every time, though, Mexico City bounces back from adversity by taking things up a notch. Despite the setbacks, each year the city gets a bit cleaner, a bit ritzier, a bit more confident in what it has to offer.

Jim Johnston, author of the popular book Mexico City: An Opinionated Guide for the Curious Traveler, says the real turning point came in 2015, when a flood of articles about the city’s vibe started showing up in seemingly every travel publication. “Restaurants, bakeries, and shops of all kinds have been opening up, many run by foreigners. This has added an edge of adventure to the city, introducing Mexicans to a wider range of products and services,” he says. “There is a big change in the perception of the city — fear has been replaced by fabulousness. In addition, the infrastructure has improved, the air is cleaner, and public transportation has improved.” 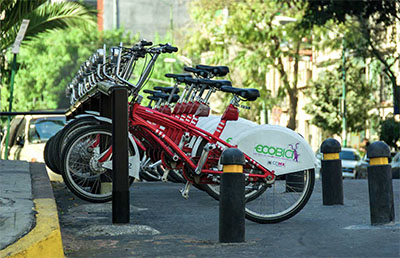 Bikes available to rent in the city © AGCUESTA | DREAMSTIME.COM

He notes Uber and several bike sharing options make getting around much easier. Plus, Uber’s arrival allows jittery travelers to avoid having to phone a radio taxi company in Spanish to get a pick-up. “Uber and Airbnb have made it easier for visitors to move around the city and get to know a wider swath of neighborhoods,” adds Lydia Carey, Mexico City writer and author of Mexico City Streets: La Roma. In addition, the city now offers many culinary and culture tour options in English, giving foreign visitors a gateway into the local culture they could not easily find a decade ago.

“Mexico City has become the hub for innovation across Latin America,” says José Pablo Toscano, CEO and founder, Jubel, a local travel startup. “Hundreds of millions of dollars are pouring in, and this has made the city much more dynamic and tech-forward.”

This sprawling metropolis still has its problems, of course, due in part to an ideal Aztec settlement becoming a non-ideal modern city. Montezuma’s capital was an island in the middle of lakes and marshes. Spanish conquistadors rode in looking like gods on horseback in 1519 and started their march of New Spain domination here. They drained the marshes and dismantled temples to build Catholic cathedrals and government palaces — which started sinking as soon as they were finished. The longneeded airport expansion keeps hitting engineering snags and cost overruns, in part due to the swampy location.

New residents and visitors keep coming, however, and the city now boasts five convention centers, more than 600 hotels and more than 53,000 rooms from budget to boutique to luxury. Visitors can easily spend a week in the center, though some companies have their headquarters in the far-flung office park suburb of Santa Fe.

The air quality continues to improve in the capital as older buses and Volkswagen Beetle taxis fade into the history books. The city’s liberal reputation also led to a thriving arts scene. “Mexico City has always been a liberal oasis,” says Toscano. “This momentum has kept pushing the city towards social reforms.” Being at the forefront of the gay rights and environmental movements brought a young and dynamic crowd into the business community.

Gentrification came on strong over the past decade in the neighborhoods of Coyoacán, Condesa, Roma and San Ángel. This is not always ideal for local residents facing higher rents, but it makes these walkable sections of the city attractive places to stay or wander around. While most visitors once stuck to a limited corridor between the historic center and wealthy Polanco, every month sees more interesting dining, drinking and shopping spots popping up elsewhere.

“There are more great gourmet food and drink options all the time, with Mexican craft beer and designer cocktails really taking center stage,” says Carey. “There are several microbreweries now within the city limits you can visit.”

There’s near-unanimous agreement the business climate for foreigners is getting better all the time. “The city is better positioned now to cater to all levels of tourism,” says Carey. “The options for design-forward hotels, high-end shopping, luxury real estate and internationally acclaimed art haven’t diminished the excellent street food, bustling markets and ancient history that make Mexico City unique. Investment is spreading out to some of the lesser-known neighborhoods still near the city center, too, like St. Maria de Ribera, San Rafael and Juárez.”

“Recent policies have been very pro-foreign investment, so it’s much easier to come in and take advantage of the many opportunities here,” says Toscano. After keeping a surprisingly low profile for decades with both business travelers and tourists, Mexico City seems finally to be finding its groove.

Things to Do in Mexico City

Museums or neighborhoods? Ruins or food tours? History or modern art? It’s easy to find what gets you excited in this major metropolis.

The most spectacular museum in all of Mexico is the National Museum of Anthropology, containing the greatest collection of pre-Columbian art anywhere. Nearly 20 acres of displays cover every period of history in a dramatic building. 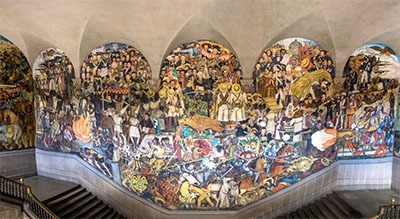 The stairs of the Palacio Nacional with the famous mural The History of Mexico by Diego Rivera © DIEGO GRANDI | DREAMSTIME.COM

Next to Alameda Park, two adjacent buildings designed by the same architect capture the city’s elegance at the beginning of the 20th century, with a mix of Belle Époque and Art Deco styles. The gilded Palacio Postal at Tacuba 1 is still used as a post office, and the Palacio de Bellas Artes at Avenida Juárez and Lazaro Cardenas houses an opera house and museum.

The huge Plaza de la Constitución in the center of the city is better known as the Zócalo. On one side of it, the Palacio Nacional features a sprawling mural by Diego Rivera. On another side sits the propped-up Metropolitan Cathedral, which took 277 years to complete. A daytrip 31 miles to the northeast is a must to see the spectacular ruins of Teotihuacán, which flourished from the years 100 to 750 and later was re-occupied by the Aztecs.

How has Mexico City changed in the past five years?
I came back from Paris five years ago, after working there for 13, so from my recent point of view there are more authentic cultures integrated here now: Korean, Japanese, Colombian and Venezuelan people moved in, just to name a few. That adds more flavor to the city, with defined neighborhoods that have their own moods and styles.

What is happening with the food scene in this culinary capital, and where is it headed?
In the culinary scene I am pleased to see a lot of original projects with a distinct identity of the person or people behind them. Some great examples are the guys from Masala y Maiz, Sartoria, Rokai group, Amaya and La Docena. Again, this brings increasing diversity to this multicultural city.

Is Mexico City a good place to do business?
I think it is, which is why in the end I came back to my hometown. I wanted to try to do business that integrated social and sustainable responsibility, and I am just starting to figure out how to do that here. Of course, like every place, you have some negative issues; I would love to see less paperwork to open and run a business, and I wish everything could be more transparent and efficient.

When you want to show off what Mexico City has to offer, where would you take visitors to eat, drink or just have fun?
We’d start with some tacos, like at Los Cocuyos, El Vilsito or El Hidalguense, or perhaps Paramo for some chamorro tacos. Then maybe have some shrimp at La Docena, Contramar or Mi Gusto Es in Narvarte. For a drink, we’d try some mezcal in Bósforo; have some organic Mexican wine at my place, Loup Bar; then go dancing at Foro Normandie or MN Roy. My breakfast choice would be Fonda Margarita, especially the beans and egg omelet.

Benito Juárez International Airport lies less than 10 miles from most hotels. The airport is situated in two distinct terminal buildings connected by train. Buy an official taxi ticket before exiting for $9–18, depending on hotel zone. Mexico City’s metro connects to the airport, but luggage is not allowed. Within the city it’s best to take Uber or have the hotel or restaurant call a Sitio radio taxi rather than flagging one down on the street.

COMING AND GOING
U.S. citizens must have a passport valid three months past departure date with two blank pages. No visa is required for visits of less than 180 days. No vaccinations are necessary.

Where to Stay in Mexico City