Long before U.S. national parks became go-to vacation destinations during the pandemic, I was a fan. Last year my tally hit 28 parks on my quest to experience all 63 of what novelist and environmentalist Wallace Stegner called “the best idea we ever had.” My most recent additions awakened me not only to the natural beauty of these best ideas but also to their variety as landscapes and in the way we travel through them. 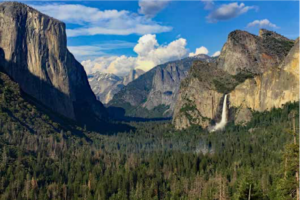 AS OUR CAR EMERGED from the tunnel, my husband hit the brakes and our jaws dropped. Once we eased into a nearby parking lot, we watched other motorists do the same. The reason: Tunnel View, an overlook in California’s Yosemite National Park. El Capitan rose on the left, Bridalveil Fall poured down on the right and the park’s iconic Half Dome rock formation shone in the distance.

We experienced Yosemite in two ways, each with pros and cons. With a car, we went where we wished and stayed as long as we wanted, but the driver couldn’t enjoy the view while keeping eyes on winding roadways, contending with traffic and wildlife poised to dart into our path. On a day-long tour booked at Tenaya Lodge, two miles from Yosemite’s southern border, we both enjoyed the scenery and our guide’s colorful backstories about park history and terrain. Tenaya’s 19-passenger customized vans feature glass sides and retractable roofs for unobstructed views of natural features towering over the roadways. The tour took us to the most popular sites; we would have stayed longer at some, less at a few.

We also could have taken the park’s free shuttles with stops at major vistas. The road to Glacier Point, a highlight of our visit, remains closed for reconstruction in 2022, with delays expected in 2023. 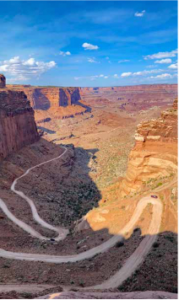 I HEARD HORROR STORIES of hours-long waits to enter Arches National Park, but on a day-long tour of both Arches and neighboring Canyonlands National Park last August, I never saw the entrance. Instead, I went through a back door by way of a 4×4 vehicle driven by a guide from NAVTEC Expeditions.

Unlike Yosemite with its waterfalls and granite peaks, these parks sit in the red rock country of the high desert outside Moab, Utah. I rode past Balanced Rock, Park Avenue and other popular spots but also went off road, jostling along dirt paths to backcountry sites only a small percentage of visitors see. I passed bighorn sheep and weathered buttes, stopped to peer at dinosaur tracks, climbed Eye of the Whale Arch and rode the steep switchbacks of the Shafer Trail. At Thelma & Louise Point I imagined a Ford Thunderbird flying off the cliff in the movie of the same name. My stomach flipped as I stood on the edge of a gorge at Gooseneck Bend in the Colorado River.

PICKING OUR WAY OVER ROCKS and tree roots, my husband and I followed a trail to the summit of Stony Man, where a sweeping view of the Shenandoah Valley and the Blue Ridge Mountains unfolded before us. On the right, Skyline Drive snaked off through the trees.

Most travelers drive and hike to experience Shenandoah National Park, a long, skinny ribbon of forest on a ridge west of Washington, D.C. Its only public road, Skyline Drive, follows the ridge from Milepost 0 at Front Royal, Virginia, south to Milepost 105 at Rockfish Gap. On one of America’s best scenic drives, no one can be in a rush at 35 mph. Traffic stopped to allow deer to pass, a doe and fawn. A spot of black on a grassy embankment caught my eye: a bear. Nearly 70 lookout points allow motorists to pull over and gaze at the Blue Ridge Mountains, part of the Appalachians, one of the world’s oldest mountain chains. Unlike the tall, craggy peaks in the Western United States, they’ve eroded to waves of forested slopes cloaked in a blue haze as the trees emit the hydrocarbon isoprene.

At Milepost 56.4 we stopped to hike Bearfence Viewpoint on one of Shenandoah’s more than 500 miles of trails. When our path crossed the Appalachian Trail winding through the park, we exchanged smiles with a group of through-hikers, their heavy packs swinging in time with their walking sticks.