TAKING PART IN A JAPANESE TEA ceremony might seem like a charming but archaic experience, with little relevance to our busy lives. But like meditation or a walk in the woods, the tea ceremony can clear the mind of the banalities of everyday life and serve as a pathway to spiritual peace. In fact, the Japanese word for the tea ceremony is chado (also cha-no-yu), the Way of Tea, which only hints at the protocols this highly choreographed ritual demands.

I learned this years ago when a fellow guest staying at the same Japanese inn asked whether she could practice her art by serving me tea. The Japanese woman apologized for her ineptitude, explaining she was only an apprentice and had much to learn. When I asked how long she’d been studying, her answer of “only seven years” stunned me. But then I watched how much attention she paid to every minute detail, from how she prepared the matcha green tea to how she served it. I realized that comparing the Japanese tea ceremony to a tea bag in hot water was like equating my haphazard bouquets to, well, ikebana, the Japanese art of flower arranging.

Tea found its way to Japan via China around the ninth century, when it was used mostly for medicinal and religious purposes, including as a stimulant for Buddhist monks during long sessions of meditation. It spread to the upper class, including feudal lords who embraced the ceremony’s rituals and constructed rustic huts just for the occasion, usually in the midst of a tranquil, landscaped garden. The tea ceremony, therefore, developed utilizing the principles of Zen and the spiritual discipline of the samurai, with an emphasis on simplicity, harmony, hospitality and decorum. 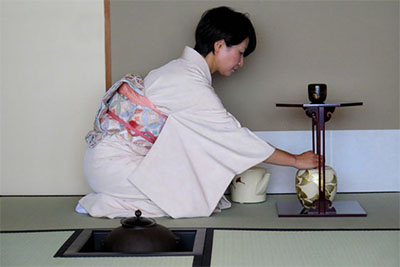 Today, chado follows a strictly prescribed procedure, with every step carrying a profound meaning and following principles laid out mostly by Japan’s most famous tea master, Sen no Rikyū, in the 16th century. Rules dictate the exact positioning of tea utensils; the lighting of the charcoal to warm the water; and each and every movement during the preparation, serving and drinking of tea. Similar to many other disciplines in Japan, the specifics of the ceremony change with the seasons, including the choice of tea bowl, the sweets served to counteract the bitterness of matcha and the simple flower arrangement that decorates the tearoom’s alcove. The tea ceremony even has its own vocabulary, and guests are assigned rankings, sitting order and duties. Because the rules are so intricate, tea schools are popular, not only for their disciplinary training in mental composure but also for their emphasis on etiquette and manners.

Traditionally, a teahouse is modestly small, big enough only for up to five guests. After removing shoes, guests gain access through a door that is so low, they must bow or crawl to enter, considered an expression of humility, with seating on the tatami floor. The host begins the ceremony by cleaning the tea utensils and then combines powdered green tea and hot water in a tea bowl, whisking them into a frothy blend. When the first guest receives tea, he or she says, “Osakini shitsureishimasu” to the next guest waiting in line to receive tea, essentially apologizing for drinking first. The second guest then repeats the phrase to the third guest, and so on down the line. It’s appropriate to admire the tea bowl and compliment the host on the excellent flavor of the tea.

In reality, however, the tea ceremony varies greatly depending on where it’s performed and how much time you can devote. In Tokyo, the easiest way to experience a curtailed version is in a hotel, with the Imperial, Keio Plaza and New Otani hotels offering ceremonies lasting 20 to 30 minutes in traditionally decorated tearooms to hotel guests and non-guests alike. 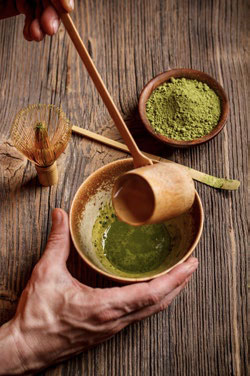 Nothing, however, beats a tea ceremony with a view of a gorgeous, landscaped garden.

Hotel Chinzanso Tokyo takes advantage of its beautiful garden with ceremonies available to hotel guests in one of its traditional teahouses. Japan’s famous landscaped gardens often have teahouses, set mostly overlooking ponds, where you can sit on tatami, drink the frothy matcha, nibble on a sweet and contemplate the view. There are also organizations around the country offering tea ceremonies and other traditional experiences, such as Tea Ceremony Waraku in Osaka and Joukeian in Kyoto.

Regardless of where you experience the tea ceremony, it’s easy to see why it has long enjoyed cult status as a way to cleanse the mind. Even samurai in the midst of war campaigns used the tea ceremony as spiritual therapy. My most memorable tea ceremony experience came in Kanazawa’s small Gyokusen-en garden, when my hostess, Ms. Nishida-san, an elderly woman dressed elegantly in kimono, said, “The tea ceremony is not a show but rather the chance to share our one moment together.” I knew I would probably never see her again, and for that instant, the peaceful garden and her poignant message made life stand still.

Narita International Airport outside Tokyo and Kansai International Airport serving Osaka and Kyoto are both readily served by limousine bus traveling directly to major hotels and by train. Tokyo’s Haneda Airport, closer and more convenient than Narita, is increasingly serving international flights, including those from the United States.