In recent years, Colombia enjoyed stability and economic growth unimaginable just a couple of decades ago. And the capital city of Bogotá shines as an example of what the nation has become as it continues to attract more business travelers and investors.

International arrivals in Bogotá are on the upswing, with more than 1.1 million international travelers arriving in 2015, representing an increase of 13.2 percent over the previous year. Of those arrivals, more than 76,000 came to attend international events, including conventions and incentive trips. In other words, Bogotá is big on business.

While the city’s historic center, La Candelaria, may date back to its 16th-century colonial roots, many other neighborhoods now exhibit examples of modernization and newfound economic stability — including the recently upgraded El Dorado International Airport, now linking the metropolis with some 43 countries. In May the destination welcomed its first flight from İstanbul, operated by Turkish Airlines, and Air Europa launched service between Madrid and Bogotá June 28 using the Boeing 787 Dreamliner. 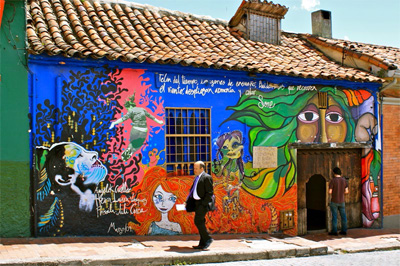 A big part of Bogotá’s success relies on political and economic stability. Colombia, indeed, suffered fewer ups and downs in recent years when compared to neighbors like Argentina, Brazil and Venezuela. Colombia has also become a safer place to visit and do business; security overall improved “significantly” in recent years, according to the U.S. State Department, and both government and the private sector strive to create a business-friendly environment.

The capital’s investment in infrastructure has been noticed on a global level. Bogotá’s TransMilenio network is recognized as a “world leader in Bus Rapid Transit systems,” according to The Economist. The city also received praise for its green initiatives; it was the first major Latin American metropolis to introduce the ciclovía — a weekly event during which major thoroughfares close to vehicular traffic, allowing cyclists, joggers and pedestrians to enjoy more public space.

International meetings and conventions, meanwhile, remain a key element of Bogotá’s strategy for economic growth. Currently, the largest meeting and event space is the Bogotá International Center for Business and Exhibitions – Corferias (generally called simply Corferias), featuring six pavilions that accommodate up to 7,000 people for meetings, trade fairs and expos. But the destination’s group appeal will increase with the 2017 opening of Agora Bogotá. With a capacity for 6,000 people, including a 3,500-seat auditorium, it will be the city’s largest convention and event space.

To help get the word out, the Greater Bogotá Convention Bureau this year became the newest full alliance partner of BestCities Global Alliance, placing it in the ranks of an international network of 11 convention destinations around the globe including Berlin, Cape Town, Copenhagen, Dubai and Edinburgh.

The city already boasts nearly 500 hotels and more than 31,000 guestrooms, with more on the way. Investors and hoteliers have been eager to take advantage of the region’s stability and economic strength, and business travelers can reap the rewards as they find more options and, in some cases, more competitive rates. All are the result of greater room inventory and a favorable exchange rate for some visitors, depending on their country of origin.

With these new developments, Bogotá further cements its role as a rising star in Latin America.

Things to Do in Bogotá

La Candelaria, the historic downtown neighborhood, makes a logical first stop for first-time visitors to Bogotá. Noteworthy attractions here include the Museo Botero, which exhibits the works of Fernando Botero, Colombia’s most famous artist, and the Museo de Oro, with a collection of more than 34,000 pieces of gold, including stunning pre-Columbian artifacts. For an amazing bird’s-eye view of the city, head to Monserrate, a lovely hilltop sanctuary reached by funicular railway or cable car. Two semi-formal restaurants on top provide a scenic backdrop for lunch or dinner.

Also popular with international travelers is the Zona Rosa, a chic neighborhood where the upscale mall called Centro Andino stocks stylish labels and a variety of dining venues offer diverse dining options. For a uniquely Colombian experience, consider a ride on a chiva, an eye-catching mode of transportation usually made from a modified school bus colorfully repainted and recast as a party bus. Upscale it’s not, lively, yes; a company called Chivas Tours offers corporate rentals with vehicles that feature everything from a full bar to a sophisticated sound system with a live DJ or musicians.

A variety of daytrips offer additional chances to connect with Colombian culture. About 1.5 hours from the capital lies Hacienda Coloma, a plantation where visitors can learn about Colombia’s legendary coffee-making traditions. Even closer to the city explore the Catedral de Sal, an otherworldly church set inside a salt mine about 30 miles north of Bogotá. It’s open for day tours, but the venue’s cavernous, dramatically illuminated interior is also available for private corporate events.

CHECKING IN WITH LUIS GERMÁN RESTREPO

Your organization promotes exports, tourism and foreign investment for Colombia. How would you describe the evolution of Bogotá as a destination for business and leisure travelers?
During the past year, Bogotá’s tourism infrastructure evolved rapidly. Thanks to ProColombia’s work, between 2010 and 2015, 14 hotel chains from Germany, the United States, Portugal, Chile, Mexico, Spain and Venezuela arrived, with an approximate investment of $452 million. Among the hotel chains that have arrived to the city in [recent] years are Hilton, Starwood Hotels & Resorts, Atton, NH Hotels and AccorHotels.

What’s driving investment in new hotels and infrastructure improvements?
Bogotá is the country’s gateway, receiving the largest number of foreign travelers arriving to the country. [Colombian president] Juan Manuel Santos’ government made improvements in infrastructure, such as the extension of El Dorado International Airport, to facilitate the arrival of travelers and, among them, investors.

What do travelers like most about Bogotá?
Other than the tourism infrastructure improvements that position Bogotá at the level of any other city in the world, the city’s unique experiences make travelers want to know more about it. You can find a variety of restaurants serving Colombian or international cuisine. You may also enjoy cultural events, such as the IberoAmerican Theater Festival, which brings together theater companies from around the world.

What’s helped put Bogotá on the map for international meetings?
Bogotá has 10 convention and event centers, more than 68 hotels with meeting rooms, and 19 social clubs or locations for meetings, which together add up to an approximate capacity of 10,000 people. This broad offer made the city attractive for meeting tourism, and it ranks 12th in Latin America as a congress destination, as assessed by the International Congress and Convention Association.

According to the latest numbers from Migración Colombia, 1,146,405 international travelers arrived in Bogota last year — 13.2 percent more than in 2014. In addition, 76,728 tourists arrived for events that include congresses, conventions and incentive trips.

What do you recommend for visitors with free time?
Travelers will find places that will allow them to admire historical locations, museums that contain the country’s history, and metropolitan parks. The city is full of culture, gastronomy, quality of service and the kindness that characterizes the local people.

The main point of entry for international visitors, El Dorado International Airport lies about 9.3 miles from downtown Bogotá; the trip takes about 20 minutes by taxi when the traffic is light, but allow more time during peak rush hours. Taxis use meters and cost about $8–9; Uber is often less expensive. The city’s TransMilenio bus system also links with the airport but is not recommended for foreign travelers with luggage.

Time zone: GMT -5
Phone code: Country code: 57 City code: 1
Currency: Colombian peso
Entry/exit requirements: A passport is required for international arrivals. Check with ProColombia for a list of countries requiring a visa for entry (travelers from Australia, the United Kingdom and United States are among those who do not need a visa).
Official language: Spanish
Key industries: Mining, manufacturing, financial services, retail, transportation

Where to Stay in Bogotá

Hilton Bogota Handsome, conservative décor; an excellent club level; and prime location in the financial district make this a top choice. Carrera 7 No. 72-41 $$$

JW Marriott Hotel Bogotá An invitingly sumptuous lobby, refurbished spa and new Asian restaurant are among the selling points of this well-located luxury hotel. Calle 73 No. 8-60 $$$$

Andrés DC One of the city’s most legendary restaurants, Andrés DC offers an expansive menu and a lively wait staff who make every meal entertaining. Cerca C.C. Andino, Zona T $$$

Leo Cocina y Cava Headed by the mother-daughter duo of Chef Leonor Espinosa and sommelier Laura Hernandez-Espinosa, the eatery specializes in thoughtfully prepared international cuisine and pairings with an emphasis on local products. Calle 27 B No. 6-75 $$$$